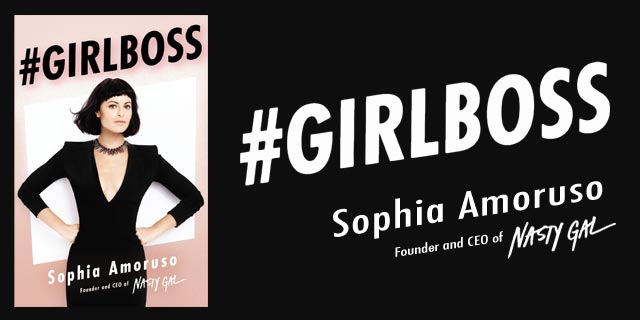 Sophia Amoruso only got a real job so she could use the health insurance to fix a hernia. The first thing she ever sold online was stolen. And her 7th grade report card is littered with the comment “Chooses to disturb others.”

“I looked about as far away from Most Likely to Succeed as you could possibly get. Anyone looking for a sure bet, in business or in life, would never have put their money on me. But that didn’t dissuade me from betting on myself,” says Amoruso.

In #GIRLBOSS, her new book that hits the shelves today, the honest, kickass confident, and unabashedly herself Amoruso tells the story of her journey to success through Nasty Gal, and the lessons she learned along the way. Nasty Gal is an online fashion retailer that started as a little eBay store and has grown to 350 employees and a valuation of over $100 million.

Amoruso is proof (as if we need more) that you don’t have to follow society’s norms to succeed. Besides her terrible grades, she was diagnosed with ADD and depression in high school. She went from job to job, selling shoes then working at Subway then checking IDs. In society’s eyes, she was lost and lacked direction; in her own, she was a rebel and an outsider.

As Nasty Gal grew, she learned that knee-jerk rebellion wouldn’t serve her in life. She learned to follow some rules – no more shoplifting – and not others, carving out her own path. The thread that runs through the book, and the reason that Nasty Gal is so successful, is a commitment to staying true to yourself, your personality, and your goals. Have no shame, speak your mind, go after what you want, and you’ll rock it.

For feminists, #GIRLBOSS is the story of a confident, powerful woman who’s not afraid to tell it like it is, celebrate her achievements, and take credit for them…damn it.

“I hate the concept of luck, especially when people try to apply it to me. Yes, it’s true: Hundreds of thousands of business fail. Mine succeeded. Was that all because I ‘got lucky’? I don’t really think so,” she says. “What I hate about luck is that it implies being devoid of responsibility. It implies that you can do nothing and then step into success as easily as stepping into a pile of dog poop on the sidewalk.”

But Amoruso doesn’t have much time – at least in this book – to devote to the challenges women entrepreneurs are facing. Frankly, she’s too busy kicking butt – which is her way of proving that women can lead and succeed:

“#GIRLBOSS is a feminist book, and Nasty Gal is a feminist company in the sense that I encourage you, as a girl, to be who you want and do what you want. But I’m not here calling us ‘womyn’ and blaming men for any of my struggles along the way.

I have never once in my life thought that being a girl was something that I had to overcome. My mom grew up doing the cooking and cleaning while her brothers got to enjoy their childhoods. In my mom’s experience, being a girl was most definitely a disadvantage. Perhaps because both of my parents worked full-time, or because I had no siblings, I never witnessed this kind of favoritism. I know generations of women fought for the rights that I take for granted, and in other parts of the world a book like this would never see the light of day. I believe the best way to honor the past and future of women’s rights is by getting shit done. Instead of sitting around and talking about how much I care, I’m going to kick ass and prove it.”

“Is 2014 a new era of femininism where we don’t have to talk about it? I don’t know, but I want to pretend that it is,” she writes. “You don’t get taken seriously by asking someone to take you seriously. You’ve got to show up and own it. If this is a man’s world, who cares? I’m still really glad to be a girl in it.”