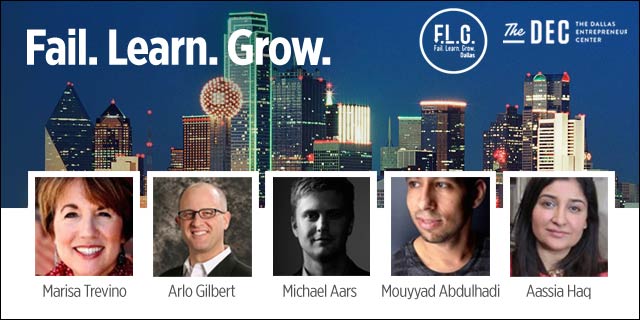 The lure of Texas-sized riches has uncovered the hidden entrepreneur in many souls. Success stories are highly publicized but there is a wealth of knowledge that can be extracted from failed startups as well.

As part of Global Entrepreneurship Week, The DEC, a non-profit to promote entrepreneurs and startups,  held their first event on Celebrating Failures, dubbed Fail Learn Grow : Dallas to do just that. Michael Aars of Tidal Wave Marketing moderated a panel discussion to do just that: talk about startup failures and what we can learn from them.

Entrepreneurs Marisa Trevino, Arlo Gilbert, Aassia Haq, and Mouyyad Abdulhadi  were speakers on the panel who were invited to discuss their past failures. They offered the following valuable advice in the form of five warning signs for startups:

One big reason many startups fail is due to market conditions. “If you don't time it right, the best idea won't work,” Marisa Trevino shared. Trevino's publishing startup failed in the late 1990s. “Biggest challenge was trying to bullhorn our message to a market that wasn't ready.” According to CB Insights , “no market need” leads with 42% as the number one reason startups fail.

Make sure you validate market need early and often.

A lot of startups are begun with an itch to solve a particular problem. Then, for one reason or another, that itch disappears, or family obligations take over; something else often comes up that replaces the startup on the priority list. “I put my priorities of being a mother over taking VC cash and moving out of SF. In hindsight, it wasn't a good decision for my business, but at the time it was a good decision for myself,” said Aassia Haq of her failed startup, AlumRise.

Mouyyad Abdulhadi and his team were working on Connect5 as part-timers. “We took too long; our startup was on the side. We spent maybe 15-20 hours a week and we eventually lost interest.”

Your startup will be your baby; it will need to be nurtured constantly. To succeed at it there will be ups and downs, and mistakes will be made, but if you are not in it 100% the chances of success will be highly unlikely. Be “all-in”.

Another big common point of failure is the team. “My worst decision was the last salesperson I hired.” laughed Arlo Gilber, a serial entrepreneur with a self-confessed seven failures. “Fully vet your potential partners.” He also noted, “I like to work with people with different skill sets than mine. This team dynamic is very crucial to the long term success.”

“We knew we were in trouble when we couldn't sustain the team.” Haq said.

It's critical to like the team you are with. You are going to be spending a lot of time together. Rarely will it work out if you and your cofounders don't get along.

No doubt there will be doubters about your new ventures. It will bring down your passion if you let them creep into your life. “We had everyone telling us: that won't work, no one is going to pay for that content. And when we didn't see big results right away, we kinda started buying into it.” said Trevino. “It all went down from then.”

All entrepreneurs are risk-takers. The doubters will always be there. It will be in your best interest to keep yourself away from all that jibber-jabber. Just focus on your next milestones, and as Taylor Swift puts it, “haters gonna hate” so shake it off.

“I have a to-do list. I give myself a reward and physically check things off.” Gilbert explained. “I also believe in taking care of my body. I schedule workouts, and hold myself to it. This gives me the energy I need to continue working towards my startup.”

Abdulhadi, who now has a successful iPhone app called Luper, said, “I tell people about it, so they can in turn remind me. Once I put it out there I have now raised the stakes of me following through on it.”

Regarding the amount of time that needs to be put in by startup founders, Aars added to the discussion. “I am a family man with three kids. I make time for them.” said Aars. “I forget sometimes; the other month, I had pulled in three straight all nights and I was passed out on the kitchen floor. I was no good to anyone in that state. Not to my family, not to my startup, not to my team, and certainly not to myself.”

Every startup will face a tremendous amount of obstacles in their journey. It's important to learn from the mistakes that others have made and constantly keep and eye out for the warning signs that could lead to a failure.

“The raw truth from the panelists was amazing. It's great to see entrepreneurs willing to share their failure stories,” shared attendee Chirag Gupta, founder of the co-working space nod.

David Feres, an entrepreneur with his own consulting firm, shared similar sentiments. “It was awesome. It was cool to have an event with entrepreneurs who are able to honestly talk about their failures and laugh at some of the mistakes.”

Just remember. “Your startup failed. You are not a failure.”

Hi, My name is Baiju and I am a technology geek at heart, writer of many things, startup advocate, runner, photographer and living life without regrets. I grew up in NYC and now I call Allen, Texas my home. I am also huge sports fan. I will occasionally mix all of my interests into a giant stew of things.