For those who weren’t able to attend the Tech Cocktail Startup Mixology Conference, here’s what you missed: a lot. The great news is that I've written a detailed play-by-play of the entire day, we've got plenty of photos and there are videos coming as well.

After a brief introduction from conference co-host, Frank Gruber, Doejo Founder and CEO, Phil Tadros kicked us off with his talk, “Why We Start: The Lifestyle”.  Tadros warned against start ups getting too bogged down in details.  He suggested the only aspect to stress is hiring good people.  “Too many people over-complicate their business strategy.”  said Tadros, “I stay laid back.”  His casual dress and calm demeanor reinforced this statement.

Cultural Shifts & Teams
Next was Microsoft’s Mark Drapeau and his presentation on the current cultural shifts and how they effect entrepreneurs. Drapeau explained what he’s labeled as the “do it yourself movement” that has taken place over the last five years:

Through social media, ordinary people are capable of organizing extraordinary movements.  Entrepreneurs need to foster these groups in order to achieve success.  He also explained the “4 C’s” of effectively communicating your company: creativity, collaboration, community, and commons.  He emphasized a company’s need to work toward a common good.  “Focus on giving”, Drapeau explained, “both society and your business will benefit.” 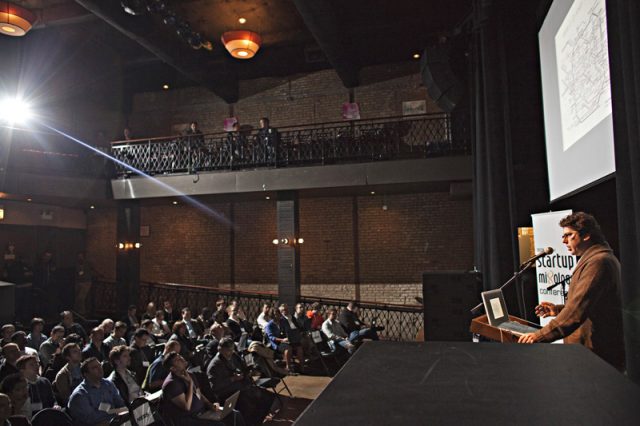 Former co-founder and CTO of FeedBurner, and the current CTO of BrightTag, Eric Lunt, gave a great presentation on what entrepreneurs need to consider when building a team. He explained that in the early days you want to fill your organization with “stem cell” workers, those who are self-motivated and are both willing and able to wear several different hats. It’s extremely important to put careful consideration into who you hire as these workers will have great influence on the attitude of future employees. Lunt also suggested a compensation strategy where the cash to equity ratio is standardized.  Not only does this make the exit process easier, it also serves to reduce tension between employees. 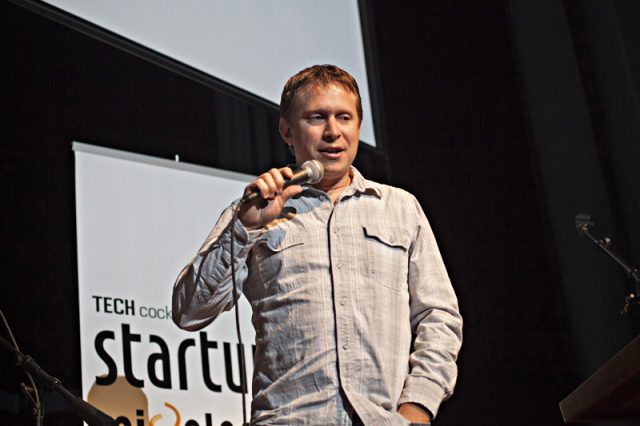 A “Team of Problem Solvers” was the topic of conversation for former CTO of Threadless, Harper Reed, and his very animated presentation.  Reed discussed the importance of talking through disagreements, as the dissent will only grow if unresolved.  “Don’t be afraid to butt heads,” Reed suggested. He also encouraged to facilitate your workers’ hobbies. The happier your employees are, the more productive they’ll be. Reed pleaded that those on top should “be an advocate.” 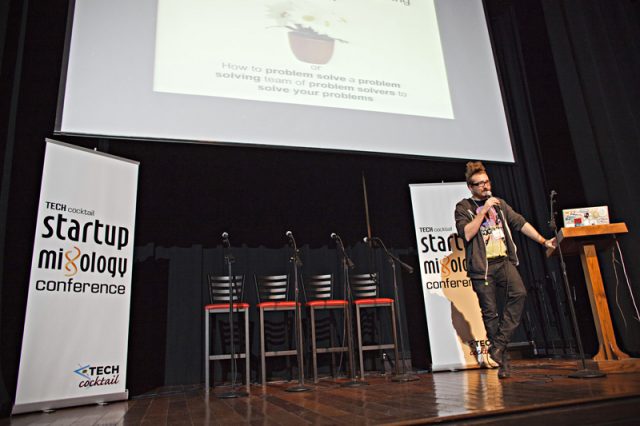 The Nitty Gritty
Next was the day’s first panel discussion about the “Necessary Legal, Accounting and Paperwork,” aspect of starting a business, with Bob Gurwin, Evan Brown, Daliah Saper, Jeff K. Singer, and moderated by John R. Dallas Jr. The group offered a plethora of valuable tax and intellectual property information.

Brown emphasized the importance to exercise caution when hiring independent contractors as the default contract gives copyright ownership to the contractor and not the employee, unless explicitly stated otherwise. Saper elaborated on this point by explaining the legal classification of what constitutes a partnership. Entrepreneurs can fall into the situation whereby they’re adding a partner to their business unknowingly.

“Lessons from the Jam Pad” was the topic for Travis Kalanick’s presentation.  For those who aren’t familiar, the “Jam Pad” is the name given to Kalanick’s home in Silicon Valley where he offers professional feedback and advice to aspiring entrepreneurs.  Kalanick made sure to emphasize the key quality inherent to all successful start-ups: work ethic.  “Funding does not solve all problems, sales and hustle solve all problems,” he explained.  As an interesting side-note, Kalanick mentioned that he was written out of the recent hit movie, “The Social Network”.  Both he and Sean Parker were present at the initial dinner with Mark Zuckerberg.  “We got him very drunk,” joked Kalanick. 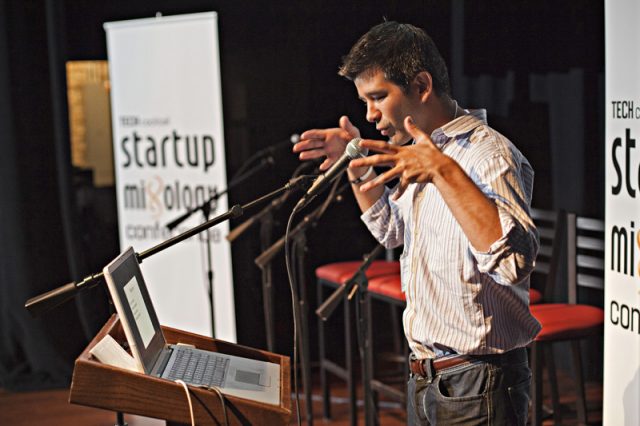 Zenzi Communications’ founder and CEO, Sarah Hardwick, provided her “PR Bootcamp” before the lunch intermission.  Attendees were provided with an effective and concise public relations and marketing checklist.  “Know your customer, create a plan, clarify your message, make it unique, target your audience, engage and relate, measure results,” and then finally, “get better and repeat.”  Hardwick emphasized the importance of giving your brand a personality.  “Put your story into the package, make it exciting, entertaining and engaging.” 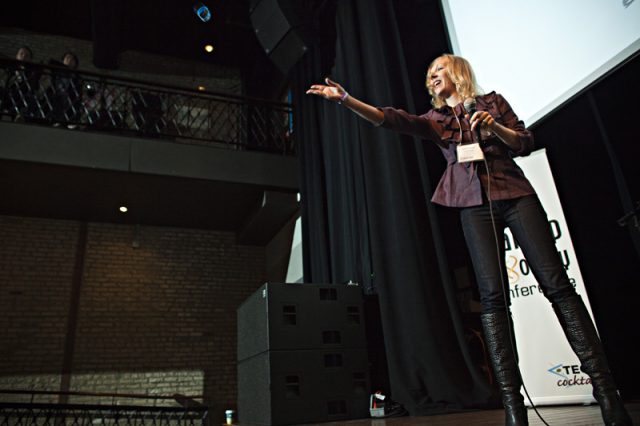 “Creativity and the Importance of Building a Brand People Love” had an all-star panel including, crowdSPRING’s co-found Ross Kimbarovsky, Partner of ColorJar Venture Accelerator, David Gardner, President of Genius Rocket, Peter LaMotte, and moderator, the writer and director of Life in Perpetual Beta, Melissa Pierce.  Kimbarovsky emphasized the importance of creating a strong emotional connection to your brand, siting Apple as an example whereby people have deep associations to ingenuity.  LaMotte added that knowing who you are, or more importantly, how your customers’ perceive you, is of equal importance.  A company’s value from the customers’ perspective can often be different than what a marketing team had intended; alter your strategy if need be. David Gardner discussed the importance of “[focusing] on delivering one, standard message.”  Giving people too much information can often overwhelm, and consequently, result in no lasting impression.  “It’s important to use the same message and logo at every opportunity.”

The Spirit of Entrepreneurship
Graphic.ly’s CEO & Chief Community Caretaker, Micah Baldwin, gave his perspective on “The Spirit of the Startup & Embracing Failure”.  Baldwin gave an interesting prediction that “the era of transparency is ending” and that we will instead move toward the “era of truth”.  “Truth is about connecting one-on-one and being honest, transparency is about telling everything that’s going on,” he explained.  Soon social media sites will focus less on how many friends or fans you have, and will instead offer a venue for more intimate interaction. 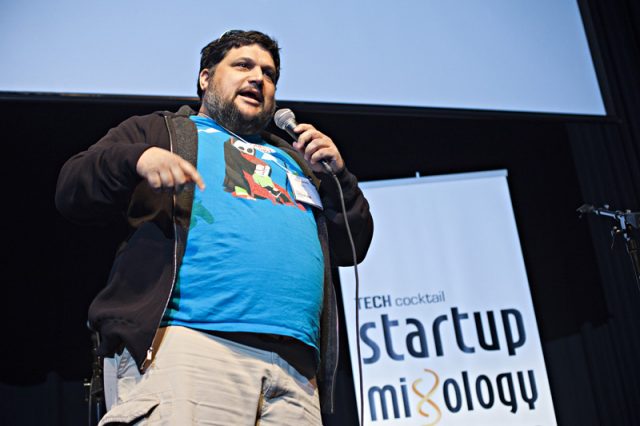 Aaron Batalion, the CTO and Co-Founder of LivingSocial, gave his perspective on what it takes to “[Find] Your Business”.  Batalion highlighted the importance of testing your ideas instead of spending too much time talking about them.  “Execution matters, ideas don’t.  Don’t talk yourself out of ideas, test them.”  Batalion also shared what was likely the acronym of the day, JSIO; “‘Just Shit it Out’ – and don’t ever be satiated.” 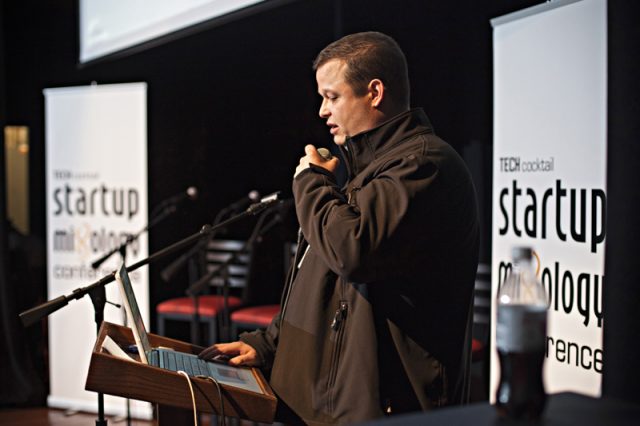 “Building for Longevity,” was the topic of conversation for Genevieve Thiers and Dan Ratner, the co-creators of Sittercity.com and ContactKarma.com.  Although it can ruin many relationships, Thiers and Ratner suggest to “start a start-up with friends”.  They’re certainly a great case study that going into business with a loved one can maintain, if not enhance, an already tight bond.  Thiers also shed some insight on the “importance of becoming the face of the industry that you’re in.”  Speaking at prominent conferences, such as the Mixology Conference, is a great starting point.

Next on stage was the “Reality of Funding” panel headed by DFJ Mercury Associate,  Aziz Gilani, Co-Founder of SproutBox, Mike Trotzke, and GrubHub’s Founder and CEO, Matt Maloney.  All of the panelists agreed on the value incubators can provide to start-ups, giving props to Boulder, Colorado’s TechStars, and Chicago’s Excelerate.  During the Q&A session, Maloney discussed the importance of sharing an adequate amount of equity with the rest of your team: 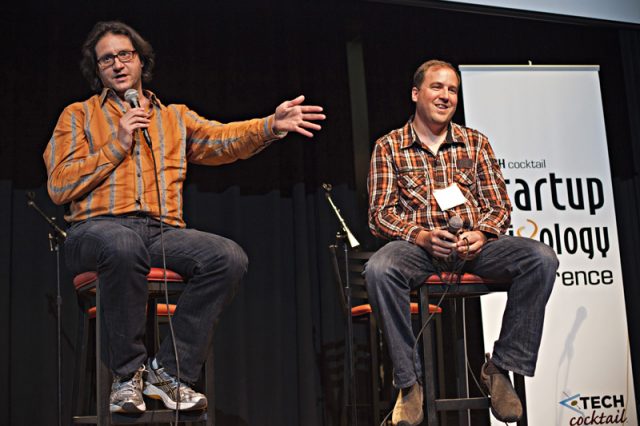 Do More Faster
Co-founders of the aforementioned incubator TechStars, Brad Feld and David Cohen, highlighted the principles of their book, “Do More Faster”.  The process of maintaing a blog, and writing a book, are very different, a point Feld made in very clear terms.  “Anyone who thinks that there’s a no gap between writing a bog and writing a book is delusional.”  Additonally, Cohen discussed the importance of not getting too deterred by an unsuccessful attempt at raising capital.  “VCs are people with money.  And like people, they behave and invest different.” 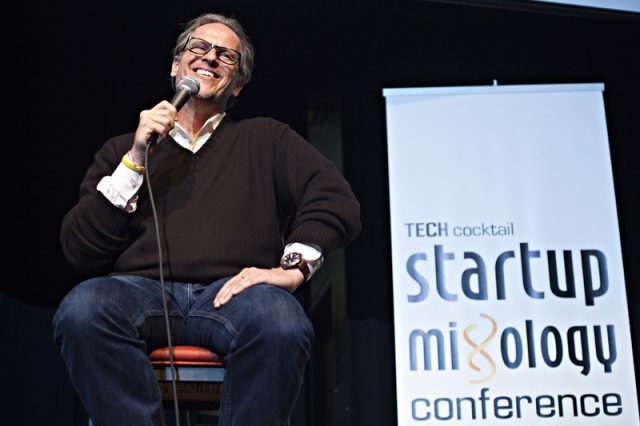 It's Always a Good Time To Start
The conference’s final session was an interview with about.me’s founder and CEO, Tony Conrad, conducted by Frank Gruber. Tony first shared his expertise on launching products in today's social world versus both five and ten years ago, launching Sphere in 2005 and Oddpost before that. He encouraged entrepreneurs to not wait for an ideal economic climate prior to starting a business. “It’s always a good time to start a company if you want to.”  Conrad also talked about finding the right fit between venture capitalist and start-up.  Venture capitalists, like entrepreneurs, have different business philosophies. “A VC is more attracted to businesses that share their personal philosophies.”

The day’s events concluded with a grand mixer at John Barleycorn in Wrigleyville.  Attendees got the chance to mingle with the day’s speakers as well as check out a number of early stage startups and sponsors.

Unfortunately this post can only provide the very tip of the information iceberg that those in attendance were able to receive first hand.  Great food, conversation, and invaluable advice was well worth the price of admisssion.  Be sure to clear your schedule for the next conference, you won’t be disappointed.