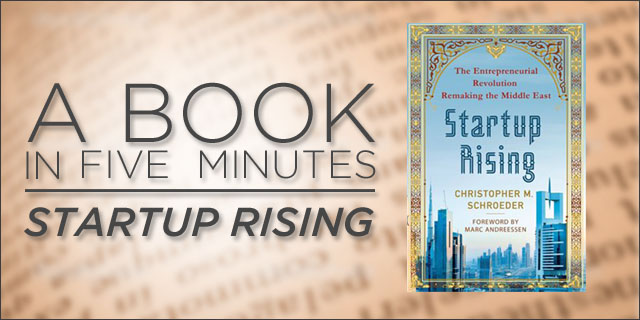 Who should read this: Investors who are interested in opportunities in the Middle East, as well as entrepreneurs who are looking to build global companies.

Elevator pitch: The vision Americans have of the Middle East is too often clouded by issues of violence and religion. This book takes a look at a different part of the Middle East – the startup scene – and exposes the possibilities and challenges in store for this emerging region, and why we might want to pay more attention to it.

Author: Christopher M. Schroeder is a serial entrepreneur – most recently, the cofounder of HealthCentral.com – as well as an advisor and investor. He also spent time working in finance in the White House and the Department of State.

We tend to think of the United States as the hub of innovation, but another hub is forming in the Arab world. Technology has made it inexpensive and easy to build a business from anywhere, and risk-tolerant investors are looking overseas for new opportunities. On top of that, there is a big market opportunity: right now, for example, only 8-12 percent of Middle Easterners have smartphones.

The challenges are clear, however, including political corruption, government brutality, and the status of women. But the revolutions now taking place reflect a change in attitude, a desire for a better world, that fits well with entrepreneurship.

One of the biggest problems for the Middle East startup scene is wasta: an economy based on your insider connections and “who you know,” particularly in government. The successful entrepreneurs of the past decade all have different approaches to it. Mohammed al-Ajlouni worked with television production and studio equipment, falling in and out of favor with the government and fighting back against wasta. Fadi Ghandour started a logistics company, an industry where wasta wasn’t as relevant because the government wasn’t paying much attention. And Samih Toukan, cofounder of Maktoob (bought by Yahoo! for $175 million), struck out a new path on the Internet, free from wasta. He’s now using his earnings to support the next generation of entrepreneurs.

The market in the Middle East is growing. While Internet penetration lags behind, young people are demanding Internet services at rates rivaling other regions, and smartphone penetration is expected to break 50 percent within three years.

To cater to them, three types of companies have emerged. “Improvisers” like Maktoob (similar to Yahoo!) and Altibbi (WebMD) adopt models that were proven successful elsewhere, with an Arabic twist. Ecommerce is the big opportunity in this space, but it faces challenges foreign to the US: confusing shipping regulations that are different in each country, low credit card usage and trust in buying online, and cultural sensitivities about delivering goods to women home alone. But companies are helping tackle these challenges: Aramex in logistics, cashU and PayPal in payments, ecommerce companies like Souq.com and Namshi, and ecommerce incubator eHouse.

The second group of companies, “Problem Solvers,” put their minds to local and regional challenges. Among them are RecycloBekia, which recycles computer electronics, and apps addressing Cairo traffic like Bey2ollak, Emokhalfa, and Ogra. Many of these companies are tinged with a social mission to better the Middle East, especially after the Arab uprisings.

The third group, the “Global Players,” are building companies that could affect the whole world. Among them are Vimov, creator of the popular Clear Day app (formerly Weather HD), Instabeat, and Cardio Diagnostics.

The Middle East also has the potential to be the home of “leap frog” innovation, new and disruptive technologies fueled by the region’s unique culture and history. The areas for opportunity include mobile, solar power, and social networks.

Mobile. Middle East governments have gone from a monopoly on telecom to auctioning off mobile licenses, opening up competition and dropping prices. Some of the big players include Etisalat, which launched a suite of mobile services to help pregnant women stay healthy, and Vodafone Egypt, which opened an accelerator to invest $3 million in early-stage startups.

Solar power. The Middle East is also ripe for solar power, with its large deserts. KarmSolar hopes to leverage solar power to help access the largest bed of fresh water that lies beneath northeastern Africa, and then bring that water to farmers to make new areas of land arable.

Social networks. Following the Arab uprising, projects like 18 Days in Egypt and CircleTie are working on social networks that can bring people together in new ways.

The growth of an ecosystem

The three crucial elements of an ecosystem are investors, conveners (who help entrepreneurs connect), and recognizers (who give them publicity and recognition), and the Middle East has all three.

Investors include the Jabbar investment fund, the Flat6Labs and Oasis500 accelerators, and the N2V foundry. Conveners include events like ArabNet and the online resource Wamda.com. And Recognizers include startup competitions like Ebda2 and the MIT Business Plan Competition.

But challenges remain, of course. Regulations can be complicated and uncertain. The culture favors risk-averse investment in hard assets, and a less crazy work ethic. Technical talent is still scarce. And the region needs success stories that can inspire the next generation of entrepreneurs.

Education is another challenge. Although the Middle East has spent a lot of money and effort on education – allowing many people, including women, to go to school – the region still has low secondary and higher education enrollment and high illiteracy rates. More troublingly, only one-third of college students are enrolling in science and math.

But entrepreneurs are forming organizations to help solve the problem from the bottom up. INJAZ Jordan, similar to Junior Achievement, offers classes that focus on entrepreneurship, developing business plans, and learning to express your opinion. Ruwwad, a youth center built by Ghandour, offers everything from legal advice to job training to IT and English classes. But most of all, the community organization teaches youth that they have a voice: a voice that will be respected by others and engaged in dialogue, and a voice that can speak out to solve community problems.

Technology offers major opportunities to improve education in the Middle East. First of all, the Internet simply opens young people’s minds to the possibilities that exist for them. Online education can bring quality learning to more people, including adults and especially adult women.

Social media and technology are making it easier for women to create businesses and have a voice. Many of their companies provide services in Arabic, help families achieve work-life balance, offer collaborating crowd-sharing platforms, and sell products to women. But women entrepreneurs will have to overcome the external obstacles that all women entrepreneurs face, and the internal guilt caused by time spent away from family and children.

Islam may affect which companies investors choose to invest in, considering the rules of Islamic finance and whether the company supports Islamic values. Islam also creates opportunities for startups: AnaBasalli is a mobile app for tracking prayers, while Ideal Ratings helps investors figure out if businesses are Sharia-compliant.

On the flipside, technology may start to influence the future of Islam. Social media gives the new generation a transparent platform to openly discuss and resolve issues, something that Muslims say is a problem for their religion.

For Americans, the violence and unrest in the Middle East obscures what else is going on there. For one, there is a bottom-up movement toward entrepreneurship and problem solving. The economy is growing, along with other economies in the East. And through technology, young people are learning values and behaviors that are quite similar to those of young Americans.

The big question is how fast the governments will adapt to these changes, rather than restricting Internet access and infringing on privacy. But they will have to eventually, especially if entrepreneurs start to “vote with their feet” and move to other countries.

Americans can rethink their views on the Middle East by looking at its future, not its present; by looking at the bottom-up movements, not the top-down government control; and by engaging in real dialogue with its people.

In the style of Sarah Lacy’s Brilliant, Crazy, Cocky, this narrative traces the stories of entrepreneurs across the Middle East, from Egypt to Jordan to Lebanon. As such, a summary really can’t do it justice – the heart of the book is not the arguments, but the detailed anecdotes and personalities of the entrepreneurs that Schroeder describes. You get to follow his journey across the region and get a glimpse into the lives and mindsets of the entrepreneurs on the ground.

That said, two of the biggest issues that Americans are curious about, religion and women’s rights, were given only a short chapter each in the book. Although these are incredibly weighty topics – I don’t envy the author’s task in writing about them – I still think more could have been said and more examples described. Our picture of Middle East entrepreneurship is still incomplete, although Schroeder has gone a long way toward filling in the exciting details.