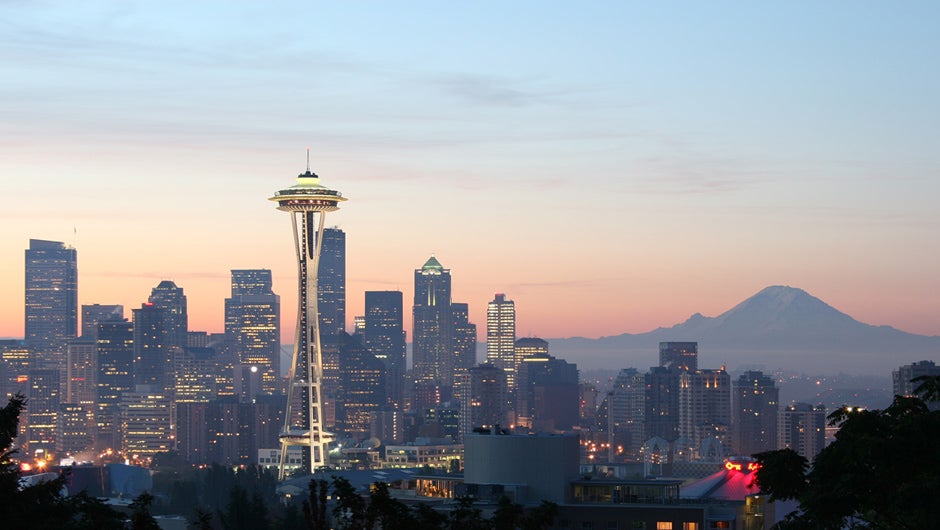 Amazon, Starbucks, Microsoft, Boeing and Blue Origin are just some of the big company names that are housed in Seattle. It's also one of the hottest places to launch a startup. In this #StartupsEverywhere series we talked with Brett Greene and Red Russak, Founders at New Tech Northwest about the startup activity, how companies have nurtured the ecosystem, available resources, funding, and more. What are your respective roles in the greater Seattle area startup ecosystem?

Brett Greene: I’m a community builder and connector. As the cofounder of New Tech Seattle and the founder of New Tech Northwest, I run the largest monthly events for technologists and entrepreneurs in Seattle, Bellevue, and Tacoma. We have over 30,000 members and over 600 monthly attendees at regular meetups. We bring everyone together under the philosophy of “what are you up to, and how can I help?” to make great things happen for each other and the community as a whole.

Red Russak: Since 2009, I’ve been an active startup leader in the greater Seattle area. I have achieved this by partnering with Brett to co-organize New Tech Seattle, as well as the Cannabis Tech Meetup for all the canna-crazed entrepreneurs ready to tap into this newly formed industry. Beyond event creation, I have actively managed Seattle’s largest startup event newsletter, Startup Digest, and have worked full-time at a startup called Apptentive for the last 5 years.

Can you tell us more about what New Tech Northwest does?

Greene: New Tech Northwest is an umbrella resource for the Pacific Northwest tech community for people to come out of their silos and contribute not only to each other, but also to our ecosystem. We bring smart, talented people interested in innovation together to have fun, learn about new or unique technology, and share resources to help each other take their next career steps and build companies. Many people find the fast, fun, ‘neighborhood block’ environment of our events to be refreshing and helpful.

Red: I agree. Broadly, Seattle is applauded for attracting external (both domestic and international) talent to our city, and New Tech opens the door and integrates those people into our greater community.

What’s the most exciting thing that has happened for New Tech Northwest in the past few years?

Greene: We were one of 50 meetup groups to be invited to attend the first ever Tech Meetup at the White House in April of 2015. In addition to that, we also hit 30,000 members last year.

Red: And coming up, we’ve got our five year anniversary! Seattle is a well-established tech city. Why is it an ideal place to start a startup?

Red: Seattle is home to some of the largest and most recognizable tech brands in the world (Amazon, Starbucks, Microsoft, Costco, etc.), and those companies do a great job of attracting talent. Many of their former employees go on to start their own companies. Being a startup in Seattle means accessing the fruits of larger, well-established companies’ labor—from the talent they provide, to having the opportunity to collaborate and/or service those companies directly.

Greene: In addition to the large tech presence here, there are a lot of other factors that make Seattle an ideal place to build a startup. We have an environment of collaboration, a laid-back but focused attitude, connections to multi-national companies, angel groups, venture capitalists, over 300 tech meetups, and a local, world class university, not to mention over 55 colleges and universities across Washington state.

What is the biggest challenge you face in the greater Seattle area?

Greene: I’d say the biggest challenge is funding. We have a good angel and venture capital community, but there are not a lot of them as compared to cities like San Francisco and New York. We have great companies that report having to go to San Francisco for their initial funding after trying to go through Seattle channels first.

What unique resources does Seattle provide entrepreneurs that they can’t find in traditional tech hubs?

Red: When comparing Seattle to New York, we find that our natural resources and overall access to nature and outdoor activities is a huge differentiator. When aiming for work-life balance, knowing that you can escape the city to the mountains in under 30  minutes is a huge deal. Another big perk is the cost of living. Seattle is a lot more affordable than New York or San Francisco—and our metro system is a lot younger and cleaner!

Are there specific public policies that have enabled innovation or startup growth in your ecosystem?

Red: The city of Seattle purchased my company, StartupSeattle.com, in 2013 and they have turned it into what is now The Startup Seattle Initiative. This is a great example of our local government getting involved in the promotion of the startup ecosystem and fighting to improve the inclusiveness of the tech community.

Greene: Yes, that was definitely a huge win to have the city become so intimately engaged in and supportive of your work. Are there some startups to watch coming out of the greater Seattle area?

Greene: There are so many great companies growing in our ecosystem, but to name a few:

Red: I’d also add that if you're not yet following Apptentive, you should be. Apptentive is helping the world’s largest brands get feedback from their customers. It’s a fantastic company to work for and it may only be a matter of time before I personally have the opportunity of working with you (the reader), as well.

Read more about ecosystems around the country here at Tech.Co