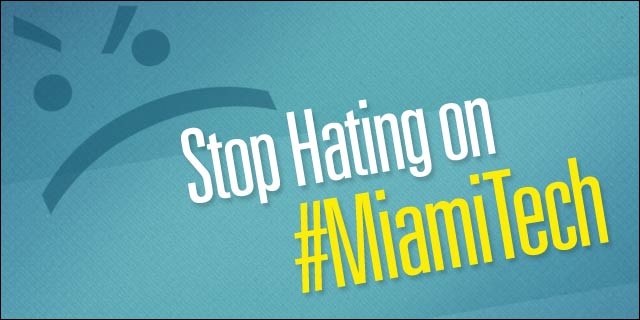 First it was Miami Beach Mayor Levine telling the Washington Post earlier this year that the idea of turning Miami Beach into a tech hub was “the dumbest idea in the world.” This sparked an outrage amongst the community like never seen before, both from tech leaders and those dying to ride the media bandwagon, to respond with dismay.

This week, a comment from a Silicon Valley investor whose company funded DropBox, AirBnB and Reddit, Sam Altman, President of Y Combinator, triggered a soul-searching discussion amongst the community. He recently visited Miami for The Atlantic’s Start-Up City: Miami. In a recent interview with WLRN, Altman said the reason none of the Y Combinator-funded startups are from South Florida was because, “I think you can say that it is not usually listed as one of the top startups cities,” he explains.

Here are just some of the comments:

“Miami is a startup city. We don't do ourselves justice. People say London, Bogota, etc., etc. We are doing more than most any international city. In the USA, I'd say we are top 15, and we were not even in the conversation 2-3 years ago. That kind of growth isn't slowing, it's accelerating. Hate on yourselves if you want. I'm a lover. I love Miami Tech!”

“This is not a Startup City, it has more to offer than just startups. It is a city with rich culture, a hub for the Americas, it is the HQ for many Valley Startups that want to enter growing markets…I think that subject has been discussed a lot, but I don’t understand why everyone wants to be like Silicon Valley.”

“Everyone wants to be the next Silicon Valley because it’s a place that attracts talent from across the world. By comparison, Miami can’t even retain it’s own talent-have any conversation about local talent in Miami and it’ll take about 90 seconds for the term “brain drain” to get dropped.

“Thinking we will be the next SV is ridiculous. I don't want us chasing that. I want us striving to be a viable alternative for companies who want to enjoy our culture, our lifestyles, and our environment, and not have any of the above prevent them from building world class companies.”

“There has to be a healthy balance of being rah-rah while realistic without being delusional or a cynic (which, yes, I can be) I'm for calling Miami out because we need to be realistic – I am SO TIRED of “Miami will be the tech hub of the future” pieces written by PR firms because it's all talk and no action – but there has to be solutions to move Miami forward or else it's too easy to give into all the negativity.”

As a community, we’ve been having this conversation for a while, which has been fruitful and encouraging. However, one thing we can all agree on to move the conversation forward is:  Miami should not aspire to be the next Silicon Valley.

As Bred Feld says, “A startup community has to tap its ‘natural resources.'” “They may be physical, intellectual or cultural, and the combination is unique.”

Silicon Valley has unique characteristics just like every city does, and every city and community should focus on their unique characteristics. Miami should learn from the lessons that caused Silicon Valley to become the ecosystem that it is, but not try to duplicate it. We should also be a bit more patient; resilient but patient. We cannot become Boulder in a few short years, we need to recognize that it takes a long time and it’s a journey.

As Alfonso Guerra of Apokalypse Software Corp. rightly commented on the post:

“Residents in the community need to learn how to act like a community, rather than each person chasing their idea of what Miami *should* be. Learn more about *who* is here, and collaborate with them, and build upon those relationships. Like them or not, they're not your competitors; and helping them strengthens the ideal you're hoping to create. Ignoring them, or worse sabotaging them, is not only better for those regions that are already world-class, but lessens the likelihood of your hopes for success in Miami.”

So what if Altman hasn’t considered Miami a startup hub just yet? As Thomas Lacker of .CO commented: 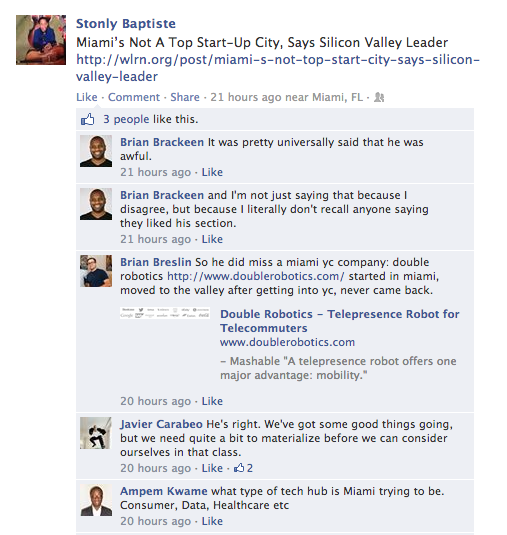