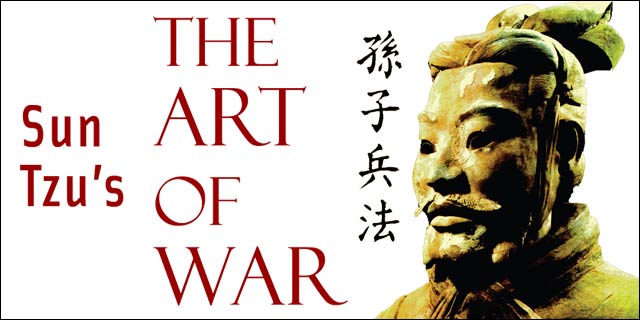 Chinese military general Sun Tzu is considered one of the greatest strategists and tacticians of all time. He wrote an ancient Chinese military text called The Art of War (a must read) that has been adapted for use in teachings on leadership, politics, and business today.

Sun Tzu emphasized the importance of positioning in military strategy. His advice can be applied to startup founders, who are constantly faced with the pressure of leading a company and making difficult decisions. Here are 10 pieces of advice from Sun Tzu for leaders to reflect on. Apply these to your strategy in 2015:

1. “A leader leads by example not by force.”

2. “Strategy without tactics is the slowest route to victory. Tactics without strategy is the noise before defeat.”

3. “The general who advances without coveting fame and retreats without fearing disgrace, whose only thought is to protect his country and do good service for his sovereign, is the jewel of the kingdom.”

4.  “Management of many is the same as management of few. It is a matter of organization.”

5. “Swift as the wind. Quiet as the forest. Conquer like the fire. Steady as the mountain.”

7. “A skilled commander seeks victory from the situation and does not demand it of his subordinates.”

8. “Even the finest sword plunged into salt water will eventually rust.”

9. “The greatest victory is that which requires no battle.”

10. “There is no instance of a country having benefited from prolonged warfare.”