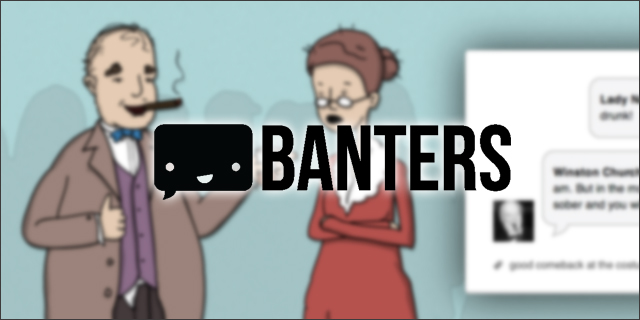 The entrepreneur that brought you a wealth of hilarious and embarrassing text messages is now devoting her time to Banters, a platform for sharing quotes.

Cofounder Lauren Leto started the site, then called Bnter, in 2010. It recently changed its name to Banters and launched a new iPhone app that integrates with Siri for recording quotes. (There's also an Android app.)

Banters lets you add quotes from friends or famous people, “like” quotes, and submit comments – a clean and simple complement to all the apps out there for collecting photo memories. You’ll find lots of hilarious repartee, but also a few serious entries:

Below, Leto explains why she developed Banters and the innovative ways people use it.

Tech Cocktail: After Texts From Last Night, why did you launch Banters?

Leto: I've always had a passion for celebrating great moments between friends. I don't think I'll ever stop launching companies to explore conversations. I love what TFLN does with anonymous, hilarious, curated text messages and I love Banters' broad platform for saving any type of conversation.

Tech Cocktail: I imagine Banters can be used in many ways – such as collecting memories or just making others laugh. What are the most popular uses?

Leto: There are a few different, popular ways. Lots of offices (such as Levo League) use Banters to show off their company culture. Plenty of parents use Banters to save the things their kids say. And there's always those groups of friends who are trying to make each other laugh.

Tech Cocktail: What’s one of your favorite exchanges?

Tech Cocktail: What is your long-term goal for Banters?

Leto: I think Banters is going to make people realize the significance of memories behind conversations among their friends. Everyone takes and saves photos of their life, we're for the conversations.