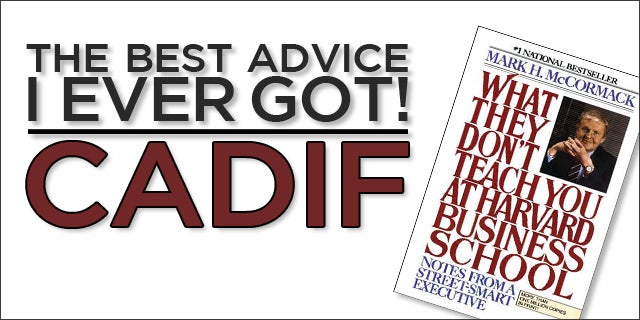 In the days before satellite radio, smartphones, and iPods, I devoured books on tape while driving. My first job was at IBM in San Jose (where they had a large manufacturing facility). They had a library with a whole bunch of business books on tape (yes, cassettes). I listened to as many as I could. It was a habit, and I had an insatiable appetite. The Psychology of Selling by Brian Tracy is particularly outstanding, and I recommend it to anyone doing anything in any walk of life that involves ever dealing with another person. But the one lesson that really stuck was from Mark McCormick’s book What They Don’t Teach You at Harvard Business School. It is a common-sense guide for how to get along and be effective in the business world. As a young, eager employee, I lapped it up.

The ONE THING I remember from this book was this:

I had an IBM-issued “Think” sign on my desk, and I had a post-it note on the backside (so I could always see it but no one else could) that said “CADIF.” It stands for:

Time and again, through stints at large companies, in academic settings, and through many startups, I have invoked CADIF. Particularly the last bullet: Immediate Follow-up. Note that it does not say, “Follow up on everything.” It says, “Follow up immediately.”

Do you handle emails promptly when they arrive, or do you let them fester in your inbox? When you get a new sales lead, do you act on it aggressively? When you know you should send a thank you note, do you do it quickly? Is your desk clean, or is it cluttered with out-of-date correspondence, magazines, and other garbage? If you run a company, are your financial statements up to date? Have you been putting off having a difficult conversation with an employee? If an investor that you pitched to asks for more information, how quickly do you send it? Do you let dishes pile up in the sink, or do you attack the problem knowing that you’ll need to do it eventually anyway?

You’ll find that if you have the propensity to procrastinate, thinking CADIF will immediately erase that temptation. When doing the laundry suddenly becomes more appealing than writing a memo to your shareholders, invoke CADIF.

I have found repeatedly that the best entrepreneurs, by far, are the ones who follow up immediately. When something needs to be done, they just take care of it. They don’t procrastinate, they don’t let it linger, they don’t get immobilized with indecision…they just do it. They’re the people who say they will send you some information, and it arrives before you think about it again. They’re the salespeople who promise a proposal, and they send it before you have time to solicit a second bid. They’re the people who, when they meet someone they want to hire, immediately seize upon the opportunity. They’re the potential employees who send you a thank you note before you’ve had a chance to huddle with your team to discuss their candidacy.

The opposite is also true. People who hesitate, vacillate, and don’t attack their to-do lists with a vengeance are not cut out to be entrepreneurs. I wrote about this in a recent post:  “A Bias for Action.”

You really can’t imagine how often when I’m tired, frustrated, and could easily vegetate on the couch, procrastinate, or make excuses, I find the energy just by thinking of this simple acronym. Invoke CADIF.