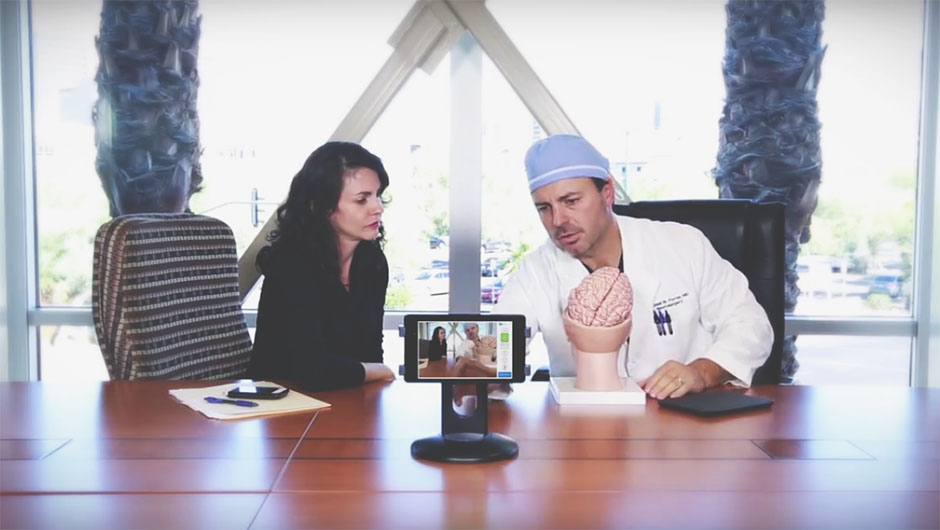 Throw this into the category of “I can't believe no one's done this before.” But in this case, “before” would have to be prior to about eight years ago, because that's about the time the idea for The Medical Memory was hatched.

Phoenix, AZ-based neurosurgeon Dr. Randall Porter personally faced the frustrations that many family members of patients do. His father was sick and Dr. Porter could not be there for all of his medical appointments. He was left to depend on his father's memory and often had to call the doctor himself to get all of the information.

“My father was diagnosed with prostate cancer in 2003. I consider him a very intelligent man–PhD in economics from the University of Chicago, my mother was a nurse and a social worker, and every time he went to the doctor there was the inevitable phone call of ‘what did the doctor say?' And it was clear to me they were only recalling a fraction of what they were told.”

Like many others, he wished there was a recording available of his father's doctors appointments so he could see for himself what had taken place rather than relying on the memories of others. However, unlike the others, he actually made this wish a reality. He developed a secure, HIPAA compliant way to record doctor appointments so that guessing never had to be an option.

I had a chance to talk with Dr. Porter and Lucas Felt, president of The Medical Memory, about challenges they have faced, future applications for their product, and the Phoenix startup scene.

What has been the biggest challenge so far?

Obviously, the purpose of recording appointments is to make the doctor's job (as well as the patient's life) easier. The last thing they'd want is to create more work for the doctors. So a major challenge has been the workflow. How to make the sign up, recording, and emailing of the completed recordings flow seamlessly with minimal work for the doctors and other medical staff.

“We can't slow them down. We can't increase the hassle factor to their day. We're just capturing on video what they're already doing. So that's the problem with telemedicine, which is a big industry, and it has its place, but telemedicine is conferencing with patients. It requires a huge infrastructure, hardware, software… This is just recording what we're already doing.”

Do you see this being used in other industries?

“As far as bleeding into other industries, I think that there's terrific opportunity when you look at consultative market space and how we can help people doing fee for service or elective surgery better communicate their service to their patients.” said Dr. Porter. “But also a really interesting space is the clinical trial space. One of our clients who just came on board is in the cancer sector and does a lot of clinical trials. And for them, they have enormous consent for them to go through. So we have a service where we can do a canned consent where it just adds another capability for patients and providers to be assured that people are understanding what all is in that consent.”

Aside from using the recording functionality for consultations and clinical trials, Dr. Porter also sees a future for his product in helping doctors with voice to text translations.

What are your thoughts on starting up in Phoenix?

“I think what's been really unique about Phoenix is that there's very much a growing culture here. There's a lot of IT startups that are here and the city of Phoenix and the state is getting behind and supporting the culture. It's been fun to see some of the things that have been opening up, like SkySong at ASU, some of the VC groups that are putting outposts here, how the city is getting involved, and the communities that are being built.”

The Medical Memory team is currently at seven and growing. If you didn't take the time to read (because words are hard), here's a short video that describes exactly what this company is doing.