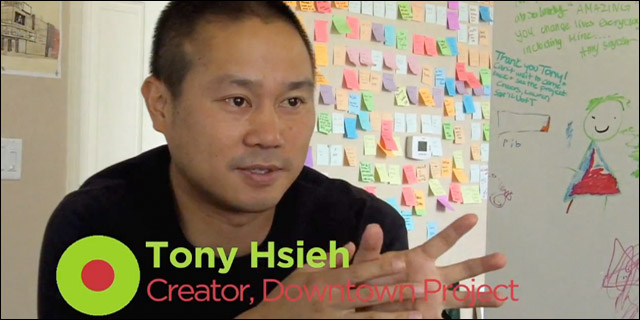 “Our goal is to make Downtown Las Vegas the most community-focused large city in the world – in the place you'd least expect it.” – Tony Hsieh, Creator, Downtown Project

It's up for debate as to what Zappos CEO Tony Hsieh possesses more of – money or ambition – but there's no question that it'll require an inordinate amount of each to achieve the very lofty goal that his Downtown Project team has laid forth. Hsieh has already invested $350 million of his own money into the project (here's how the funding is being allocated). His cast includes those plucked straight from Zappos, such as Zach Ware, who heads Urban Development, as well as recruits from outside of Vegas, including Andy White, the former executive director at BoomStartup. The common ground this group shares, however, is an absolute buy-in to Hsieh's vision – making Downtown Las Vegas the most community-focused large city in the world.

Tech Cocktail interviewed Hsieh to learn more about the Downtown Project. The full interview at the bottom of this post is worth the watch, but for those who don't have 8:43 to spare, below are some of the highlights.

1:11 – Hsieh explains how the project will be more community-centric (i.e., hands off) than some might assume – taking an “anti-master-planning” approach. His statement is solidified with the array of colorful post-it notes in the background, which is the wall of his apartment. Each post-it represents a project submitted by a member of the community who would like to see it developed. Ultimately, the Downtown Project will help enable these projects through funding but will offer little help in terms of manpower, putting the onus and control back into the hands of the community.

Inspiration behind the Downtown Project

3:08 – Originally, Hsieh was looking to “build a campus like Nike, Google, or Apple,” but ultimately decided against this because “they're great for employees, but they're very insular . . . They don't integrate with or contribute to the community.” He ends his answer a bit more candidly by stating that one of the goals with the Downtown Project is to recruit and retain employees to Zappos.

Density and the Downtown Project

3:44 – During my recent tour of this project, a book titled Triumph of the City by Edward Glaeser was mentioned repeatedly as playing a foundational role in the theories behind the Downtown Project. One of the principles of the book discusses the importance of density, as productivity per person increases 15 percent each time a population doubles. Conversely, as Hsieh notes, for a company, production per employee tends to decrease with growth. Zappos will seemingly avoid this by creating a “weird hybrid between a city, a corporation, and a community.”

Additionally, density serves to “accelerate serendipity” – a theme pervasive across both the Downtown Project and Zappos. “We actually lock all the doors, even though the back door is closer to the parking lot, and force employees to go through the front door…because that will increase the number of collisions,” says Hsieh. Forced collisions are some of the many charms of Hsieh's Downtown Project.

Upon arriving to Downtown Las Vegas and overlooking the city from my 25th-floor view at the Ogden, I was surprised by what I saw – nothing. Most of the space was vacant and/or parking lots. Upon receiving the informational tour of the Downtown Project led by Andy White, I quickly revised my perspective. What surrounds the Ogden, instead, is potential.

Amongst the many projects that engulf the area (view a map of the Downtown Project here), Container Park is perhaps the most interesting of the bunch – as evidenced by the giant flame-spraying grasshopper. 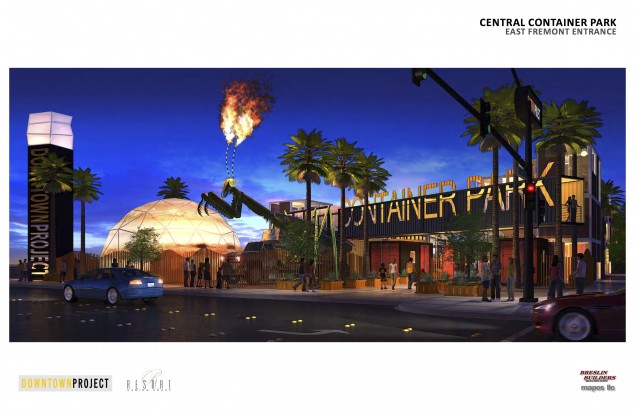 If you're not intrigued, the part of your brain responsible for intrigue is broken.

6:04 – Hsieh gives us better insight into Container Park and what will constitute the space, including a beer and sausage garden, an artesian wine and cheese shop, a Mexican restaurant, a BBQ restaurant, a kid-friendly park in the center, and a music stage on one of the far ends of the park.

7:10 – With a background in tech, Hsieh admits that he's accustomed to a fast product cycle, stating “you can go from idea to launch in 24 hours – if you have enough Red Bull.” Building a city, as it turns out, takes longer. Consequently, Hsieh says that staying patient is the most challenging aspect of the Downtown Project.

7:46 – The biggest surprise for Hsieh is the amount of interest this project has garnered from people outside of the community (i.e., you and me). The interest has culminated into weekly waves of visitors, and the monthly speaker series has become “almost like a TED conference,” according to Hsieh.

Watch the full interview with Tony Hsieh below.