A wealth of research went into this ranking, including 11,000 surveys by entrepreneurs and experts in the past five months, 200 interviews in 25 countries, and research by Deloitte, CrunchBase, Orb Intelligence, Global Entrepreneurship Network, and other local partners.

In addition to an overall ranking, each city is ranked for Performance, Funding, Talent, Market Reach, and Startup Experience. Here are the top 20 startup ecosystems (graphic by Compass): 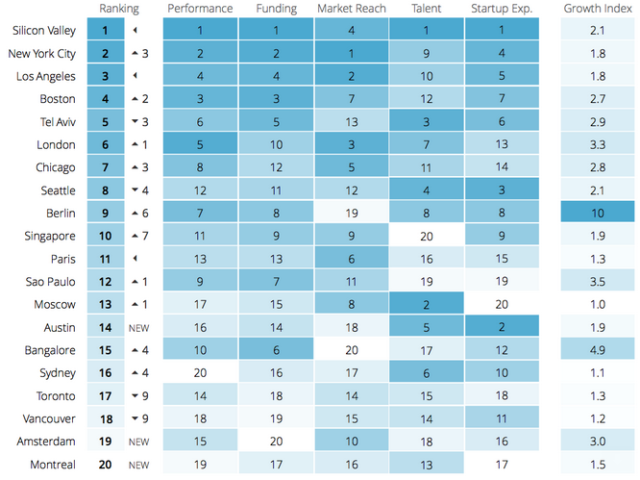 The last time Compass released a startup ecosystem ranking was 2012, and a few things have changed since then. New to the list are Austin (#14), Amsterdam (#19), and Montreal (#20). New York moved up from #5 to #2, while Seattle dropped from #4 to #8. The Asian cities of Singapore and Bangalore also moved up significantly.

Also in 2012, the percentage of women in startup scenes around the world was worryingly low, at an average of 10%. Today, that average is up to 18%, and Chicago (the most gender-diverse startup scene studied) has 30% women – still low, but heading in the right direction.

Although Silicon Valley continues to dominate, Compass suggests that parts of that domination won’t last forever. In terms of exit value – the amount of money local companies are earning when they sell or IPO – Silicon Valley has grown about 50% over the past two years. Meanwhile, other cities are seeing tremendous growth that might catch them up to the Valley soon – like Bangalore’s 5x growth and Berlin’s 20x. While Silicon Valley doubled in VC investment growth from 2013 to 2014, Berlin grew 12x and Bangalore 4x.

China, Taiwan, Japan, and South Korea are not included in the ranking yet due to the language barrier in collecting responses, and Compass hopes to rank their startup scenes later this year. It will be interesting to see whether cities like Beijing and Seoul make the cut.

When it's not releasing reports, Compass provides benchmarking tool for startups. You can connect your data from Google Analytics, Shopify, and PayPal, then see how your startup is doing on things like traffic and revenue compared to your peers.