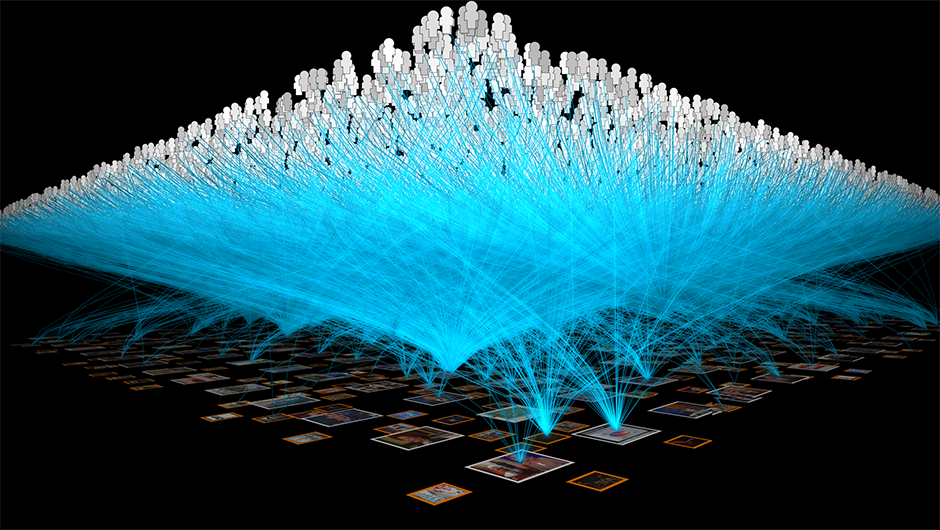 Knowledge is power. That is the old adage, anyway.

But does more knowledge really make us more powerful?

What do you do if you’ve got terabytes of data about your customers but no way to organize, understand, or make use of it?  Owing to the Internet and the ease of creating and storing data, we now have an astonishing amount of information. And it’s not going to stop.

Let’s put things in perspective. By the time you finish reading this sentence an hour of video will be uploaded to YouTube, five new Facebook profiles will have been created, and around 800 Tumblr posts will have been added. That’s what one second looks like on the web.

Even with the help of computers, algorithms, and machine learning programs, we’re often still paralyzed by this flood of information.

Why? Because the vast majority of it isn’t presented in a way that helps us not only understand it, but put it into action.

Fortunately, it seems we are on the cusp of a revolution when it comes to big data. Not only do we have more data than ever before, but machines now also have greater ability to learn from it and make predictions.

Supermarket chain Tesco has collected 70m refrigerator data points from its units, which are then analyzed. This allowed the company to gauge the performance, maintenance needs, and efficiency of the refrigerators and had a notable impact on energy costs.

In the end, Tesco has saved over $25 million.

Even more notable were the efforts by Morton’s The Steakhouse to please a customer who jokingly tweeted the restaurant to ask for his dinner to be sent to his flight.

The company realized he was a regular customer, pulled data on his usual orders, and then found out which flight he was on. They then sent a waiter in black tie to serve him dinner.

Yes, it may have been a publicity stunt, but it also showcases the power of data.

American Express in Australia also showcased the power of data when they created an algorithm that could predict loyalty through analysis of historical transactions.

This allowed the credit card company to forecast churn and identify accounts that will close within four months.

What about your data?

So, t0 help you make sense of all this big data, here are three tools every web-based business should be using.

We need to be able to see our data to make sense of it.

Spreadsheets filled with numbers or logs of entries don’t allow us to understand what we’re seeing. To us human beings they’re individual pieces of micro data and just too hard to make useful.

Yet, when brought together and compiled in an attractive and well laid out manner, they are the macro, the whole, and they give us an idea of exactly what we’re looking at.

In this way, data is quite similar to pictures made through dotting, known as pointillism. The artist creates an image using hundreds of thousands of precisely placed dots. Close up to the naked eye, each dot is just that, a dot. However, stepping back allows the individual to see and appreciate the beautiful picture as a whole.

Good data visualization does the same thing; it orders tiny dots into a pattern, aiding us to see the whole when we stand back.

We use and consume this sort of holistic data every day in the form of pie charts, line graphs, bar charts and infographics.

The next step is bringing all of our data together into one place.

Integration helps us make sense of data, analyze it, and move to action. So much time gets wasted sourcing and compiling different sources of data.

As a business you probably have data from half a dozen social media accounts, a variety of SEO analytics, email marketing accounts, as well as plenty more figures besides. Each of these shows different CTRs, keyword rankings, open rates and much more. Monitoring all this business data poses similar problems to that of worldwide style data analysis above.

Lack of integration not only costs money, it makes it impossible to see the bigger picture.

You may only have one business but the amount of data it creates is astonishing. Being able to collect, compile, and analyze all your data would save time, money, and effort. Being able to visualize actionable data can have beneficial impact.

Fortunately, we’ve reached a point where this sort of data analysis is now affordable for the average businesses. Tools such as Cyfe allow users to monitor everything from how individual departments to the company as a whole is performing, pull data from a variety of different analytics sources and even offer real-time reports.

The previous examples show the more data we have, the more we can predict and the better we perform. But it is not just your own data that can be useful.

Your competitors also can be fantastic teachers and being able to monitor their metrics, whether they are movements in rank on Google or new Twitter followers, can provide you with details of who is doing the right things and how.

Realistically, it’s not possible to manually monitor each competitor’s social media accounts to see if they got more followers. However, numerous tools now exist that can compile, analyze and visualize your competitor’s data and allow you to see it all in one place, providing you with the ultimate competitive advantage.

Knowing what to do with more—being able to see it, integrate it, and analyze it—is the real advantage. Bringing all of these factors together in a clear and complete manner allows us to create more dynamic, competitive, responsive, and profitable businesses.