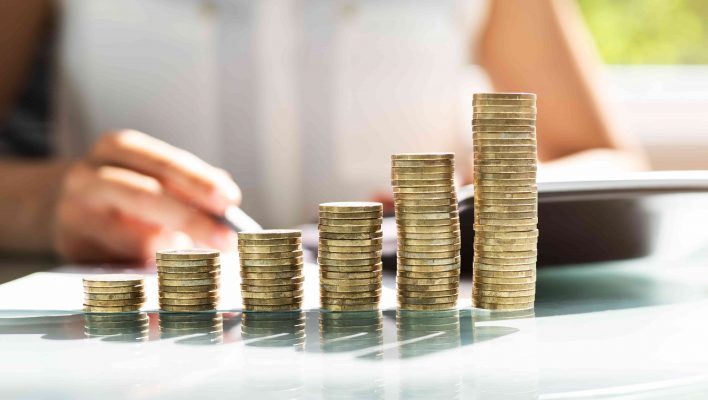 US Workers are set for their biggest bump in pay since 2008, according to a survey of US businesses conducted by American think tank The Conference Board.

The companies involved in the survey – half of which employed more than 10,000 people on their payroll – are setting aside bigger proportions of their budgets to provide wage rises.

After almost two years of lockdowns, the news will fall on welcome ears yet is unlikely to ease economic worries considering inflation rates are as high as they’ve been in almost four decades.

The conference board, a US non-profit business membership and research group that has thousands of public and private companies amongst its members, surveyed 240 businesses between November 8th and November 19th.

The survey revealed that companies are setting 3.9% of their payroll budgets to pay for raises (not total salaries) in 2022: 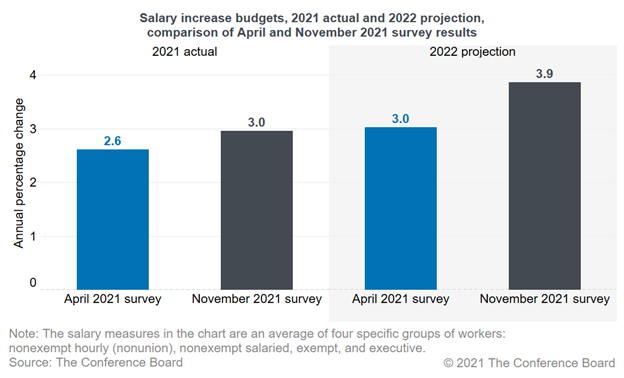 Since 1985, The Conference Board has been asking compensation about increases to salary budgets and salary structure movements in order to make predictions like this one.

The salary budget, as one may guess, is the proportion of a company’s finances that is put aside to pay wages. Salary structure movements, on the other hand, concern changes to pay grades and ranges and are connected to changes in the cost of living.

The Reason Behind the Raise

The Conference Board puts forward two overarching factors that could explain why the chunk of money companies are setting aside to pay wages is going to hit a 12-year high.

“Overall wage growth dramatically accelerated during the past 6-8 months. That increase is especially strong for workers under the age of 25 and for people who switched jobs in the past year. This suggests that much of the wage acceleration has been among workers who were recently hired” – The Conference Board

According to the think tank, new hires seeing their wages grow exponentially leads to ‘pay compression’ – in other words, wage premiums shrink for those with more experience. 46% of respondents said this increase in salary budgets was down to new hires.

Those more experienced staff then look for jobs elsewhere, which leads to higher turnover – and you get something like a ‘great resignation’.

The other factor identified by the Conference Board is inflation. The US consumer price index saw a huge increase of 7.8% (annual rate) between February and October of this year, which the Financial Times says is the highest since 1982 and would have played a role in salary allocation considerations.

On the face of it, yes. The fact this is being driven by new hires too is part of the wider economic picture that is leading to higher turnover across pretty much all sectors of the economy. Volatility of this nature is never good, and it also costs significant money to train new staff.

But more pressingly, The Conference Board suggests this could create a ‘wage-price spiral’ – where rising prices and rising wages simultaneously increase one another, which is usually considered economically unsustainable.

Besides, arguably workers won’t feel their wage rises in real terms due to the almost forty-year high inflation rates discussed earlier. A survey conducted by CNBC found that this inflation is now more of a concern to the American public than Covid-19.

A Tough Year Ahead

The Omnicron Covid is now responsible for around 3% of US Covid cases (a number that will only get bigger), so the country could see certain restrictions return come the new year.

Combine this with the fact that inflation is outstripping wages significantly, and US workers could be in for an incredibly tough year ahead.

Yes, mass pay raises are to be expected in 2022, but what difference it will make to the life of an average American worker is far from clear.