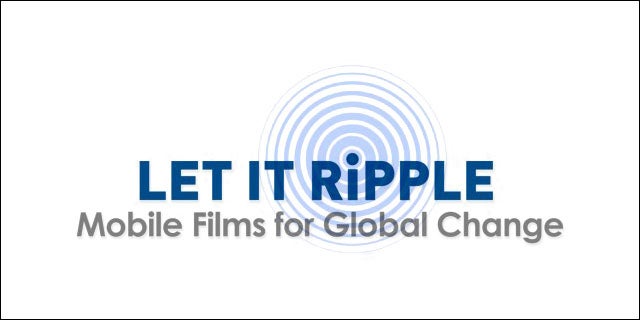 But sometimes, she’s not so fond of it: she and her family take “technology shabbats” once a week to unplug from the blinking alerts and scrolling text of their digital gadgets.

This love-hate relationship comes together in Shlain’s many film projects, most recently A Declaration of Interdependence. It’s the first in a series of films that use “cloud filmmaking”: reworking and remixing clips submitted by users (online), to inspire social change (in the real world). Translated into 65 languages, with clips from all over the globe, this 4-minute film features a rewritten Declaration of Independence. Nonprofits can use it for free, and Shlain’s Moxie Institute will add the nonprofit's logo and call to action at the end.

The second film is Brain Power, coming in September. It’s another 4-minute film, this time comparing the state of the Internet to the brain of a child: rapidly changing, very creative, and still developing. Shlain plans to make 20 such films in the next 4-5 years, with themes like engagement, power, money, happiness, and wisdom. Below, she explains why the Internet’s like a toddler – who needs our guidance – and why the crowd is so powerful.

Tech Cocktail: You say the Internet is like a child’s brain. Can you explain?

Tiffany Shlain: First, the film was actually just about this new research about how to best nurture a child’s brian, and we were working with all these neuroscientists and researchers from Harvard and the University of Washington, and a lot of the language that they were using was very similar to the language that I and my comrades who were interested in the Internet’s growth talk about.

Like, for example, how we make good connections and bad connections. I’m very interested in having everyone online who wants to be online connected. A lot of the researchers would say when a child’s brain is developing from 0-5, it’s critical that you get the most different parts of the brain connected in order for the child to have the most creative thought. And I really believe that the more different perspectives we get connected online, the better it’s going to be because they’ve proven throughout history that innovation most often happens when you have people from different perspectives coming together. So the Internet is creating this incredible infrastructure to make that happen, but right now we only have 2 billion people online.

So in the same way that the researchers want to have the child being stimulated in the right way with the right kind of connections in all these different parts of the brain, I feel like that’s very similar to the Internet. It was one of those big epiphanies. I’ve heard that the Internet’s in its adolescent years … but the more I was looking at it, and understanding brain research from 0-5, the toddler years – it became apparent that the Internet’s really in its toddler years.

Tech Cocktail: How do we nurture the development of the Internet?

Shlain: Be mindful of where you’re spending your time. With the brain, every interaction you have is either strengthening or weakening a connection, or making a connection. And it’s kind of like with the Internet, that everything you do, every link you click, every email you write, every site you visit, you’re creating a new web, a new connection point….

And then, a really important thing for me is that we get everyone access to the information online that wants to have that access.

Tech Cocktail: What do you enjoy most about working on these films?

Shlain: By making a film with hundreds of people from all over the world that I’ve never met – and we’re all interested in this subject and we’re making something collaboratively over the Internet – it’s very exciting. It’s like we’re all making something together, gathered around a common interest. And then with these films, they all deal with the essence of being human. All of the films will be about a universal ideal…. It’s just very powerful; it’s a very exciting way to make movies.

Tech Cocktail: What are some of the major lessons that you’ve learned through this process – business or otherwise?

Shlain: When you’re creating something – I think I did know this but it just got amplified – things always get better when you invite more people in. I definitely think the role of a director is important, but the more people we’ve invited to create something together – I feel like you feel it in the film.

I think the other thing is, inviting people to film themselves is very powerful. There’s something about someone [else] filming them, which is this one element that adds this layer maybe they’re not comfortable with … but having them actually film themselves with their cell phone is so intimate and raw and authentic.