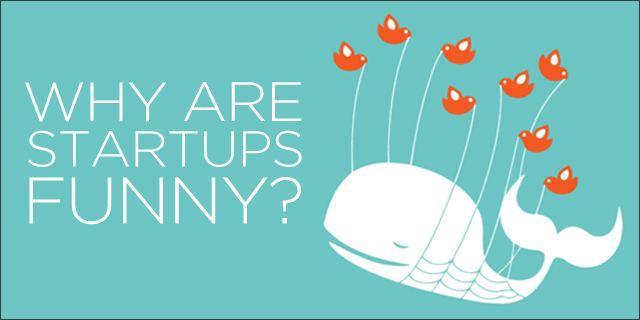 When Twitter crashes, you used to get the “fail whale”: a bunch of orange birds hopelessly trying to lift a placid-looking whale. When Internet Explorer crashes, you get a gray popup window and an indecipherable error report. While big companies try to impress us with their seriousness, why are startups so eager to crack a joke?

Lots of startup humor takes place beyond the eyes of the customers, from lolcats in the office chatroom to paintball fights. It can help employees bond, kind of like an inside joke.

“Humor is a time-tested component of effective group dynamics,” says investor Steve Fredrick of Grotech Ventures, a venture-capital firm that has invested in companies like Advertising.com (acquired by AOL) and LivingSocial. “[It’s an] important component to building a great team, so how could I possibly object?”

When I asked LivingSocial about their humor, they tweeted back: “Did you check out the picture of our ball pit? We love having fun!” In fact, the URL http://livingsoci.al/Play_in_the_ball_pit directs to LivingSocial’s job board.

Another way to entice employees is with job titles like “ninja” and “guru.” A popular form of startup humor, wacky job titles can be a perk for employees when high pay and benefits are decidedly lacking.

Says one 30-year-old Israeli entrepreneur: “Making [your employees] feel good for a low cost is very important, because you are competing with all the established businesses that can hire them.”

While many laughs take place at the office, startups often incorporate humor into their public image, too. Humor makes a company seem genuine and fun, as long as it’s not trying too hard.

“[Humor] conveys you are authentic and confident,” says former Tumblr intern Josh Rachford. Tumblr itself is conducive to funny posts and has sparked the creation of a Facebook group (5,185 fans and counting) called “I love the humor I’ve picked up on tumblr, that no one else understands.”

Perhaps we like funny startups in the same way we like funny people; we’re drawn by their ease and charisma. A 2009 study showed that women rated funny men more intelligent, honest, and attractive.

Google is one of the most prolific producers of humor on the web. If you key in “up, up, down, down, left, right, left, right, B, A” in Google Reader, a ninja will appear in your RSS feed – a joke for savvy Nintendo gamers. Searching for “recursion” on Google brings up the prompt “Did you mean recursion?” which will make geeks LOL. Maybe Google is trying to remind – or persuade? – us that they haven’t become a big, boring company. (After Larry Page took over as CEO last year, there were reports of him trying to slash bureaucracy, and speculations that Google had already succumbed to the red-tape demon.)

If humor boosts a company’s image, one might ask, why don’t big companies use it? Because of that same bureaucracy: it’s usually hard to get a committee to agree on what’s funny, and employees fear backlash from faceless higher-ups if they joke without permission.

Humor can also help lighten the mood when long hours and lagging profits start to wear on startup employees.

“Humor can temper the very real threat of complete failure for a startup in its early days,” says Don Rainey of Grotech. “We think it is a healthy coping mechanism for the ups and downs that are emblematic of the startup life.”

Fredrick agrees: “It can be used to defuse tension and to focus a team in what are fundamentally risky endeavors.”

While jokes normally mean goofing off and not focusing, Fredrick has a point. Worry is distracting, and a little humor brings back the positive: everyone can laugh, shrug off their doubts, and remember why they’re doing this in the first place.

While humor helps counterbalance the enormous risk of working at a startup, humor itself is also risky. Just as startups are constantly assessing their competitors and customer interest, humor requires us to “actively judge the situation,” says researcher Kristofor McCarty. In both cases, there is risk: you may pick the wrong target demographic or offend your prim interlocutor with a non-PC joke.

Groupon learned this lesson all too well. It was called “offensive” and “racist” for its 2011 Super Bowl ad, which started as an apparent plea for Tibet’s plight and turned into advertising for the company’s daily deals.

Risk also explains why T-Mobile, a 22-year-old company with over 35,000 employees, ventured to release a funny royal wedding video last April. Since the video it was parodying had already gone viral, the joke had little chance of falling flat.

In lots of ways, startups use humor because they aren’t – and don’t want to be – big companies. Startup humor is a shoutout to a community of people who are passionate, innovative, and quirky – and who could use a little fun in their stressful lives.

The Twitter fail whale encapsulates the infectious optimism of the startup founder, who can make a joke when his software borks. And it illustrates a truth for startup employees and their customers: even if the company fails, it still made us smile.