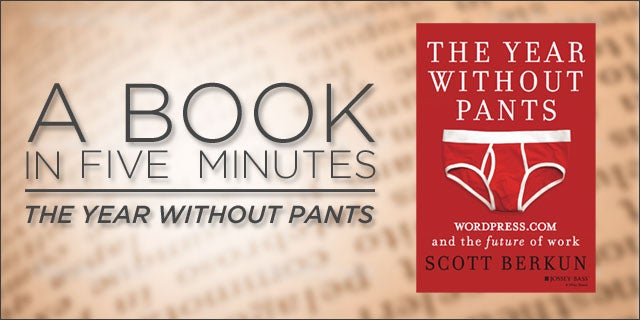 Don’t have time to read? Here’s a quick but comprehensive summary of Scott Berkun’s “The Year without Pants: WordPress.com and the Future of Work,” released on September 17, 2013.

Who should read this: People who are interested in forward-thinking company culture, particularly a culture that gives employees freedom and independence but remains productive. That might include founders or executives trying to create such a culture, or managers trying to implement it.

Elevator pitch: Berkun, a business writer with expertise in management, decided to put his theories to the test by working at Automattic (the company behind WordPress) for almost two years. Automattic is known for not using email, having an open vacation policy, and working remotely. In this book, Berkun uncovers the secrets of Automattic’s freewheeling culture, while teaching Automattic (and the reader) how to optimize team dynamics, leadership, and vision in such an environment.

WordPress started in 2002, when Matt Mullenweg couldn’t find a publishing platform to use. He had been using Cafelog, but the founder seemed to have disappeared and other products were closed and restrictive. Cafelog was on an open GPL license, so Mullenweg took the code and started WordPress with developer Mike Little and Michel Valdrighi, the resurfaced founder of Cafelog. Automattic officially launched in 2005 and soon hired former Yahoo! executive Toni Schneider as CEO.

WordPress is incredibly successful: as of now, it powers almost 20 percent of websites on the Internet. At the same time, Automattic's culture is progressive, with few rules or policies for around 170 employees.

The company had no hierarchy until 50 employees, when founder Matt Mullenweg decided to create teams of five people, each with a team lead. Berkun was hired as the lead for Team Social, tasked with making blogging and reading easier.

People who want to work at Automattic, the firm behind WordPress, don’t go through interviews. Instead, they do a trial in the form of a simple project.

After they’re hired, their orientation starts with customer support training. (The customer support team are called “Happiness Engineers.”) For a month, they spend most of their time answering “tickets” or support requests from bloggers. Although frustrating for some, it’s real work that helps you understand the product, build relationships with coworkers, and help actual customers.

The Automattic office is in San Francisco, but hardly anyone ever works from there. WordPress employees work remotely; some who work together haven’t even met. So they learn to be great online communicators and infuse personality into their Skype chats and IRC posts.

The team meets once per year in person at an annual retreat. The retreat isn’t like your regular corporate retreat, with schedules, speeches, and name tags. Instead, teams pick a project to complete during the week and work on it.

One of the problems with remote work is that you lose a lot of “passive data” that comes from sharing an office: for example, people’s body language, habits, and mood, or knowing when is the best time to interrupt them.

Communication at WordPress roughly breaks down like this: internal blogs, where teams record meeting notes, have discussions, and chat (75%), IRC (14%), Skype (5%), and email (1%). Meetings are conducted via IRC and open: anyone can watch or read them later.

Mullenweg holds a monthly town hall via IRC (with a webcam video feed) to share updates and take questions.

In general, teams can ship features whenever they like. To start, they identify a problem and write a launch announcement, a litmus test to make sure the problem is big enough. After launching, they use pre-identified metrics to measure success, and start the process all over. This makes it easy to launch and innovate quickly.

In person, Mullenweg is known for trying to make everyone comfortable, being a good host, and being patient. He loves to laugh, but is still an introvert. During the year – 200 days of which he spends traveling outside of San Francisco – his online persona comes across as more cold and terse.

WordPress.com makes money from upgrades, advertising, VIP clients, and partnerships. But there isn’t an obsession with making money; you can see that if you try to find the small Store button on your WordPress blog. Employees also don’t obsess over compensation and raises; many are used to programming for free and have never worked in a big corporation before.

WordPress’s cultural values include the following:

WordPress culture is influenced by data, but not fully data-driven. Employees aren’t tracked according to metrics or KPIs because that could skew behavior. But much data is tracked on how people use WordPress (e.g., how often they publish, what themes they use), and it’s used to inform decisions.

WordPress also puts a lot of trust in its employees. Features and bug fixes are released every day – there are no schedules or formal safeguards. Instead, employees are responsible for testing the features and sticking around after deployment to see what happens.

A major problem at WordPress is the fact that employees tend to tackle incremental projects rather than big-vision goals. For example, during Berkun's tenure, no one was working on the issue of usability and user experience. That’s likely due to a combination of factors: risk aversion, the independent personalities of the employees, the communication tools they use, and the culture cultivated by Mullenweg and Schneider. Employees don't usually go after big projects, and even bug fixes weren’t ordered according to priority.

Also, there is a lack of transparency about compensation and the hiring process. And it's difficult to get feedback at Automattic; it requires you to actively reach out to employees online, or find a time to chat about it.

When Berkun arrived, employees worked on whatever projects they got the most value out of. Berkun wanted to give more of a vision to all the features and bug fixes his team was releasing. In thinking about the user experience, he realized that the big problems for bloggers are 1) actually publishing a post (50 percent of blogs have zero posts), and 2) getting readers to that post. Those became the criteria for his team’s feature releases.

Team Social decided to take on two huge projects: Highlander (which would unify the comments feature across WordPress blogs) and Jetpack, a project that would allow WordPress blogs hosted off WordPress.com to have the same features.

When Berkun arrived, Automattic was a company with little “friction”: no schedules, no pressure from competition, little marketing, and minimal hierarchy. He wanted to introduce some friction, which can be conducive to innovation and creativity.

Team Social decided to launch Jetpack for SXSW 2011. And there was definitely friction – Automattic wasn’t used to working on deadlines, making time estimates, or managing release schedules. They also had to hire more people and put more focus on UI. But they managed to launch in time, and Jetpack has since been downloaded 5 million times. The team also launched Highlander.

The Future of Work

Results. Many of our corporate habits – like working 9-5 or in the same office – are based on tradition. Instead, companies of the future will evaluate habits and best practices by the criteria of producing the best results.

The primacy of creators. Support roles, from legal to IT to even management, shouldn’t infringe on the work of creators. Managers, in particular, should “set good priorities, remove distractions, and stay out of the way.”

Self-sufficient, passionate people. These are people with deep domain knowledge but enough broad know-how to get things done on their own.

Remote work. Remote work should at least be considered as a possibility. Companies are worried about losing productivity, so the solution should be to try it out, possibly on an employee-by-employee basis. The arrangement works particularly well for self-discplined people.

Email. Email overload isn’t inescapable. Part of the problem is culture: the habits of your coworkers and yourself in terms of sending and replying to emails. There are many tools that can replace email and, in some cases, work even better (when real-time, voice, or in-person communications are needed).

Meaning. The most important lesson from Automattic is that work doesn’t have to be serious and meaningless. We can find passion and meaning in our work, as well as humor and joy.

Berkun is an amazing storyteller, and one of the biggest draws of The Year without Pants is the fact that you’ll actually enjoy reading it. You learn the personalities of the main characters, and you root for them as they try to navigate the story’s conflicts – figuring out team dynamics, solving technical problems, and launching features on time.

Startups talk a lot about giving their employees autonomy and freedom, but what does that mean in practice? A dry theoretical book about “the future of work” would have taught us less than this engaging narrative. Berkun’s high-level insights about remote work, hiring passionate people, and focusing on results may seem basic, but they take on a new level of nuance after you read about all the Skype conversations, team jokes, and real hard work that led to those insights. This book can be an inspiration for your startup culture, or just a fun read.