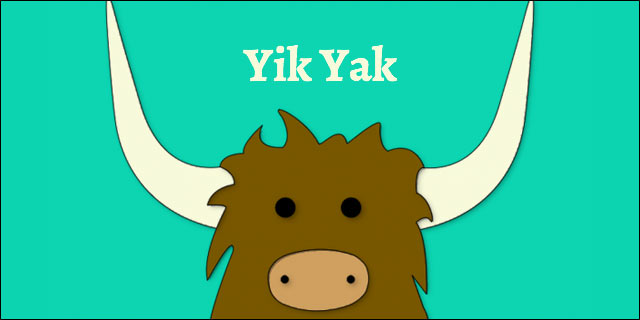 Brooks Buffington and Tyler Droll started Yik Yak on a whim, but quickly a “side project” turned into an app that college students can't get enough of. Buffington and Droll, both Atlanta natives and 23-year-old young entrepreneurs, launched the app at Furman University, a small college of about 3,000 students. Through sending hundreds of emails to every organization on campus, the cofounders quickly increased their downloads from fewer than 100 to more than 1500 in one day.

According to their site, Yik Yak is an anonymous app that “acts like a local bulletin board for your area by showing the most recent posts from other users around you.” It also allows users to share news, funny jokes, experiences and other events happening on their campus.

For Buffington (who put a financial consulting job on hold) and Droll (who dropped out of medical school the week before classes were to start), the idea for Yik Yak was based on parody Twitter accounts. According to Droll, most college campuses have 5-10 parody accounts that thousands of students follow; these accounts also use pseudonyms and you don't usually know who is behind them. However, it's a challenge to make and maintain parody accounts, but Buffington and Droll said they wanted to give all students this power, which is where Yik Yak comes in.

Additionally, the potential for the Yik Yak app was confirmed when there was a spike in downloads at neighboring colleges and universities in the region such as Georgia Tech University and the University of Alabama.

“Things were just spreading by word of mouth,” said Buffington. “You know Spring Break was huge for us – everyone went down to Florida and that’s how we spread to every school in Texas… from there we spread to Wisconsin, to Cornell to Boston College, so we are pretty much at every single college in every single state besides a few of the West Coast states.”

How Does Yik Yak Work?

Described as a “virtual bulletin board,” Yik Yak's infrastructure mirrors similar social sites such as Reddit and Twitter. Here's what first-time users should know:

When creating Yik Yak, simplicity and making the app user-friendly were also key.

“I think with our first app, we tried to make it too perfect to begin with, and it ended up being too complicated and we wanted to strip away as much as we could from Yik Yak and make it super simple,” said Buffington.

While Yik Yak has taken off on college campuses, many anonymous apps have received bad press in the past. In one of my previous articles, I wrote about the potential impact of anonymous apps and why they might not be the answer if things turn negative. However, Yik Yak has taken steps to curb negative comments, promote a positive culture, and create tight-knit communities on campuses. Here's how:

The Future of Yik Yak

As of now, the Yik Yak cofounders have secured about $1.5 million dollars in funding from Vaizra Investments, DCM, Azure Capital Partners and several other angels. Buffington and Droll said they are focused mainly on user growth. They ultimately want to expand to every university in America, and later internationally. While the app is currently based on parody accounts, both said Yik Yak has the potential to become a real-time news source — and they're hoping to use their “peak feature” to make this milestone happen.

“You can look into places so the idea would be that we let you peak into a Yik Yak feed at a big sports game or in Ukraine or in a big city during a big event or natural disasters,” said Droll. “So we can kind of start adding some more legitimate aspects to the app by making it a real-time news source.”