Streaming services have become king of the entertainment landscape. From Netflix and Hulu to HBO Go and Amazon Video, households around the country have brought these services into their living rooms, bedrooms, and occasionally bathrooms as if they were their own children. But which ones are the most popular?

With more households paying for streaming services than cable at this point in the game, this is no menial question. The king of the streaming services will have the upper hand in the cord cutting revolution that is already in full swing. And according to data from Parks Associates, primarily based on number of subscribers, we can now definitively say that Netflix is the most popular streaming services in the US. Now, feel free to join me in a collective:

While everyone in the world knows that Netflix is at the top of the streaming service mountain, the top 10 does provide some insights into the future of the increasinly popular medium. 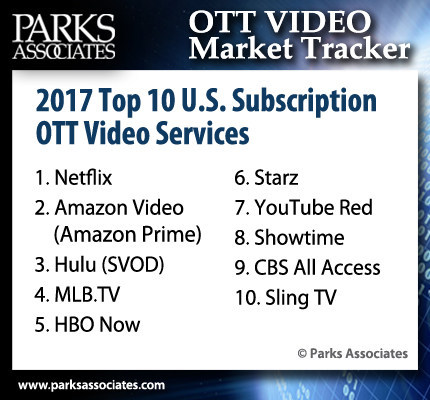 Yes, the top 3 is a bit of a given, with Hulu and Amazon Video firmly cemented as the alternative to Netflix. However, MLB.TV strikingly made it in the top 5, proving the undeniable power of World Series Games 7s. Additionally, premium cable streaming services have shown substantial growth, with HBO Go, Starz, and Showtime all notably breaking into the top 10.

“While the top three are no surprise, the big story over the past year has been the rapid subscriber growth for OTT video services from HBO, Showtime, and Starz. The combination of recognized brands and popular original content is driving demand for their offerings,” said Brett Sappington, Senior Director of Research, Parks Associates. “Services such as Sling TV and Crunchyroll are still enjoying strong growth, but other services have simply grown at a faster rate over the past year.”

So what does this mean for the future of streaming services? It means that the more, the merrier! While Netflix was able to establish itself before any competition had arisen, streaming services have begun popping up every for every reason, with companies like Disney even working towards their own. Now, with dozens of choices across the medium, it's important to make an impact before the spaces becomes too saturated.

“Consumers have a variety of choices and are increasingly self-aggregating multiple OTT video services. As a result, partnerships within the OTT space are becoming more common, as operators, content owners, and OTT service providers all look to gain an edge in attracting subscribers and generating buzz for their offerings.”