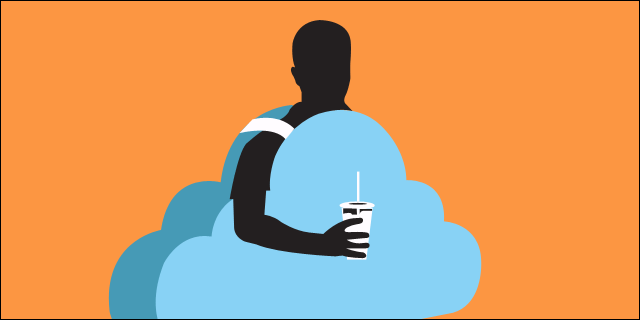 Tonight is your night; rule the world. (This has got to be one of the best GIFs I've ever found on the Internet. Much amaze, so lasermeowfic).

Happy Halloween! Do you have a costume, yet? Because I don't. Last night, I considered going into a pop-up Halloween costume store near Union Square in downtown Manhattan, and decided against it after realizing that I would have had to wait 30 minutes in the line outside. Honestly, it seemed almost as bad as the line on iPhone launch days – almost. But that got me to think: what the hell am I doing? I could totally make my own Halloween costume without ever having to step foot in those little shops of horror AND avoid paying more than $40. As a follow-up to yesterday's piece on a last-minute DIY iPhone 6 costume, we found 13 (because, duh, Halloween) different tech Halloween costumes that you can fully execute on your own at home, without having to step inside a Halloween store today.

The 13 tech Halloween costumes featured in this article mainly serve to inspire you – in no way do you have to execute according to each of the pics. Alongside each costume idea is a recommended plan for execution – again, you don't have to follow it, but definitely consider them. For many of these tech Halloween costumes, you should already have some items or craft items laying around, but if you don't you can simply swing by a craft store, home improvement store, or even your local CVS/Walgreens/Duane Reade/etc. Also: thrift stores and used goods stores are safe bets, clothing-wise. Your goal for today is to make a costume by tonight, without having to waste time in a Halloween store or having to drop a lot of cash.

Here are 13 tech Halloween costumes to consider making for tonight: 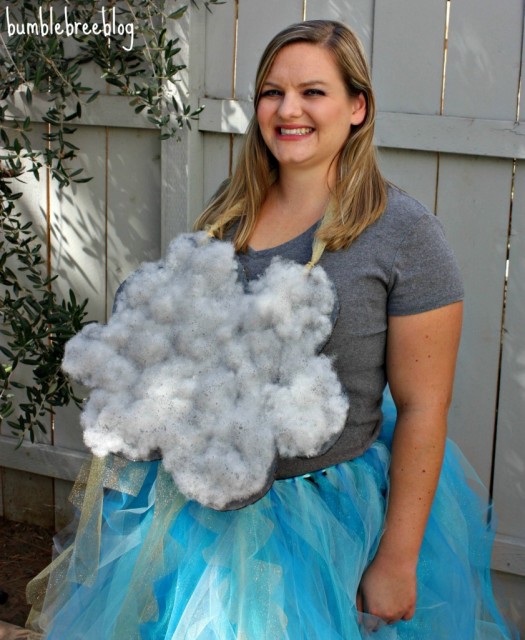 This woman is dressed as a storm cloud, but whatever – you get where I'm going. (Via BumbleBreeBlog)

Buy a bag of stuffing from a craft store (or you buy a dirt-cheap pillow or stuffed animal and gut it for its stuffing). Then, hot-glue the stuffing to an old white t-shirt (hot glue dries quickly and will allow the stuffing to stay on throughout the night). Maybe print out the logos of various Cloud services – like Dropbox or iCloud – and glue them on. 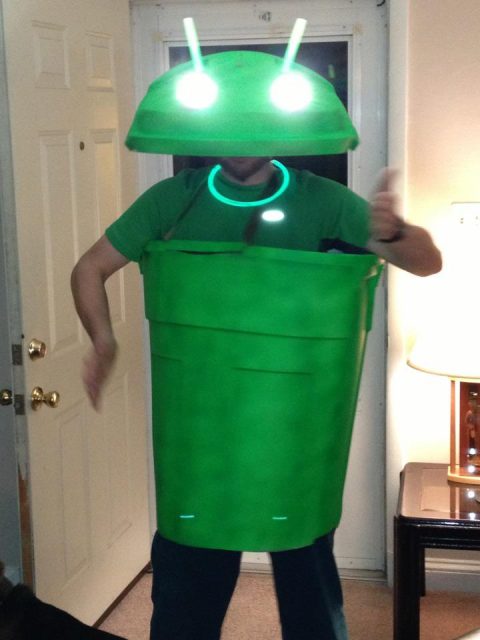 This guy went pretty hard with the flashlight eyes. (Via Mymondanite)

I wouldn't recommend getting a large trash bin like in the picture, unless you have something that can cut a hole through the bottom. For the body: buy a paper poster board and staple the ends together to form a cylinder, then spray-paint it green. For straps, I would just use two random pieces of fabric (maybe cutting two long strips from an old dish rag or something) and stapling those onto the cylinder. For the head: find an old mixing bowl no longer in use and spray-paint that green. Hot-glue an old cap on the inside of the bowl, so there's a way for you to keep the bowl on your head throughout the night. Hot-glue white paper circles onto the bowl for the eyes. And for the antennae, hot-glue anything resembling them that's painted in the same green (maybe cut off a portion of the paper poster board before you create the body, and save that for the antennae).

Can't tell if she's homeless or just really desperate for followers. (Via 3.BP.Blogspot)

The girl above is doing too much. Find a spare whiteboard, and figure out its precise measurements. Screenshot an image of Twitter's tweet box, and resize in Photoshop accordingly per your specific whiteboard. Print out the image and cut out the portion of the tweet box designated for text. Tape the full image onto the whiteboard (there should a portion of the whiteboard accessible for writing updates/tweets). Then, just find a way to get the whiteboard to hang from your neck all night. 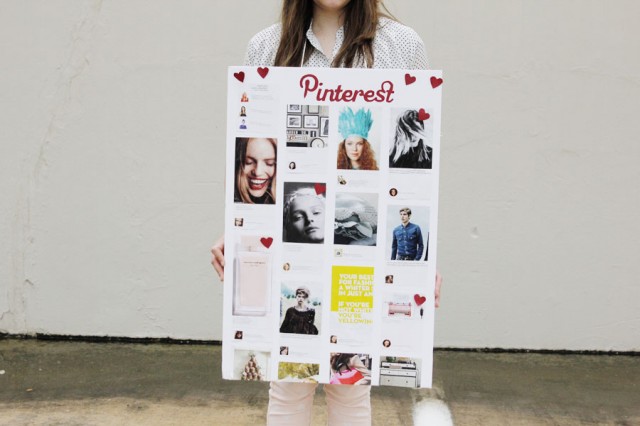 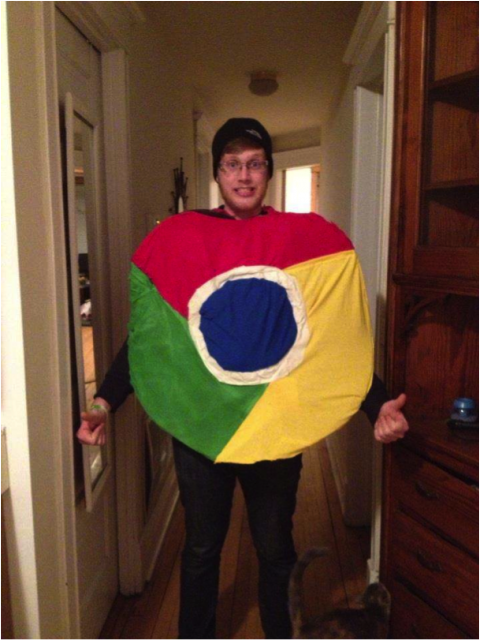 Chrome's logo will always remind me of a Poke ball. (Via Bearcat.KNationU)

Buy two large paper poster boards in white. Cut two large circles of equal size. Trace the Chrome symbol on both circles. Use acrylic paint (cheap and fast-drying) in yellow, red, blue, and green to color in the corresponding sections, leaving the white circle border unpainted. Then for straps, follow my recommendation for the Google Android costume. 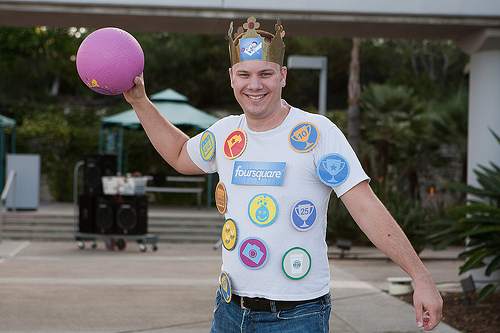 Foursquare is irrelevant. Dress up as Swarm. (Via Flickr)

Don't. Dress up as Swarm, instead. Grab an orange shirt and spray-paint two or three horizontal lines in white (or alternatively, spray-paint a white shirt with orange spray-paint, making sure to leave two or three unpainted lines). Buy white poster board and cut out two wing shapes, then hot-glue them onto the back of the shirt. Print out (or draw) an image of the Swarm check-in button and glue that onto the front of the shirt. 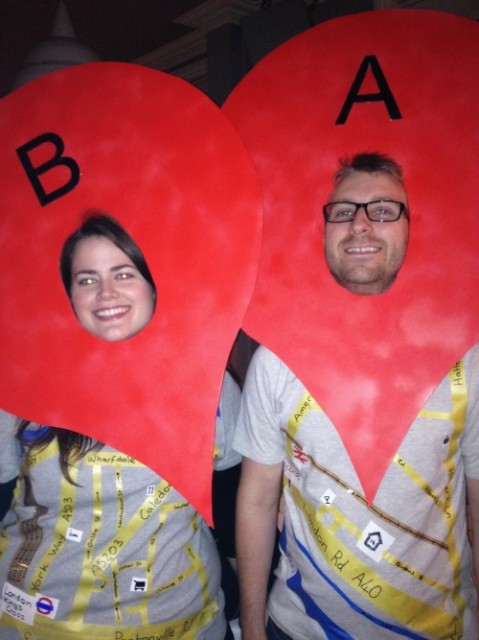 What even is “love”? (Via HowToPlayHouse)

Two heads are better than one – figure it out between the two of you (shouldn't be too difficult). 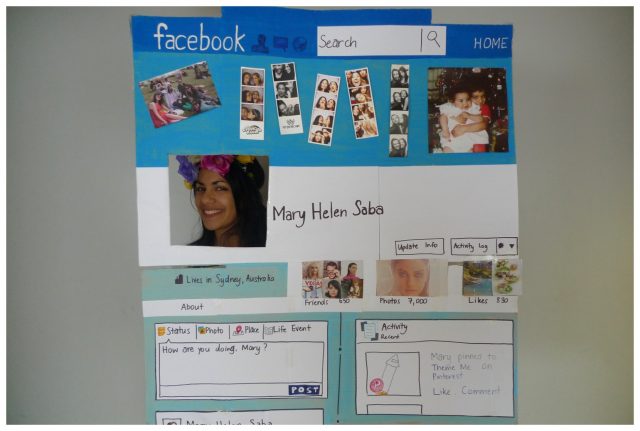 Mary Helen's friend: “Mary Helen- what even are you?” | Mary Helen: “Oh, I wasn't allowed to bring my giant costume into the bar. Also, my arms were getting tired.” (Via TheMemeDotCom)

Please do what Mary Helen has done. Maybe use a tri-fold foam poster board (with the spines taped down so it stays flat)? Then some paint, markers, and printed pictures of stuff from your own Facebook profile…? I dare you to make this and try to go into a bar. 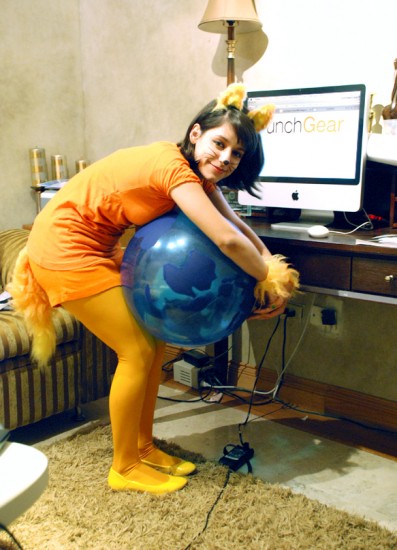 This Firefox has terrible posture. (Via UnReality Mag)

Buy pants and a shirt from the thrift shop, and spray-paint them orange. Maybe find an orange rag/towel while you're at it, or spray-paint something orange. Hot-glue the tail onto the butt-side of your pants. Find a blue ball and trace a map of the world onto it with a permanent marker. You should also consider carefully hot-gluing the ball to some kind of necklace/strap so that you don't have to carry a ball around the entire night. 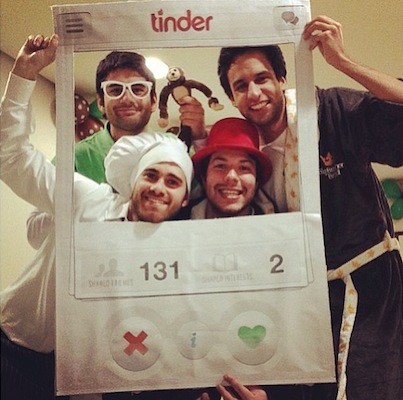 The worst kind of Tinder user – WHICH ONE ARE YOU? (Via SheFinds)

Another one that's pretty straight-forward. Instead of printing out the logo, buttons, et al., you can also just draw/paint them yourself directly onto the board. 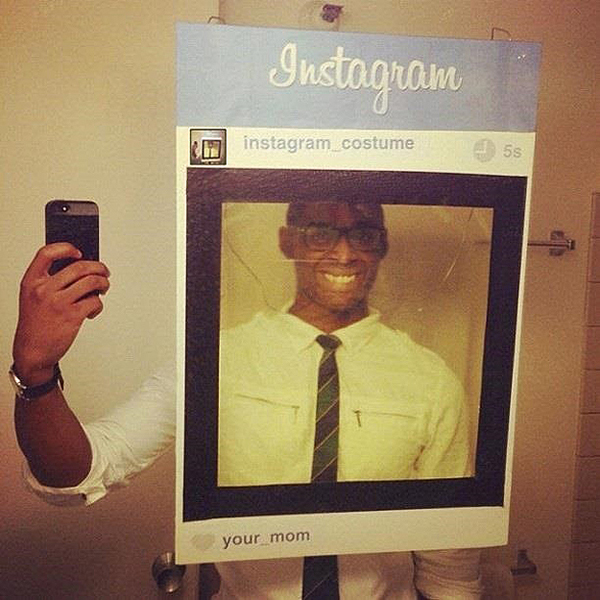 Super impressive – down to the avatar on his costume. (Via BitRebels)

For the most part, I think the person above dida good job with execution, and seems fairly easy and cheap to replicate. Purchase a paper or foam poster board and cut out a square large enough to fit your profile. For the Instagram filter, use either a colored acetate sheet or plastic wrap, which you can simply tape down. Print out the the Instagram logo and all the necessary minor details (such as user name). Hang this around your neck, instead, and hold it up when showing people your costume's full effect – executing the costume in above's method would likely result in blocking access to full vision/to your beer (i.e. that's dangerous). 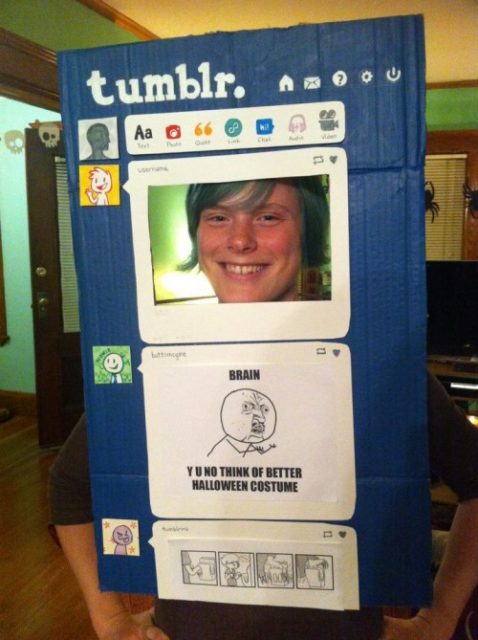 Again, really just follow the example above. Use a foam poster board, and print out popular memes or screenshots of your favorite GIFs. Personally, I'd include some fake inspirational quotes. 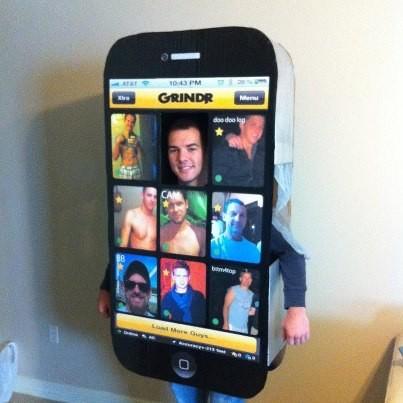 This is actually scary. I can't even…just…no.

Let us know if you end up following some of our tips and recreate one of these tech Halloween costumes – we'd love to see them! In the meantime, have fun tonight! Here's a video to put you in the Halloween spirit: