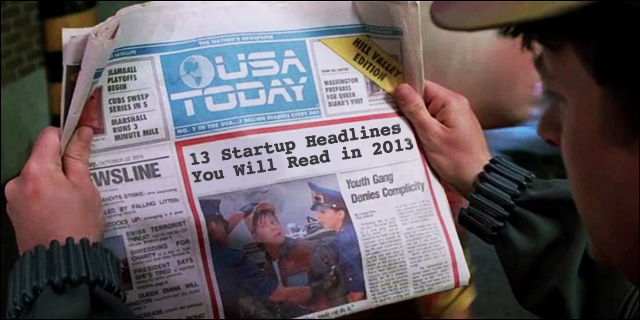 The lines between entrepreneurialism and wizardry are blurry, for future gazing is a superhuman competitive advantage possessed by both.  Mastering the current business landscape is a skill in it of itself, but predicting where its headed may very well be the difference between merely surviving and thriving.

To better prepare you and your startup for what's to come in the year ahead, we've asked a baker's dozen business mavens to share what lies inside their crystal balls for 2013.

“Crowdfunding Closes for Lack of Money”

Sure, you come from large family but does the $350 bucks you raised for your start-up during your Mom's Thanksgiving dinner really count as crowdfunding? Even that homeless man on Market Street knows he's not going to get rich looking for handouts from the thousands of strangers that march by his corner daily. When it comes to raising capital, the wisdom of crowds is a myth. If you have a smart startup idea, look for smart money. There's a lot of it out there — but it's not hiding in the crowd.

The convergence of one, two or all seems logical as there's a growing collusion among these leading social networks (I.e. Facebook/Instagram). How do you empower a tweet? A pin? A playlist? You let a tweet sing and a pin tweet…

Facebook is reactive, all the above are growing because they are proactive and allow users to engage in real time more effectively. And together they would become powerful ways for the aging Facebook generation to stay connected.

On the other hand, look out for iTunes in 2013. They may take Spotify and flip it on it's head…

Big data move over, this year three unexpected trends are shaking up the status quo in Silicon Valley. Women rule the tech scene. Thanks to 3D printers, investors are no longer afraid of hardware startups… And Virgin Galatic has competition from a 14-year old in Kansas.

One of the most interesting growth area in 2013 will be consumer health. Obamacare is here to stay and for the first time ever doctors are embracing new technology in form of iPads and smartphones. In 2011 and 2012 we saw the first wave of healthcare startups, but in 2013 there will be an explosion of new startups that try to capitalize on increased consumer interest towards health apps.

It seem clear that Marissa Maier intends to turn-around Yahoo! in part by acquiring innovative startups.  I speculate that in 2013 we will see this headline many times over as Yahoo! leverages their bankroll to turn the company around.

Startup founders rally around universal dress code of black frame glasses, flannel shirts and will frequently use the word, “pivot”.

“Lonesome launches its app so you can hang out with yourself”

Facebook is everywhere. Path is elitist. Pair keeps you faithful. Lonesome is the next big thing. Hang out, photograph and flirt with yourself. Because life is too complicated when you add other people.

With the onslaught of new AppStore guidelines and restrictions, mobile developers have been seeing their iOS apps limited or completely rejected by Apple, adding to their monetary woes. In a joint effort with Microsoft, hacker group Anonymous, and the State of Texas, mobile developers from around the world have created their own app store with virtually no restrictions, housing apps designed for all device platforms. Sources say that there is no official name for the store yet, but an image of a man with glasses, riding a horse, and waving the middle finger has been submitted as a first draft for its logo.

The SEC is already behind on one of the deadlines for the JOBS Act, and it will likely miss the December 31 cutoff for issuing crowdfunding regulations. Some industry players estimate that equity-based crowdfunding for nonaccredited investors (i.e., you and me funding startups) won’t go into effect until fall.

With the economy beginning to turn the corner, Chicago's technology corridor is leading the way. Having secured funding in 2012, and growing quickly in 2013, companies at 1871, Catapult, and Lightbank are starting to come into their own and ramp up their staffs, exacerbating shortages in technology talent in the area. Salaries for engineers who specialize in Python or Ruby continue to climb, as does demand UI/UX experts and even top tech-sales talent.

Thousands of websites go offline. Despite yearly devastating outages on the EC2 cloud many companies refuse to deploy a good DR strategy and it will take several more outages before companies recognize the value in doing so.

While hardware startups have typically been the ‘black sheep' of the venture capital world — this trend has seen a strong reversal in 2012. One of the most game changing technologies to emerge from the hardware startup community is 3D printing. A number of new companies are driving down the barrier to entry for anyone to print their own ‘things.' All that is missing now is a killer app. Last minute Christmas shopping? Might be tempting to just download that barbie.