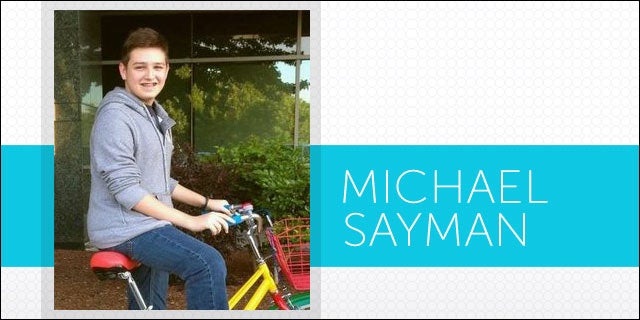 A Miami teen developer has been making headlines this week after Mark Zuckerberg personally chose him to be featured at the f8 developer conference. Michael Sayman is a 17-year-old living in Kendall, who started making tens of thousands of dollars to support his family on the first app he ever built after teaching himself to code using online tutorials he found via Google.

As was originally reported in Pando Daily, Facebook recruited Sayman for an upcoming summer internship. He currently has an app called 4Snap, where players are given a word and their friends can guess the term.

Tech Cocktail reached out to Sayman and asked him a few questions about his experience:

Tech Cocktail: When and why did you start coding?

Michael Sayman: I starting to learn to code when I was about 12 years of age. Mainly I wanted to code so that I could get my blog, that I loved, more popular. I wanted to make it self-hosted, and that meant I needed to know how to do HTML and CSS and other web languages. After that, I decided to jump into Objective-C with iOS for the App Store. I wanted to do that because after watching Steve Jobs announcing the App Store and saying that it was “super easy to make apps,” I fully took his word for it and wanted to make one myself! So after about a year of learning how to do it, I was able to publish my first app in the App Store. And ever since then, I have been learning more and more to try and do even better!

TC: When you decided to build your first app at age 13, did you think it would be as difficult as it was?

Sayman: Not at all! Actually, when I first started, I thought it would take me at most like a month or two to learn how to program. It actually turned out to be a never-ending task of learning. Which is great because I find it fun to learn about coding!

TC: 4 Snaps is doing great on the App Store, congrats! Does that give you bragging rights amongst your friends?

Sayman: Absolutely not! I try to hide it as much as possible with them. Try to avoid talking about it and everything. It comes up when people are playing and it’s really fun! But I try to stay the same as I’ve always been. What I did isn’t anything special; I was just really determined to making what I love a reality!

TC: What was it like to meet Mark Zuckerberg?

Sayman: It was really cool to meet him, actually! He is so nice and down to earth. It’s crazy to think that he even knew my name! I was so excited to see him I think I forgot most about what we even talked about [laughs]. But honestly, having the chance to meet with one of the most influential people in the world is an incredible experience.

TC: After your Facebook internship this summer, what are your plans?

Sayman: To be completely honest, you never know what could happen. And from the pace at which things have been changing so quickly, it’s crazy to see things so far into the future. So, definitely excited to see what is to come of all this, but not really sure what exactly that will be.

TC: Besides your own app, what are some of your favorite apps?

Sayman: One of my favorite apps in the App Store is “Threes!” It really is one of those games that I just cannot let go of. What amazes me the most about it is that it is so simple, but they manage to keep the gameplay fun and exciting throughout the whole experience — definitely a must have in my opinion!

TC: Do you have any advice to young developers like you?

Sayman: To all those kids out there who think it might be impossible to get to where you want to, ignore everyone who tells you that. Keep chasing what you love and keep working at it and never stop. If you really want something, it can happen. When it comes to technology, it really doesn’t matter where you come from, how much money you have, or even how old you are. Anything is possible in the world of apps.