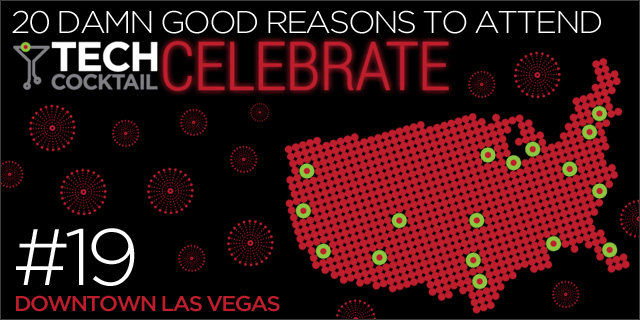 When I say Las Vegas, what comes to mind?  Blackjack, booze, bad decisions, perhaps other other subjects not appropriate for young ears (or eyes)?  Now let's prefix that with Downtown; does your mind change?  It should.

For those who have yet to visit Downtown Las Vegas since Tony Hsieh and his Downtown Project have injected $350M and a whole lot of ambition + optimism, you are missing out- for many reasons.

Maybe it's the startup culture that entices you, with its community-centric, city-as-an-incubator, Vegas Tech Fund, the thriving co-working scene (all separate links), the vibrant, weekly tech meetup, the ever-expanding startup spotlight, or some combination of the aforementioned.  Perhaps it's the tight-knit, neighborhood-like, “the whole is greater than the sum of it's parts” community.  Maybe it's because you want to bump elbows with the celebrities, tech visionaries, and business heavy hitters who come through for Tech Cocktail Week and conferences of the like.  Maybe it's the rapidly growing culinary and art scene.  Maybe it's for the giant flame spraying Mantis.

Whatever your reason, Downtown Las Vegas has something for everyone- offering a very different menu than it's much more sinful neighbor to the south.

I caught up with Kim Schaefer, Head of Communications at The Downtown Project, and Downtown Vegas veteran, to help paint a clearer picture of what you can look forward while attending Tech Cocktail Celebrate.

Tech Cocktail:  What are the major new attractions in downtown Las Vegas over the last few months?

Schaefer:  La Comida, an excellent Mexican restaurant opened this spring. They have over 100 different tequilas, authentic (their chef makes his grandmother's recipes) Mexican food, and a fun, funky environment complete with a neon ofrenda. Gold Spike has recently reopened and been remodeled with an amazing backyard area where live music plays on weekends, an extensive beer list, an upgraded Grill menu, and games like pool, darts, cornhole, foosball, and shuffleboard. Park and Commonwealth are also awesome spots to grab a cocktail on the roof (at Commonwealth) or in the enclosed, whimsical courtyard (Park).

Tech Cocktail:  What changes are you most looking forward to between now and October?

Schaefer: Obviously, LIB is huge. But we also have some exciting openings coming soon, too. Downtown Container Park is set to open this fall with a variety of food and beverage and retail options all centered around a one-of-a-kind play area for kids and outdoor theater space (check out this video for more). Of course, it will also be home to The Mantis, which is 40 feet long and occasionally shoots flames out of its antennae. Inspire Theater will also be open by fall featuring a 150 seat theater for TED style talks and small-scale performances, an espresso bar, newsstand, coworking space, and rooftop bar. And lastly, Zappos will complete their relocation to their new HQ this fall. The move will start in September and wrap up in October bringing close to 1500 employees to be part of life Downtown.

Tech Cocktail:  In your opinion, what two or three features of Downtown Las Vegas is of greatest appeal to visitors?

Schaefer: I think most people have a very specific idea of what Las Vegas “is.” Downtown is really not like that stereotype at all. It is a real neighborhood where people know and care about one another. It's a place that feels like you could be in a large city somewhere else. And I often think, when I'm sitting in a room with over a 100 people on a Friday evening listening to a talk by an incredible speaker, that nearly everyone in the world would be surprised. I'm sure that isn't what folks think of as a typical Vegas Friday night.