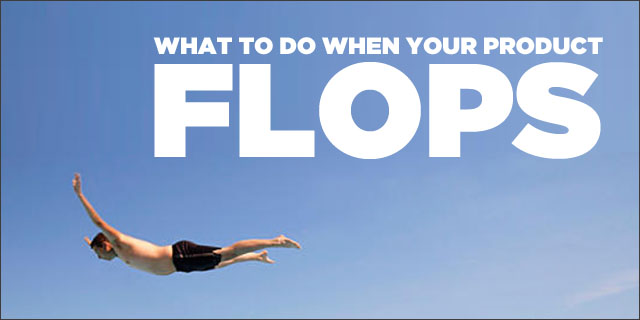 You spend weeks, months, or even years of your life building a product that flops. No one wants it; no one’s buying it. It’s every startup's worst nightmare.

When you’re building a product for a client, it takes a lot of work to understand the problem your product is going to solve, and it can be difficult to gather useful feedback. You might not discover the original idea was misguided until the product launches and subsequently flops. What do you do then?

What to Do When Your Product Flops

It’s easy to get frustrated when a product fails because no one wants it. You may want to just scrap it and move on, but first, you need to address the issue to avoid making the same mistake on another project.

Here are four steps to improve the success of future projects and maybe even salvage your current one:

1. Identify the problem. Sometimes, failure doesn’t occur because the product idea itself wasn’t good. Before you abandon your idea, make sure there wasn’t a marketing miscommunication, user error, or technical factor in play. If there is, you may want to try tweaking the product or your communication strategy. If the answer is “none of the above,” you’ll need to cut your losses and move on to the next step.

2. Optimize your processes. How much time did you burn figuring out the product wasn’t good enough? Could you have identified the problem earlier? If so, target that process and optimize it so it will take as little time as possible to arrive at the conclusion that you need to scrap a product in the future.

3. Figure out what’s salvageable. Even if you can’t make use of a product, there may be a hidden gem in the work that’s already been done. Take a step back and brainstorm to see if you can pivot to a similar but better idea for a related product. Yelp originally built an automated email recommendation request system to receive suggestions from friends. The idea fell flat, but a new one emerged: crowdsourced local reviews.

4. Keep it in perspective. It’s easy to get emotionally attached to a project you’ve worked on for months and then be crushed when you find out it isn’t needed. Make sure the people doing the building aren’t taking it personally, and remind them that it’s OK to fail on a small scale. Innovation requires experimentation, and failure is a very real risk in any kind of experiment. The important thing is to go back to the drawing board and try again with a new approach.

Starting over from scratch is a costly process, so it’s critical to learn everything you can from each failure. Your goal should be to collect information from real users and determine whether there’s a different product hiding inside what you’ve already built. It’s far more efficient to take one or two steps back than it is to throw the whole thing in the garbage. If you don’t make an effort to learn from every mistake, chances are good that you’ll hit the same stumbling block the next time around.

Guest author Peter Baumgartneris the founder of full-service Web studio Lincoln Loop, makers of Ginger, an online platform to help distributed teams communicate. Peter is an expert in Django-based Web development and a thought leader in entrepreneurship and remote teamwork. He welcomes anyone to reach out to him on Twitter or Google+.