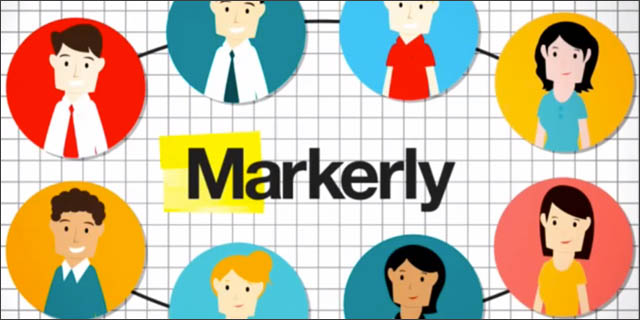 The month before Markerly entered 500 Startups, they saw a big opportunity waiting if they just made a shift – a little scooch, really – in another direction. So they hit pause on the idea that got them a spot in the selective startup accelerator, and hacked out a new one.

Now, they sell their software to website publishers to make their sites tweetable, Facebookable, and pinnable. When a reader highlights some text – which they would normally copy and paste to share elsewhere – Markerly prompts them to share automatically. You can send straight to email or Evernote, too.

Markerly used to be a little software tool that would let you save snippets of text from the web. According to CEO Sarah Ware, they just repackaged the technology with a different logo and cleaner branding, and voila: a product for publishers.

Working with publishers rather than users makes intuitive sense: instead of convincing a thousand people to download their product, they just convince one and it reaches the same readership. And publishers seemed anxious to get their hands on it: they wanted to know what snippets of text and photos readers were sharing and engaging with. It could give them a hint into why some articles do well, and others do poorly – was it celebrity names that stood out, or witty jokes, or something else?

“One article gets shared more than another, and you can guess as much as you want as far as why, but there’s this whole dark web of what people are engaging with inside an article,” says Ware.

But that doesn’t mean the switch was easy. It meant three months of work in the wrong direction, and shutting down a service that some people were avidly using. “It’s always a really tough call to do that,” says Ware. “You have to not be married to an idea, and just go with what’s going to work.”

Even if they’re not married, this is the second idea that Markerly has been courting. We’ll see if it’s the one.

Markerly was a showcased startup at our Tech Cocktail DCWEEK mixer.