Africa has a burgeoning technology community – and now has as a formalized collaboration among the continent’s tech incubators called Afrilabs.

The goal of this network organization is to associate and connect the African technology community to further promote the growth and development. Afrilabs will offer  support to emerging technology labs as well as guide entrepreneurs through the process of taking their ideas to market.

The idea for Afrilabs was conceived when founders from established African tech incubators and open collaboration spaces (Hive Colab in Uganda, ActivSpaces in Cameroon, Nailab and iHub in Kenya, and Banta Labs in Senegal) came together at iHub's launch event and realized the labs share in a common vision to promote technology as a platform for entrepreneurship.

Afrilabs will also work to connect investors and innovators, with plans to nurture an investment fund for seed capital investments.

The official announcement of the association was made early this week by Erik Hersman, director of operations at the non-profit Ushahidi, and founder of iHub in Nairobi. Ushahidi is a non-profit tech company that develops free and open source software for information collection, visualization and interactive mapping.  Erik, traveling in Amsterdam on business, graciously took time out to answer some questions for Tech Cocktail.

Is Afrilabs a formalization of a function that you along with the iHub (a tech community facility with a focus on young entrepreneurs, web and mobile phone programmers and designers) have been doing for months now?

“I wouldn't say it's a formalization of what we do at the iHub, it's an extension to what we do.  In other words, no single lab/hub alone can be an “association” that offers an umbrella for others to be a part of.  The iHub has offered some leadership in the space, with our particular model, but it takes others with different models, like ActivSpaces in Cameroon, to give a more nuanced look at how the labs can operate across the continent.”

How would you characterize the co-working/hub situation in Africa as compared to hubs in the US – are you that far off from US cities or regions trying to coalesce technology entrepreneurs  around coworking, or are there barriers in Africa's urban areas that still need to be overcome?

“I'm quite familiar with the coworking setups in the US, and visited many of them and got to know their founders, before embarking on the iHub.  The main difference is this;  the US and European cities that have coworking spaces tend to also have communication between the different spaces to help in their growth.  On top of this, if they're the type of space that acts as an incubator with access to capital and markets, they also are in areas that generally enough capital in them to support them alone.

In Africa this is a little different.  There isn't a culture or history of coworking spaces, tech incubators and seed capital funds (like TechStars or Ycombinator).  We have to build that here, and it has to be something that is owned by and made for the African tech community.”

On the flip side, are there barriers in the US that Africa is free from?

“I don't know if there are any major hurdles in the US or Europe that Africa is free from.  However, there are fewer regulation hurdles for many of the spaces and for the entrepreneurs trying new things, so that is a big help.”

The Obama administration recently launched a formalized technological innovation initiative – do you see Afrilabs acting as that type of NGO catalyst for Africa?

“If anything, the labs tend to serve as market catalysts, with real entrepreneur activity to build new markets and make money.  The NGO side of the equation tends to provide a net decrease in markets, so we hope to get more real businesses off the ground than NGOs.” 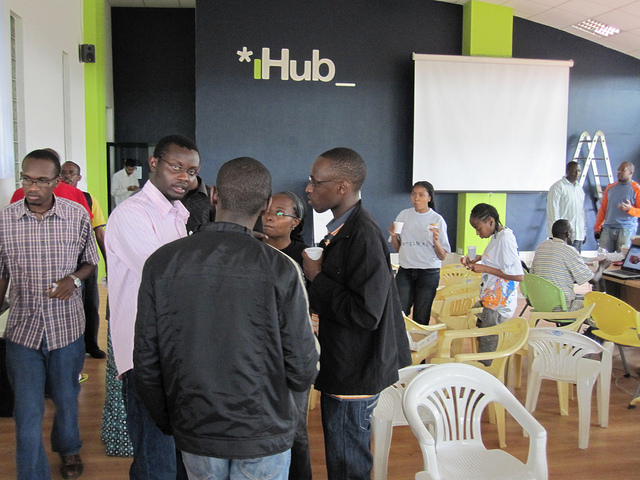 In an interview with Fast Company, you said that you are in the process of starting an investment fund for seed capital investments “that are accessible to startups that come through the different labs” – how is the connection between investors and innovators happening now?

“Well, there's not much happening right now, which is one of the reasons Afrilabs was started.  Currently, there are very few urban areas that are putting out enough innovative technology startups for investors to find.  There's not enough mass.  Afrilabs serves this space best by creating an easy-to-find and use filter for investors to find startups throughout the continent without having to travel to each country and do their own search.

The fund we're building is a way for us to directly address one of the greatest problems we see: lack of seed capital to test an idea and prototype.

Innovation in tech is like a pyramid, with very few successes sitting at the top.  We need to get more new and risky ideas funded at the bottom in order for more successes to make it to the top.  Many organizations don't have the capacity to look across Africa, find and manage those seed investments to get them to a real investment stage.  Afrilabs is well positioned for that, and the labs in each country serve as a wonderful filter to find the good entrepreneurs and ideas.”

On the Afrilabs website, it says: ‘We have two primary activities where on one side we are looking to support the development of healthy/sustainable labs and on the other we seek to support the most promising entrepreneurs ready to escape their walls.’ Can you elaborate on that, ‘escape their walls’? Besides the obvious collective benefit of communication and collaboration, how does Afrilabs benefit the individuals involved?

“That comment was directed at the problem of seed funding.  As mentioned earlier, there are some incredibly hungry entrepreneurs with excellent ideas.  Lack of seed capital means that they go work for another company and generally don't have the ability to escape that reality.  Our goal is to provide another path for Africa's technology entrepreneurs.”