I just finished listening to Brian Chesky’s talk for Startup School from a few months ago. If you haven’t watched it yet, you’d be well advised to do so (find it here and embedded at the bottom of this post). Aside from being hilarious and entertaining, it also provided a unique view into the will, determination, and scrappiness that it takes to start a company. There were lots of great lessons, but one thing in particular caught my attention: AirBnb’s initial user acquisition model was not scalable.

An Intro to AirBnb
AirBnb is an online marketplace that helps users list and rent their most valuable personal asset: the space in their house (well, now treehouses & boats as well). The company has grown tremendously over the last few years, thanks in part to a great user experience and solid value proposition, but also due to some great marketing. They also have an incredible iPhone app (from what I hear at least, I’m on Android). 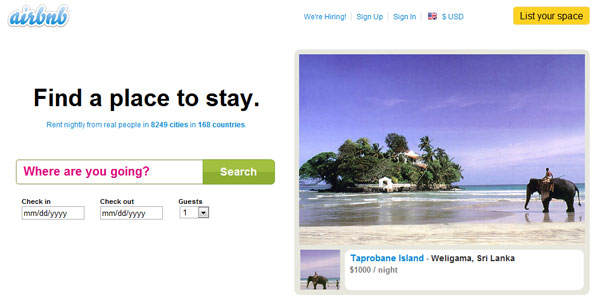  
As a two-sided network, AirBnB needs two distinctly different users to go to their site: a lister and a renter. They can’t create a transaction without those two parties.

The Unique Challenge of Two Sided Networks
Having been in a handful of investor presentations, a question that inevitably comes up with marketplace businesses is: how will you grow the network? It’s a valid question, but for a startup with just an idea or barely functional prototype, it can also be difficult to answer. The founders of AirBnb had a difficult time building their network, and it’s no surprise: marketplace businesses are notoriously difficult to build. Here are just a few reasons:


The Importance of Non-Scalable User Acquisition
The AirBnb story caught my attention not because it’s the first time I’ve heard of marketplace companies using non-scalable user acquisition methods, but because it’s probably the fifth. One great example that comes to mind is SitterCity.com. SitterCity is a Chicago based company that has built a two-sided network that helps connect parents to babysitters. Genevieve Theirs, the CEO, tells a story of the early days of Sittercity when initial user acquisition came from papering dorms around her campus with fliers for the service. Was that scalable or cost effective? Probably not. And although I’m sure she had no intention of moving forward with this model, it helped her get in touch with her customers and get immediate feedback on the service as well as provided a solid seed for the network.

Similarly, Brian Chesky and the AirBnb team, after working restlessly to build their two-sided network, were coached to get out and just start meeting with customers. And then something miraculous happened. Through this highly un-scalable process, they signed up new users. But, even more importantly, they learned about their customers and their unique set of needs. A few business model tweaks later combined with the seeded network that they had built, and the company left ramen profitable in the dust.


Get Out and Build your Network
Long story short, if you’re looking to build a two-sided network business, don’t be afraid to just get out, roll up your sleeves, and make something happen. As Steve Blank says in his Customer Development process: “there are no facts in the building; get out and meet your customers”.

Alex Bovee is a product junkie and startup enthusiast. When he’s not thinking deep thoughts about products, marketing, and analytics, you can catch him on the slopes, climbing walls, or out hiking. He is a graduate of the University of Chicago Booth School of Business and currently lives in San Francisco.