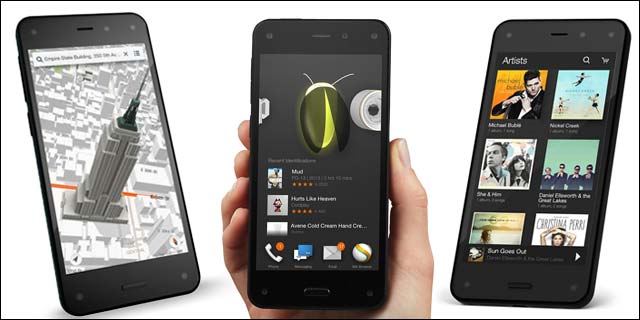 After a lot of rumors, Amazon finally launched its first smartphone: the Amazon Fire Phone. The phone was released at an event in Seattle on June 18. It's a futuristic phone equipped with 3D Dynamic Display and Firefly.

This is why the Amazon Fire Phone is getting a very positive response from mobile geeks. As the rumors predicted, the device sports a 4.7-inch LCD display with 720 x 1280-pixel resolution. The company followed Apple’s legacy, making the average-sized display neither big nor small. Nowadays, every company is offering protection to their phone’s display, so the Amazon Fire Phone has Gorilla Glass 3 protection, with a rubber frame around the edge.

The hardware is a big part of any gadget, so Amazon made it powerful to compete with the Note 3 and iPhone 5s. The phone is packed with a 2.2 GHz Qualcomm Snapdragon 800 Quad-Core processor, with 2 GB of RAM. The Fire phone runs on its own OS, Amazon Fire v3.5 (an Android-based OS).

It has a 13 MP primary camera with auto focus and LED flash, as well as a 2.1 MP front camera for video calling. It also includes an accelerometer, gyro, proximity, compass, and barometer sensors.

On the connectivity options, the phone is equipped with all advanced features including Wi-Fi 802.11 a/b/g/n/ac, dual-band, Bluetooth 3.0v, NFC, GPRS, Micro USB 2.0, and 4G LTE. It has a non-removable Li-Ion 2400mAh battery, which can deliver talk time up to 22 hours and video playback up to 11 hours.

The phone comes in two variants, 32 GB or 64 GB, but no option for expanding the storage. Amazon has offered 5 GB of extra storage through the Amazon Cloud drive.

You will get better audio while watching movies, since Amazon included dual Dolby stereo speakers with it.

The Amazon Fire Phone comes with 3D Dynamic Perspective features that adjust the image on the display based on your face position. To produce a 3D effect, it uses four front cameras around all the edges.

The phone also includes a new shopping app where you can scroll between items by tilting the handset right or left.

Firefly is another unique feature that allows you to search real-world objects on a search engine. Printed telephone numbers, images, DVDs, and codes can be identified easily by pressing a button.

The device is really an awesome gadget and likely to be popular thanks to its unbelievable specifications. If you order it now, then you also get a chance to become a premium Amazon member.

Deepak Raghav is a tech enthusiast who loves to write on topics related to graphics, latest gadgets and technology. He is the editor of www.spiderorbit.com.