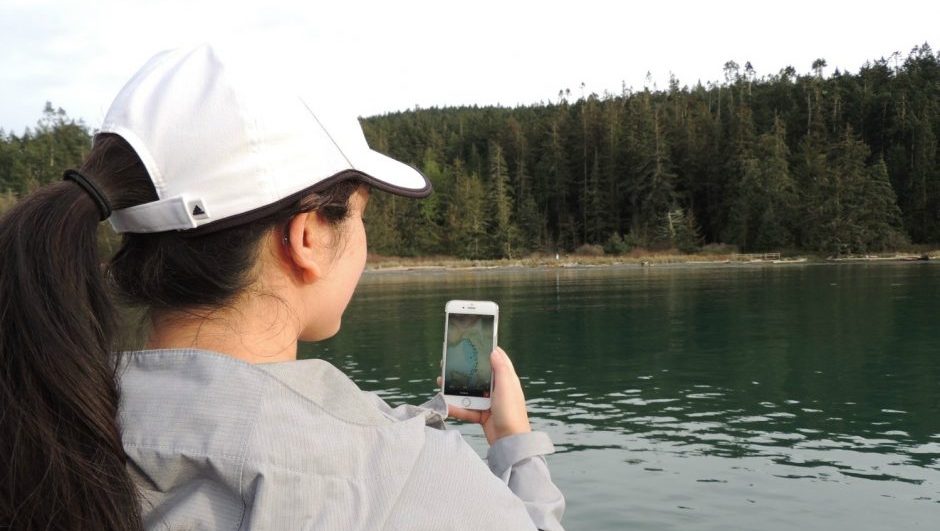 Imagine finding yourself in the middle of the Grand Teton National Park, enjoying a weekend unplugged from the world, and the bear from The Revenant walks over to your campsite. You need to make a call for help, but alas you have no cell reception. Unlikely scenarios aside, there are endless reasons why a solo-traveler may need to reach the outside world while hiking, but cell reception is not always readily available.

While few and far between, some devices improve range or create mesh networks, but for everyone else they are typically left relying on their survival skills. Cairn, which shares a name with those random stacked rock piles you see while hiking, is an app that lets you take technology you already have, and helps hikers to find cell reception. Not only that, it also lets loved ones know where someone is while hiking, the last known area they were in, health stats, and develops a crowdsourced map of reception or dead spots in the wilderness.

In Tech.Co’s ongoing series to highlight the similarities to entrepreneurs and athletes who push their limits, we spoke to the cofounder of Cairn, Ali Alami, about his motivation to create the app. With a pedigree of success and an assortment of experiences in startups, Alami turned towards what he was most passionate about.

“If you pick a passion, you will be a lot more motivated to work hard at it. There are ups and downs to any business, when you hit one of those low spots, at minimum you are doing something that you love and enjoy. You are more likely to succeed because you picked something you are passionate about,” said Alami.

Getting the Right Gear

Any good business is built on a foundation of goals, missions, prioritization, and maybe a few organizational values along the way. Before the journey can really start, entrepreneurs need to plan and gear up before jumping right in. For some that means taking an idea and going through an incubator or accelerator, others that is working it as a side project, but in most cases there are no true overnight successes in the startup world. As startups go, Cairn is still a seedling and focusing on building those roots while growing at the same time, but before the seed was planted, relationships were formed and experiences were created.

“Through Expedia I met two really good friends, Tove Martin and Brian Terry. My wife and I have gone on a lot of hikes with them, and after Expedia we went separate ways to other startups. Tove went on to Trover, which was acquired by Expedia, and Brian went off to Picnick, which was acquired by Google, shut down, and then employees re-created it with a different brand [PicMonkey],” said Alami.

Prior to startups, he was also a Survival Evasion Resistance Escape Instructor for the US Air Force for nearly a decade. The group still tries to get out and hike, but now with kids in the mix they’ve had to tone it down a bit. More specifically, Alami says perhaps a bit less dangerous stuff. It was on one of these backpacking trips nearly two years ago that the idea was born. Alami was planning to leave town on Friday, traffic was heavy, and he was planning to go to a lake. He already knew there would be little to no cell coverage there, but he wanted to meet up with the group.

“As it started to get dark, Tove and their kids were behind us, and were having trouble meeting up with us. It was really hard to meetup,” said Alami. “As a survivor instructor we always tell people where we are going and when we are going back. We said ‘ok, this is a problem that someone needs to address,’ and being startup people we identified a niche. Tove said let's start another company, and we went through a variety of ideas that had the potential for going big.”

After some back and forth, the duo eventually decided to turn what would soon become Cairn into a passion project rather than a high-growth startup. Alami and Martin decided to build a lifestyle organization that is focused on something they are passionate about, that also meetings a specific need in the market. The market for outdoor and hiking related needs is also surprisingly large. According to the Outdoor Industry Association, the outdoor recreation market accounts for roughly 6.1 million jobs and $646 billion in consumer spending.

Though passion was the focus, Alami and Martin knew that as entrepreneurs it would also be a challenge to still focus on the fitness side of what they love.

“We knew that we needed to stay healthy and we know how hectic entrepreneurship is. We started doing usability studies while backpacking with users testing the app or just doing a run in my neighborhood. By doing that we are maximizing our time. My son just turned 7 and he just got into mountain biking. There were many times on backpacking trips, the kids would just fall asleep, and we’d sit around the fire and talk business strategy. We have made so many decisions so far, but the ones we make in the outdoors are usually the ones that are the right decision.” 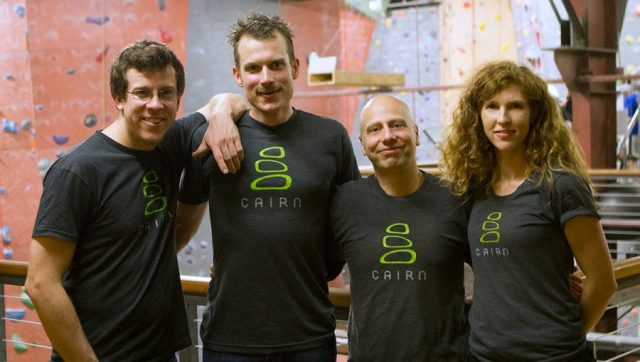 Passion for the outdoors is more than just a guiding star for the Cairn team, it’s built into how they work as a company. As entrepreneurs, sleep can often feel like a luxury, but in a world where health and fitness takes priorities, getting in your eight hours really matters. Though Alami knows getting in sleep is not always possible, the team integrates a balance of work and life.

“We wake up early for a hike or climb, def go to bed early that night. My wife is a nutritionist and was was in culinary first, so we eat pretty healthy. No fast foods,” said Alami.

But the organization is about more than just sustaining their lifestyle and fun. They're also doing something good with their efforts.

“We are still young enough where we have time for another startup, or we can always go back to the corporate world if we need to. So now it’s time to try something fun, but we can make it go big. That drives a lot of decisions and the focus on quality, but the other piece is doing something that is returning to the community: to have a healthy lifestyle and to get others out there while staying safe. It empowers people. We have quite a few solo female hikers on the app, and now they are not as worried about getting lost or venturing out beyond their personal limits.”

Typically when you think passion, most would assume there is a priority shift from work into play, or in this case hiking first, business second. As the team decided to focus on a work-life integration, passion drives both components, which is why Alami is not concerned if the app and business really take off.

“In an ideal world, we would continue doing the same thing, even if the team got bigger,” said Alami. “Graham Zimmerman is one and is in Alaska, Stacia Glenn is another and was in Nepal. Both super good athletes and climbers. Ideally we could continue to have meetings, I can see us renting houses, going to a hotel for a conference and people can go hiking, to still be able to experience that. I don’t think you have to compromise one for the other.”

In addition to passion, the team has a mentality of less is more. By staying focused and prioritizing projects, you don’t have to go overboard on business hours. With fewer choices to make, time becomes more flexible and it’s easier to make the right decision while still growing.

“At any given day there are hundreds of things we could work on. We thought ‘right now we are not making any money, this was 6 months ago, and we decided we really need to engage users right now instead.’ First it was ‘how do we engage with them on the trail before we are making money?’ We could have done three or four different things, but focused on one, consumer engagement. It allowed us to maintain that lifestyle,” said Alami.

Next on Cairn’s Journey: Growth

Growth for startups typically consists of users, engagement, and downloads, but that is not necessarily the same for a quality focused organization. Until now, Cairn’s development was focused on the mission of having a great app, which in turn would result in more users. As a result, word-of-mouth has helped the team grow to more than 12,000 downloads in the past few months, and has tracked more than two million points of cell coverage so far.

“We are not just logging for coverage, but also mapping the wilderness, which we then crowdsource to everyone else. In colorado, out of the 14,000 peaks, we’ve got coverage and data on over two-thirds of them. That’s almost every major mountain in the West coast. Most national parks in the US have pretty good coverage too,” said Alami.

Eventually though, they decided it was time to prepare for and embark on more challenging paths. To do this, they started by looking at weak areas such as user engagement, and began building out new features that would encourage people to interact with the app more.

“That’s where we started to add more stats about hiking distance by month and year, trails ran, etc. Users can segment activities by different types too (biking, hiking, etc.).Think of this as a Waze for the wilderness,” said Alami. “You send out a safety note to a family member and just go. It then tracks your location every minute. You can also adjust the settings so as not to use as much battery. Because each phone is using GPS details even without coverage, it still tracks the information, too. It also shows all carriers in the data. You may not be able to share an instagram photo, but the other carrier will support 911 call out.”

Preparing Future Entrepreneurs For The Road Ahead

When asked how other entrepreneurs facing a dilemma between running a high-growth business or pursuing it with emphasis on passion, Alami says it’s all about the team and focus points.

“You should find a partner or team, someone who shares your passion. For example, I go for runs with my cofounders and we can discuss things on runs. Say you’re a runner, you can find another person that compliments you really well, you work well as team, and you both can have meetings while running. Finding the right partners or cofounders, is important. Then, focus narrowly on a problem in your industry, and solve for that.”