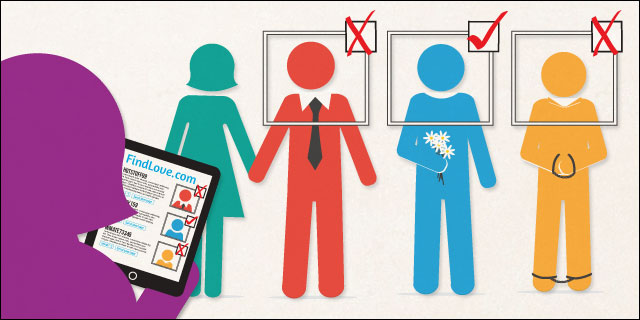 Online dating has become so popular in the U.S. that one out of four couples meet online. For example, 20 million people use eHarmony.com and 15 million have a profile on Match.com. An increasing number of single Americans meet their significant other online: 20 million people visit a dating site at least once a month, and it’s estimated that online dating is responsible for 120,000 marriages a year. The Internet has become the second most common way to find a partner, the first being introduced through a friend.

However, many people don’t trust the strangers they meet online. A recent study by Pew Research Center in Washington found that 30 percent of online daters search for information about their possible dates before meeting them. This figure rises to 41 percent among 18- to 29-year olds. The number of people scoping out potential love interests on social and search engines has more than doubled since 2008.

While the majority of these people are just curious about past relationships and other relevant dating information, many seek out more details about their potential dates to screen for criminal offenses or court appearances. In this case, users can review public information made available by local government offices or conduct full criminal background checks with services like Instantcheckmate.com to find out if their date can be trusted. Some online dating platforms like eHarmony.com, Match.com and Sparks Networks (operator of JDate and ChristianMingle) have even begun scanning clients for instances of sexual assault, identity theft, and violence since 2012.

The reason for these safety measures is that a complete stranger on the Internet can pretend to be anything—while actually intending to harass, scam or even hurt their victims. A staggering 54 percent of survey participants complained that they encountered a person’s profile that was misleading. Whereas most people tweak their profiles to look better, some create entirely fake profiles to take advantage of unsuspecting victims. “Catfishing,” a scam that involves posting false information to trick somebody into a relationship for monetary gains, caused $50.4 million  in collective losses in 2011 alone.

Women are especially vulnerable to these online perils. More than 40 percent of the women participating in the Pew research study stated to have been victims of ‘unwanted approaches’ compared to only 17 percent of men. Regarding social media websites, a third of women (and 19 percent of men) reported that they had blocked someone for flirting or acting in an inappropriate manner. In 2011, a Match.com client sued the company saying she was raped on a date with a repeat sex offender—who had had at least six prior sex offense convictions—she had met through the site.

To protect online daters, Illinois passed a law last year, the Internet Dating Safety Act, which requires these websites to tell users whether they do or don’t conduct criminal background checks (a handful of other states have similar laws). “With online dating becoming increasingly popular in the 21st century, it is important to make sure its participants are safe and aware of potential risks,” Governor Pat stated in a news release. “This new law will help keep Illinois citizens both financially and physically safe from predators they may unknowingly encounter when using an Internet dating service.”

However, this new legislation was met by some criticism. The Internet Alliance, which also represents eHarmony.com and Match.com, initially protested that conducting background checks would be too overly burdensome for the sites. The law also allows dating sites to be fined up to $50,000 if they don’t disclose their background check policy or post safety warning. A few lawmakers question the efficacy of mandatory background checks on online dating sites: “My greatest fear would be the false sense of security,” State Rep. Jim Sacia told the AP, as only law enforcement agencies are properly versed in conducting such checks.