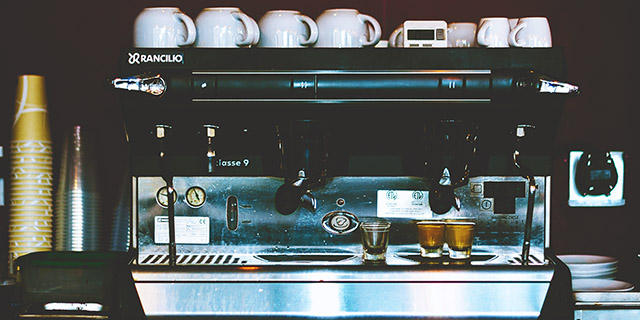 As both a writer and an employee of a startup, flexibility in work location is something implied – something uniquely innate for both identifiers; whether that's actually working from an office or doing my work from home or a coffee shop, I need (and have) the option to do my work remotely. Living in a big city like New York, though, it can sometimes be a bit overwhelming trying to determine where I should work on any particular day. Crew, a Montreal, Canada-based startup that offers an on-demand collaborative marketplace for creative professionals, has created something that I'm sure all remote workers desire: curated lists of the best coffee shops in several large cities, including each coffee shop's recent Wi-Fi password.

Crew's Coffee+Power project lists the top coffee shops in several cities across the world and includes the Wi-Fi passwords for each respective coffee shop – this, in particular, makes it an ultimate resource for anyone hoping to get work done from a coffee shop. According to the company, the shops listed were recommended to them through their site by people from across the Internet, and were then vetted by the company itself. To determine whether a coffee shop belongs on the list, Crew looks at its corresponding score on Foursquare and only considers those with a rating of at least 8.0. The coffee shops listed were determined to not only have great coffee, but to also offer great working environments with several outlets and reliable Wi-Fi. And what's great is that – if you have you a Foursquare account – you can easily save the lists compiled by Crew. 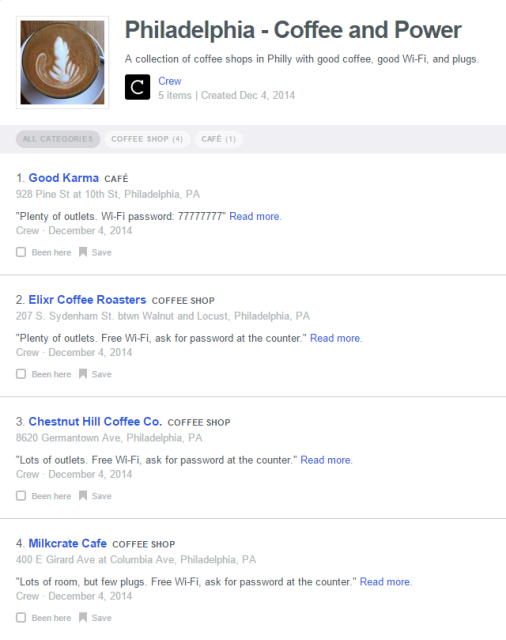 A snippet of one of the best coffee shops lists curated by Crew. (via Crew/Foursquare).

Depending on where you're located, sometimes there can literally be hundreds of coffee shops and cafes in your city. While options are certainly great to have, they can also pose a great challenge for those who want not only a great work environment, but also some equally great amenities (such as great food, coffee, and Wi-Fi).   There's always a level of hesitancy when considering to work from a new coffee shop , and we bombard ourselves with several questions to determine whether it's truly worth it to walk half a mile to So-and-So Roasters: Will there be enough seats? What's the likelihood that I'll land a spot near an outlet? Is their Wi-Fi going to be awful? Can I find hot grad student dudes there? They're all equally important factors to consider, and many of them are solved through Crew's Coffee+Power project.

In the United States, telecommuting has increased by about 79 percent between 2005 and 2012, with an estimated 6.1 million Americans currently engaging in remote work. And these numbers are expected to keep rising, as companies see the benefits of having workers work remotely and as workers seek more flexibility in their work situations. This is coupled with an increasing desire to pursue a startup culture (in which telecommuting is generally accepted) and similar increases in the freelance economy (who work largely from coffee shops, if not from home).

Currently, Crew's Coffee+Power project has coffee shop listings for the following U.S. cities: New York, NY; Boston, MA; San Francisco, CA; Los Angeles, CA; Philadelphia, PA; Seattle, WA; Chicago, IL; Denver, CO; and Houston, TX. They also have listings for four cities in Canada, as well as listings for London, UK; Hong Kong, China; and Stockholm, Sweden. However, the company says that it's an ongoing project, and will continue to expand their lists as long as people continue to recommend the best coffee shops through their site.

Check out Crew's Coffee+Power project for a list of the best coffee shops in your city!