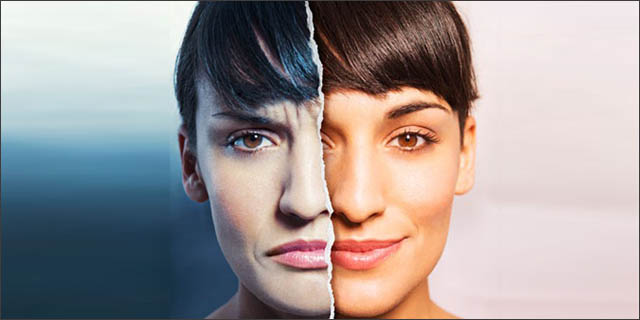 Self-knowledge through numbers – the idea that self-quantification tools can help us understand more about ourselves, ultimately leading us to improve our daily functioning and quality of life. This concept of the “quantified self” was made popular by Wired editors Gary Wolf and Kevin Kelly, just a few years back. Since then, we've seen an increase in technologies – both software and hardware – that provide us with better insight into essentially anything about ourselves: from the average number of calories we lose in a 30-minute cycling session to the kinds of genetic health risks that affect us.

Because the goal (for many) of quantifying various aspects of our lives is to improve their overall quality, the mobile market has seen an increase in the number of apps that offers capabilities for tracking our human behavior and emotion. The myriad habit and mood tracking apps now available all aim at an inherent human conviction: we all want to be the best versions of ourselves.

Whether you want to develop a habit for exercise or learn more about your occasional emotional breakdown (and how to prevent it in the future), here's a compilation of the best Android and iOS apps that you should be using. 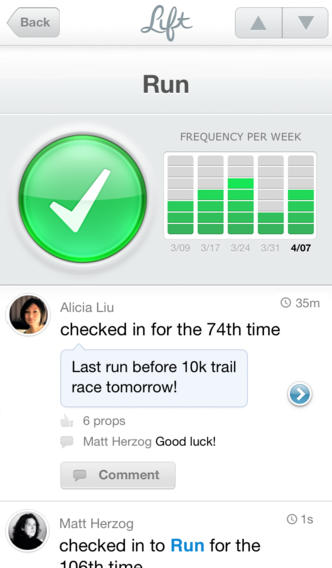 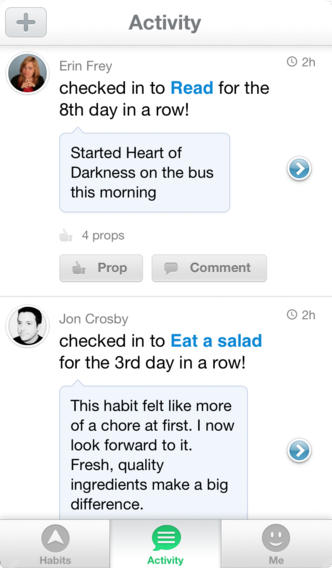 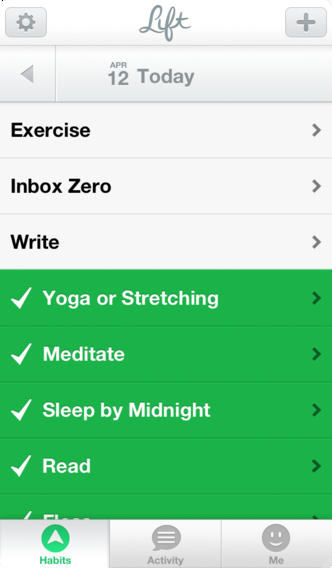 Incubated by The Obvious Corporation, the Lift app aims at helping users form their desired habits. Originally only available on iOS and Web, the app recently became available to Windows and Android phones through a mobile Web version. Lift allows users to check in to various habits (e.g., floss) they want to develop over time. The app offers different display graphs to show the frequency with which each habit is performed. Compared to many other habit trackers on the market, Lift has a responsive design that keeps it clean and simple to use. The other standout thing about Lift is its focus on community support; every habit that a user tracks is made public to the rest of the Lift community, and other members can give you “props” on your check-ins or even provide encouraging comments. Check out this post for improved Lift strategies. 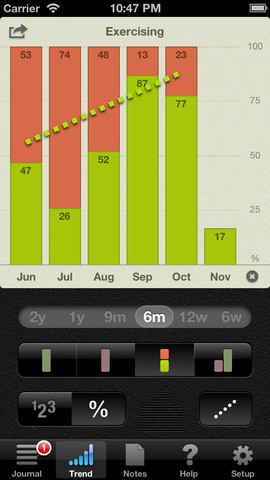 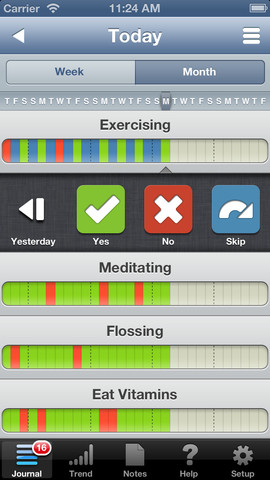 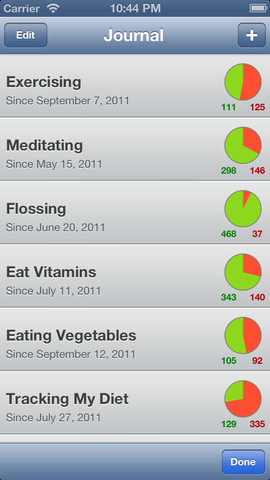 Way of Life is a beefed-up habit and goal tracking app that places a lot of emphasis on data tracking. After adding your desired habits, you keep track of your daily progress by marking whether you did or didn't perform any one specific habit. What makes Way of Life unique, though, is the ability for the user to “skip” a day, rather than completely breaking the chain. There's also a note-taking function that allows you to attach details to each individual check-in. The true value of Way of Life lies in its data presentation capabilities. Your progress on each habit can be presented in pie or bar graphs, giving the user an overview of their performance trend over time. Further, these data charts can be shared over social media and easily exported as CSV or Excel files. 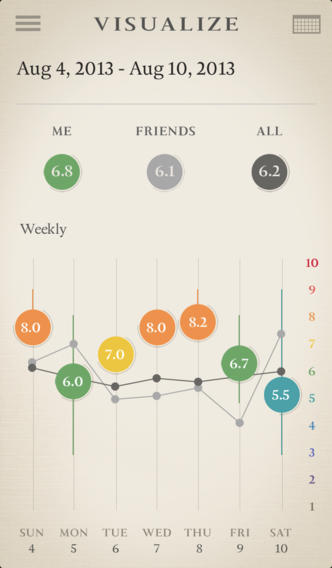 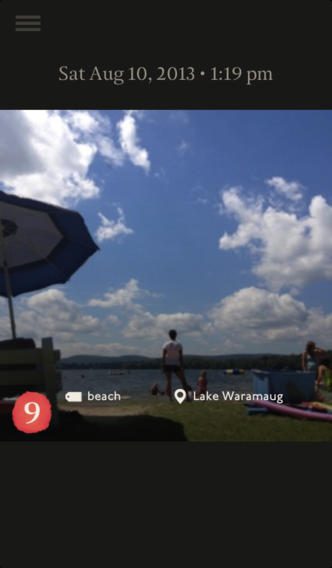 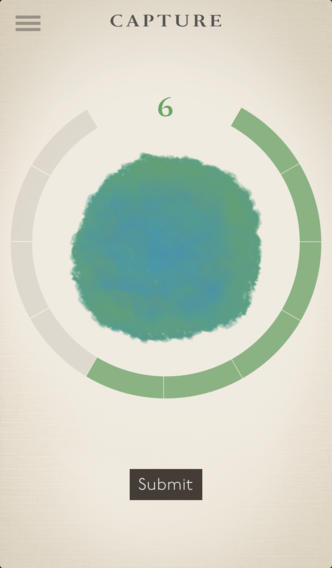 Off the bat: Expereal is a beautiful app, with minimalist graphics; if anything, you should use this app for its mere aesthetic. Designed to allow users to “rate their lives” (on a 10-point scale) at any given moment, Expereal essentially becomes an app committed to giving users the ability to monitor their moods throughout the day. With each rating, users are encouraged to add additional details (location, tags, and people you were with) – information that's used to create data visualizations that help users get a better understanding behind specific mood states. 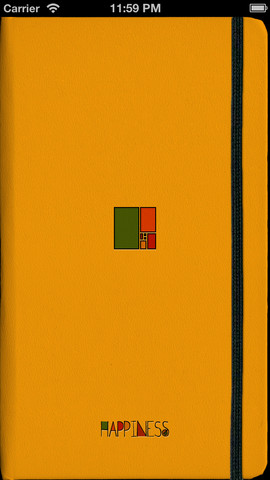 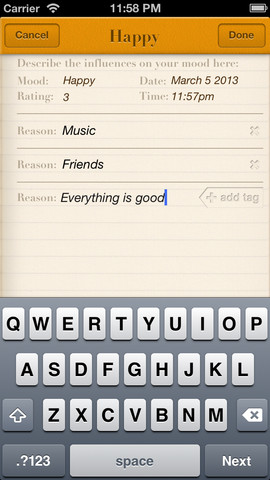 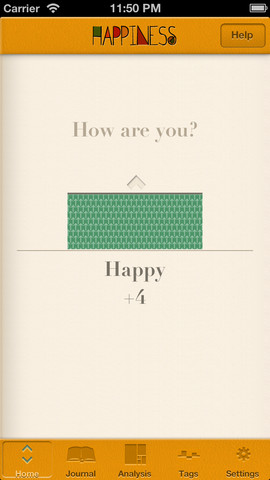 I've written about Happiness in a previous article. It's a mood tracking app that places a lot of emphasis on its journal function. Using a sliding scale, you rate your current mood as a value between -5 and +5, with negative and positive integers correlating to appropriate degrees of sadness or happiness. From there, users are provided with the opportunity to write the reasons behind that emotional state, ultimately serving as a self-reflective journal. This data is compiled in a simple infographic that gives the user an overall view of their emotional self. 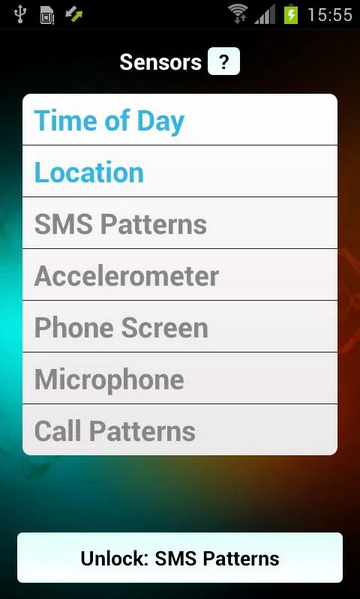 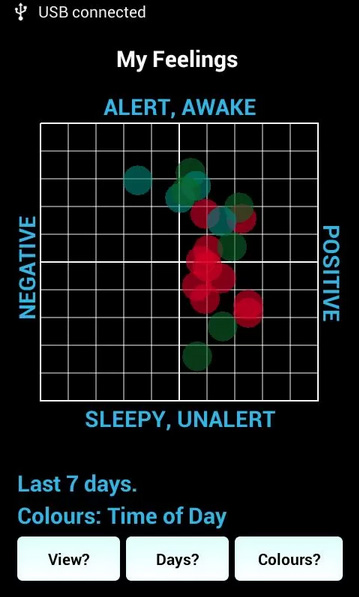 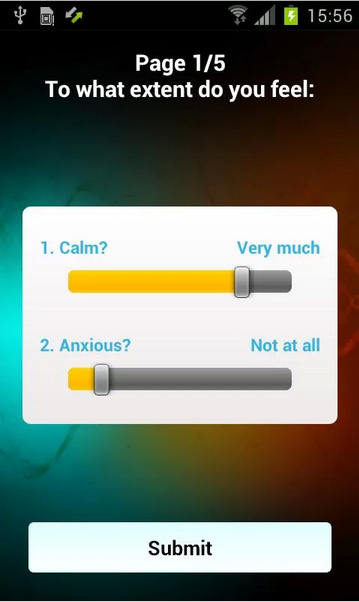 Emotion Sense is a mood tracking app that fully utilizes the technology behind smartphones. The app invisibly monitors various data, such as a user's calling and texting patterns, to track what effects such interactions can have on overall moods. Using a phone's GPS, accelerometer, and microphone, the app aims to develop a pattern of a user's habits, activities, and routines. Throughout the day, users are prompted to rate emotional states through a brief survey. Developed by the Computer Laboratory at the University of Cambridge, Emotion Sense is part of a research project that looks at the extent to which smartphones can monitor moods and behaviors. 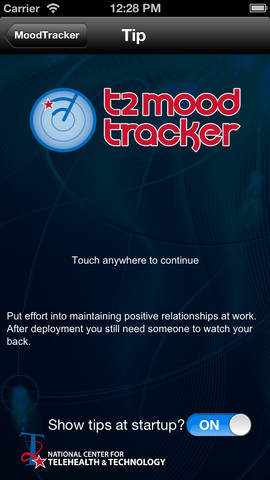 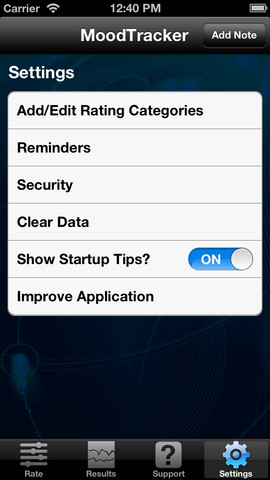 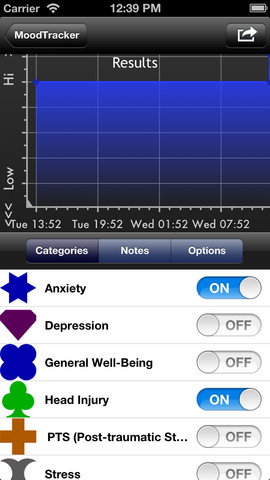 This mood tracker was initially developed for military service members to record and review behavior changes. Because of this, the app is designed to track data that is helpful for both users and their doctors. Unlike other mood tracking apps, T2 Mood Tracker allows users to track emotions per any of these individual issues: anxiety, depression, general well-being, head injury, post-traumatic stress, and stress. Simple sliders are used to rate various aspects of your emotion, and notes can be added to each mood evalution. All of your data is compiled into a simple graph, as well as into a spreadsheet file that can be easily shared with your health care provider. 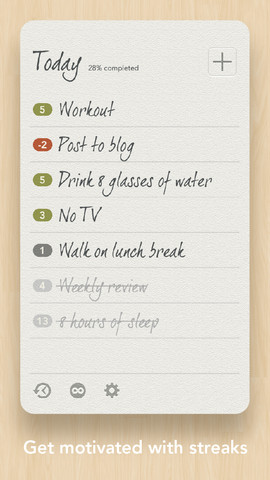 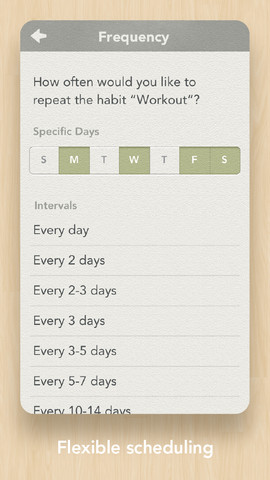 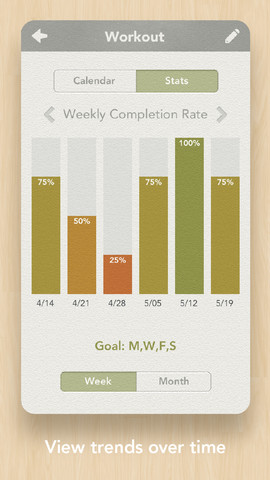 The standout feature about Habit List is its flexible scheduling capability. Users can choose from three kinds of schedules for each habit they want to create: specific days, non-specific days, or intervals. So, say, you can schedule “exercise” for only Tuesdays, Thursdays, and Sundays, while you schedule “write a blog post” for any two days of the week. The feature helps remove the guilt associated with broken streaks – something that inevitably happens when using other habit tracking apps lacking this scheduling function. 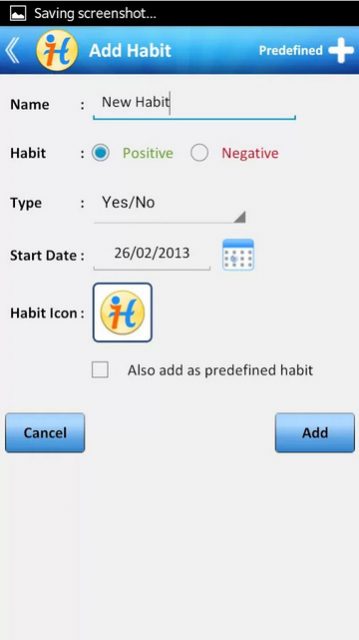 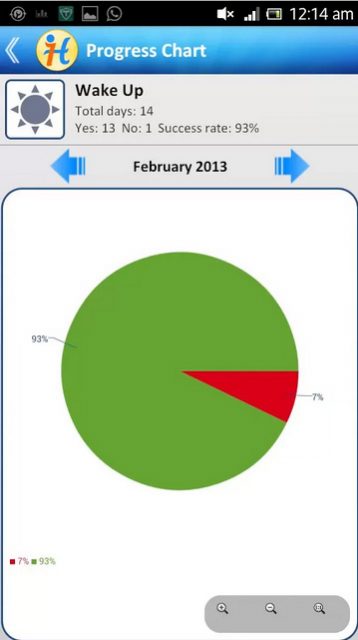 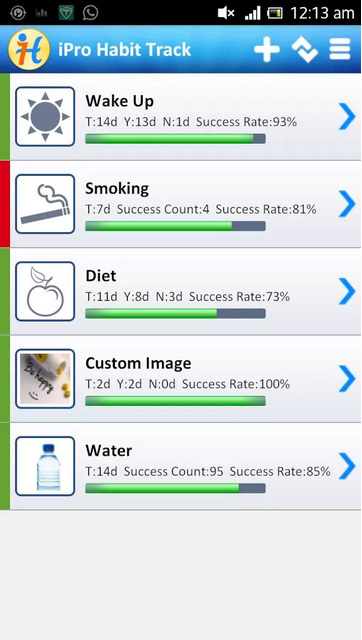 This Android habit tracker lets users track both good and bad habits, whether those habits are tracked on a daily or otherwise recurring basis. Users have the option of tracking predefined habits, such as “brush teeth” or “smoking,” or their own customized habits. The pro version of the app allows you to set alarms and reminders, offers multilingual support, and more detailed reporting of your data.

Download it for free or go pro on Android. 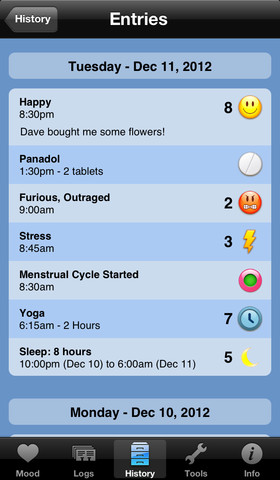 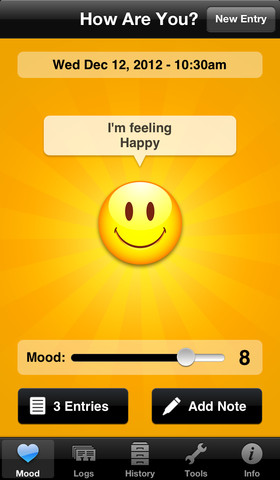 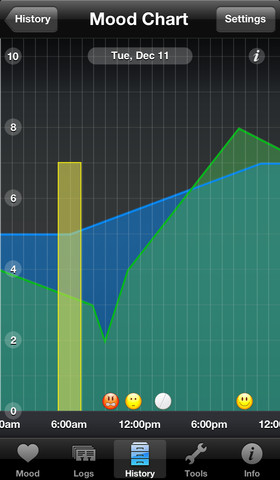 On top of tracking your current mood, MyMoodTacker allows users to keep track of the various things that may influence those moods. These include sleeping times and sleep quality, as well as medications taken, amount of exercise performed, stress levels, and menstrual cycles. Despite its use of varying smiley faces, it's a really robust app that provides users with a much more complete overview of their emotions.

Habits offers features already available through other habit trackers on the market. What separates it from others is that it's an OS X app. This gives users the ability to track their habits directly from the convenience of their Macs, foregoing the need to look at data from small, mobile screens. Purchase of the app also gives you access to a free iOS app with the same functions. However, the app does cost $19.99, which is kind of a bummer.

Download a 15-day trial of Habits directly from its site.