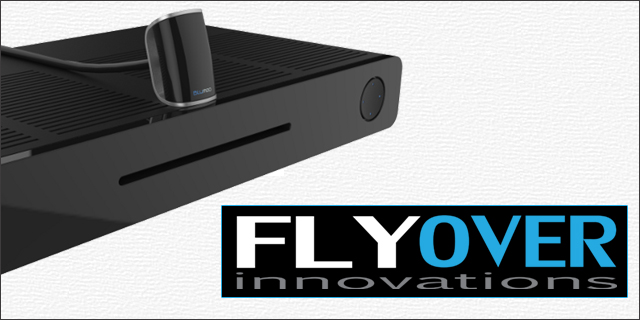 You have a high-quality stereo system that powers outdoor speakers on your deck? Awesome, but can you manage playlists and change songs without walking inside? Is everything readily available at the touch of a button on your Bluetooth, smartphone remote control? Of course not; that would be impossible. Or is it?

This dilemma was all too familiar for Jason Carman and Mark Vogt, cofounders of Flyover Innovations, but their engineering educations and background work at Garmin gave them the tools they needed to craft a solution.

“From a technical standpoint, it was relatively simple for us to create something new to solve this problem: aka, Blumoo,” says Carman.

Under the banner of Flyover Innovations, Carman and Vogt developed Blumoo to give users full control of their existing stereo equipment, powered speakers, outdoor stereo, or whole-home audio systems at the touch of a button from their mobile device.

Blumoo is a peripheral “pod” device that connects your Android or iOS device, via Bluetooth, to your sound systems. Blumoo itself connects to your stereo equipment via standard 3.5mm jack or RCA connections.

It enables both universal remote control functionality and hi-fi audio streaming. The user interface for the remote is extremely simple, with the standard forward, backwards, stop, play, and pause functions.

Blumoo can work with different hardware, so there are virtually no compatibility issues. It was designed as an inexpensive way to take your existing equipment further in its capability.

Consumers find they have to switch out their high-quality, sometimes embedded, speakers for Bluetooth speakers to obtain the portability that Blumoo offers. The issue that Carman and Vogt recognized here is that Bluetooth speakers are expensive and often provide lower levels of sound quality.

“People have mobile devices that have to be docked for various uses, and that renders them non-portable,” explains Carman. “Blumoo unlocks their truly mobile functionality.”

Perhaps the most exciting feature of Blumoo is that it will be released on an open API platform. This ensures that the app will continue to thrive and grow with the help of innovative developers. The hope is that users might one day be able to go beyond simple stereo capability and utilize their Blumoo and smartphone to control home theater or video functions.

Flyover Innovations wants their flagship product to be held down by nothing as they move forward. They are giving it every opportunity for success, and have launched and Indiegogo campaign to get it as much exposure as possible.

“We want people to use our technology, but we do not want it to be a hindrance to them,” says Carman. “That is why we have designed the Blumoo to be as easy as possible to use – like an ATM.”