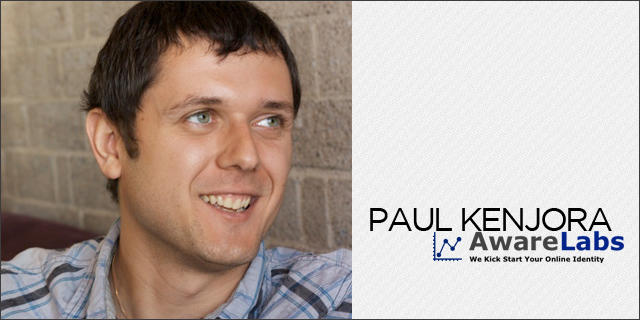 Imagine using your media center as a server for your startup. You're sitting there, watching Netflix, and suddenly, everything goes down. You realize your server just got hit because the Denver Post started using your startup. It happened to Paul Kenjora, and he proceeded to raise $1.5 million for that very same tech startup…in Arizona. Here's his startup story:

Tech Cocktail: How did you get started?

Paul Kenjora: After my first two failures at doing a startup, I did something called One-a-Month, which I think every developer should do. I basically developed a project each month. That was at the time I was learning Python and Django. I created a WordPress plugin, but then the Denver Post started using it. I logged in one day and the server was down. The server was a machine inside my house that was also my media center. So while I'm watching Netflix, it's serving this startup. That's called bootstrapping, right? You do what you have to do, because it works. So when my server went down, I moved everything to Amazon EC2. Of all the One-a-Months I was doing, this is the one that got traction. And I thought, why not go with it?

Tech Cocktail: What was your experience raising money for a tech startup?

Kenjora: I spent a year, just working on raising money. Going to investor pitches, writing business plans, putting together one pagers, rehearsing my elevator pitch, walking into every writing workshop on how to write a pitch and pitch investors. I was raising money in Arizona, this wasn't Silicon Valley so it's not like I could walk over to a different investor event ever week. I applied at ASU, through something called Angelsoft, now called Gust. I submitted my information and someone found it. Then I got a call from someone at ASU saying, “We'd like to set up an interview.”

Tech Cocktail: So what would you say was the key factor for you to raise money?

Kenjora: A lot of it is luck, and a lot of persistence. When you meet your first investor, it's a lot like dating. You go out, you see if you like them. You have to be nice, they're trying to be nice, then you go through a period where you're both not so nice, then you realize what their true colors are.

So you date your first investor for a while, then he decides to introduce you to his friends. It's just like a girlfriend, you date her and then she decides that you're good enough to meet her friends. So you end up meeting his or her friends, and at some point you don't actually do the money raising. It's the first investor that you bring in that sees the potential, then they reach out to their friends and convince them. That surprised me cause I always thought you were looking for lots of investors, and what you're really looking for is an investor rep. I've talked with a lot of other entrepreneurs, and they've corroborated that.

Tech Cocktail: Do you recommend startups go after venture capital?

Kenjora: Now, having said all that, I would say, don't raise money. Having a lot of money gives you permission to mess up. Not having money, and having to bootstrap it, forces you to think really, really hard. Definitely don't raise money thinking the money's going to solve your problems. Raise money because you know exactly how you're gong to apply it and exactly what you're going to use it. And the answer isn't: development…

Take marketing…even the word marketing is too general. Instead, say, here's our travel budget, these are the seven companies were going to meet with, here's how much we're going to spend on dinners. It's gotta be ironclad. The reason you do that is because if something doesn't work, you stop doing it.

Tech Cocktail: What are your thoughts on bootstrapping?

Kenjora: To me, bootstrapping is about finding a business model that you can execute, within your means. Period.

What that means is, a developer might say, “I can code that.” But just because you can code it doesn't mean you can sell it. It doesn't mean you know the right people. I could probably develop software for the Boeing 747. But I'm not going to knock on Boeing's door and some guy's going to buy it from me. So I could spend a lot of energy on it, but odds are, I'm not going to be able to sell it. But some guy who used to work for Boeing, who's their ex-chief engineer, could probably sell it in 10 minutes.

So find something that fits your ability to create, sell, maintain, and promote it. That's where funding can come in. In a bootstrap, the most important part is, you have to make some money on it. So make sure you have a viable product, and it's selling. Then, raise money to scale it.

Tech Cocktail: What advice do you have for other entrepreneurs and startups?

Kenjora: Launch your product to your customers, not your friends. Friends are great, but you should be more interested in marketing to actual customers than getting feedback about how cool your project is.

Make a profit from your first customer. A lot of people think, “We're going to make money eventually.” If you spend a dollar, and you make two, your odds are much better than if its the other way around.

And make it a clear, simple monetization model. When you're picking a model, pick something you can charge for right away and set the expectation that you're going to charge for it. The great thing about that is, you're going to be able to tell right away if people are interested in your product. If someone's not willing to pay $10, charge $5. If not $5, charge $1. If you can't sell it for 10 cents, stop selling it….

Ralph Miller is the director of business development for Flatterline, a ruby on rails development company that helps startups and entrepreneurs develop custom software.  You can find him on Twitter at @FearlessAdvisor.