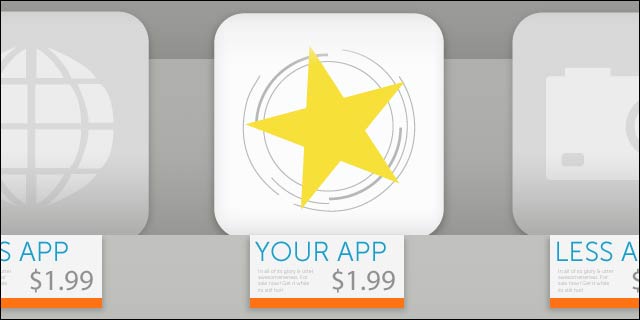 You wake up in the middle of the night, drenched in a cold sweat. Shakily, you grab a pad and paper and jot down the ideas that are swimming in your head. Overcome by exhaustion, your head falls back to the pillow and you fall back asleep.

The next morning, you wake up and read the notepad next to your bed. Apparently, in your midnight delirium, you’ve crafted the most brilliant idea for a mobile app. Your eyes go wide at the possibility of getting this app into the hands of millions of mobile users. You know that it will change their lives forever.

Two big problems … You have no idea how to code, and you don’t know the first thing about getting listed on iTunes or Google Play (the two biggest app marketplaces).

Well, luckily for you, you’re reading this article.

iTunes and Google Play have changed the landscape of software development. Previously, developers couldn’t hope to get their ideas in front of consumers unless they had a publishing company backing them or they gave it away for free. The two aforementioned marketplaces brought the consumers to the developers. Yes, many developers still give their work away for free, initially, but they usually have a way to monetize the app after download.

But back to the crux of the matter; how does someone develop an app and get it listed? Let’s break this down into two different points.

You need one of two things to develop an app: time or money. If you have a lot of one, and not of the other, this will decide which direction you can go for app development. If you have an excess of time, I would suggest you learn how to code.

Coding is the language of software programming. With it, you can build anything you can imagine.  Websites, software, apps, and much more, require programming. Over the past few years, you may have read a few articles touting the benefits of learning to code. In truth, there are immense benefits to knowing how to code.  However, it is a time sink and most of us don’t have the time to learn it.

This brings us to the second factor in app development: money. If you don’t have the time to learn programming, then you should have some money in order to develop your app. There are many firms that create mobile apps for their customers. These firms have the expertise, the experience, and the ability to help you by taking your hastily jotted notes and creating a polished product from them.

Sanjay Patel, CEO of app development firm Perpetuating, states that entrepreneurs must vet their app development companies just as they would a financial or marketing partner. “There are many fly-by-night firms that don't have the experience to develop and bring your app to market”, he says. “Don't be too hasty and pick the right firm with the right credentials. It could save you thousands in the long run.”

Once a solid partner has been identified, they can do most of the heavy lifting for an entrepreneur looking to bring an app to market.

2. Getting Listed on iTunes and Google Play

Now that you have the app developed, you can start thinking about where you’re going to sell it. If the app was created for the iOS operating system, then you will want to list that on iTunes. If you developed it for Android, then Google Play is the place for you. (Note: there is a third option, Windows. However, Windows phones only make up about 3 percent of the US market.)

First, let's talk about iTunes. iTunes is the most lucrative marketplace for apps. There are many more Android users than iOS ones; however, iTunes still makes about double the revenue as Google Play. To get on the iTunes app market, you’ll want to start with their developers tools. This will cost you $99 and entails quite a few steps. As I mentioned earlier, if you developed your app with a third-party firm, they will have the expertise to jump most of these steps and get right to selling your app on iTunes.

Google Play is an interesting place for any developer. Google’s app market share is growing at a rapid pace and will eventually overtake Apple if the trends continue. Therefore, it’s a viable marketplace by itself or should be considered an essential addition if you’re developing your app for iOS.

Like Apple, you also have to start with their developer tools; however, Google only charges you $25. From there you can submit your app through their application submission process. You’ll have to wait for approval, but after that, you’re off and running.

Developing and listing an app on either marketplace can be a tedious and long process. However, if you do hit a home run, the payoffs can be awesome. Very rarely have entrepreneurs had access to a marketplace the size of iTunes and Google Play. Being able to tap into that market place has proven to be a huge success for the lucky few.

So, take that pad of paper, use this guide, and get out there and make your dream a reality.