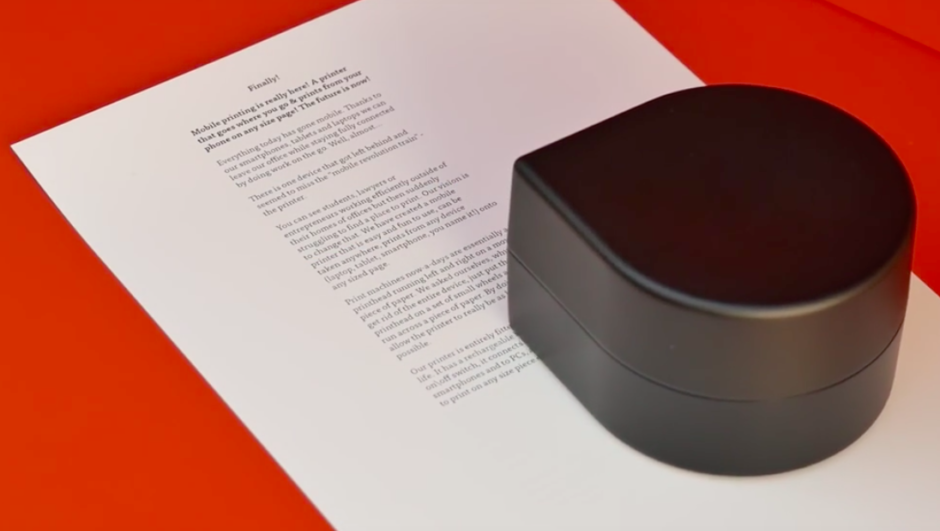 Years ago, printers were a big part of everyday life. Before the digitalization of documents and information, people had to print everything from directions to instructions. And while futuristic technologies have all but outsourced the role of ink on paper, there are still a number of uses for printers that you can't avoid. Fortunately, one company has created a printer that utilizes modern technology to make it fast and easy. Oh yeah, and it's as big as a baseball.

The ZUtA Pocket Printer sounds like a dream. Much like the Roomba, it uses sensor technology to find the edges of the page and prints whatever you tell it to. It can connect to a smartphone or a PC. It has a rechargeable battery and an on/off switch to preserve it. The ZUtA Pocket Printer can even print on large pieces of paper so that posters will become easier than ever. While it's far from fast at only a page a minute, it's still smaller than any printer you've ever seen by a pretty staggering margin.

“People want to be able to print wherever they are,” said Tuvia Elbaum, CEO and founder at ZUtA to TechCrunch. “Even if they are in the office, they are still working from their laptop or their smartphone.”

After a notably successful Kickstarter campaign, the ZUtA Pocket Printer is poised to make a big difference in the office supplies game. While some companies have taken to giving away printers for free in order to create the extreme need for ink, which costs more than an arm and a leg, this revolutionary design will (hopefully) help you keep your expenses low when it comes to printing out your important documents.

As the world becomes smaller and more digitalized, everything will get a lot easier. Printers seem to have been the last frontier of bulky office supplies, but what else could come next? The world of business can always get a little smaller and this product is a step in the right direction.