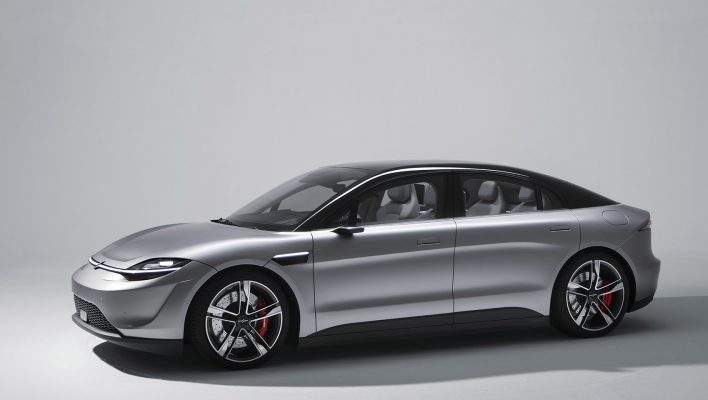 The Consumer Electronics Show in Las Vegas is normally associated with, you know, consumer electronics. But this year, car makers from around the world seem determined to muscle in on the world's biggest tech fest.

We're only a few days into the show and we've already seen Mercedes, Honda, and Toyota show off concept cars designed to make our minds run wild about the future of driving. Even Sony — yes, the PlayStation company — has seen fit to create a concept car for the show.

So, let's take a look at each of the manufacturers' offerings and see which ones (if any) might make it onto your driveway in years to come.

Mercedes' CES offering is a sleek sedan with lots of curves and scoops, packing some enormous wheels. The design was apparently inspired by the 2009 film Avatar — we don't get it, either.

Promising “a completely new interaction between human, machine, and nature,” the AVTR concept embodies the German company's vision of driving in the distant future. Instead of a steering wheel, for example, the AVTR has a “multifunctional control element” which allows humans and the machine to merge, with the car recognizing the driver by their heartbeat and breathing. Again, we don't get it, either.

Equally mold-breaking is Mercedes' promise that the AVTR will use “a revolutionary battery technology based on graphene-based organic cell chemistry that is completely free of rare earths and metals.” The battery materials will also be compostible and completely recyclable. If this tech actually becomes a reality, it'll be great to see it in action.

However, Mercedes hasn't completely forgotten that the AVTR is supposed to be a car. In what will doubtless be a boon to parallel parking-phobic drivers, the AVTR can move sideways by “approximately 30 degrees.”

Will it get made? Our prediction, absolutely not. 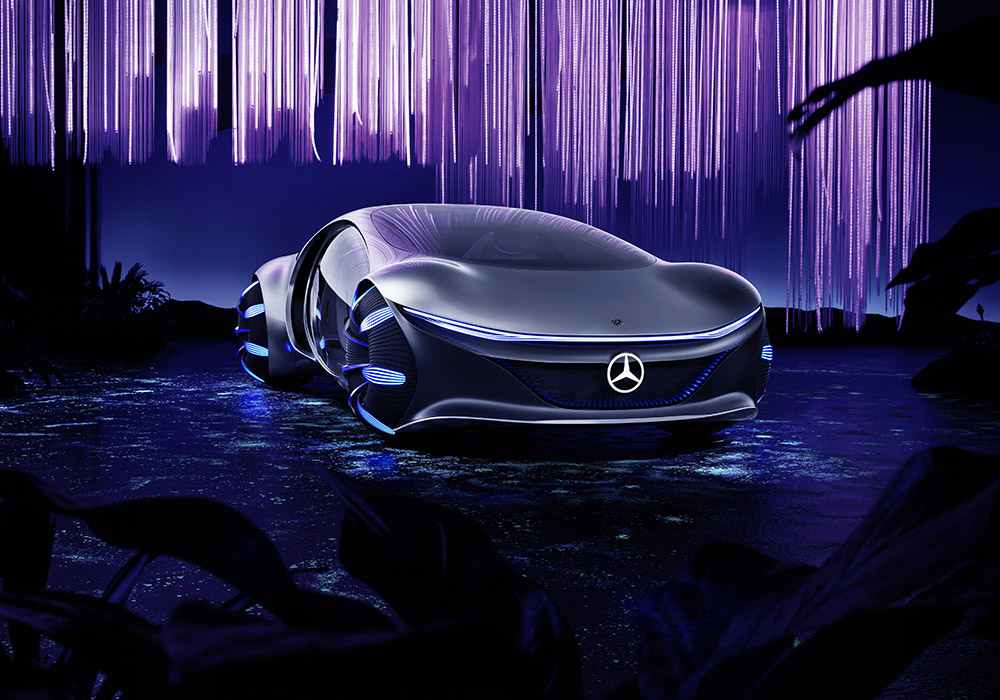 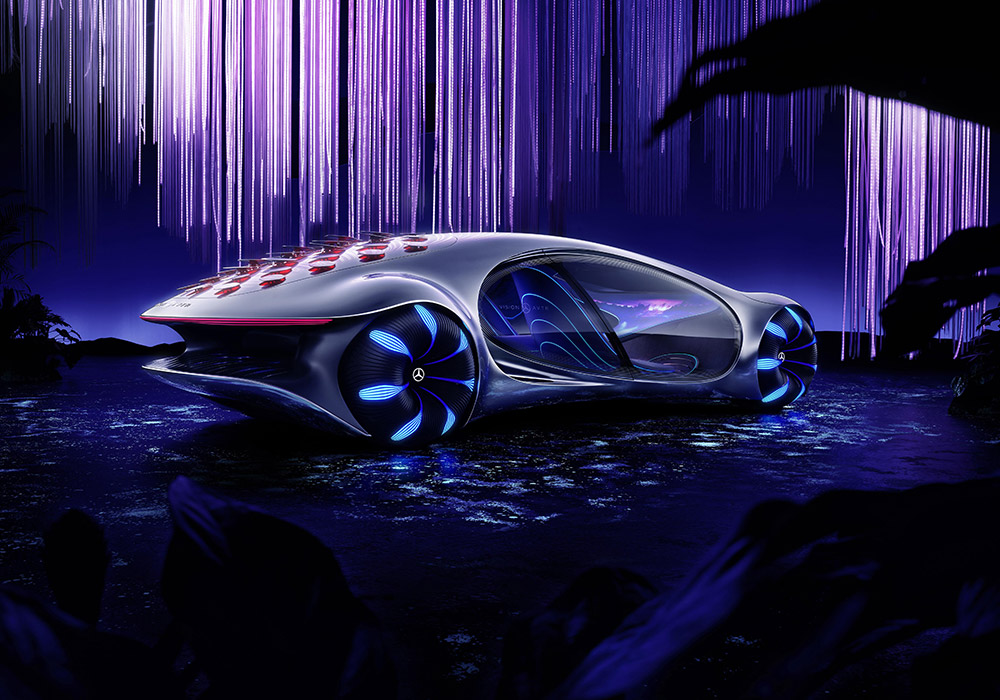 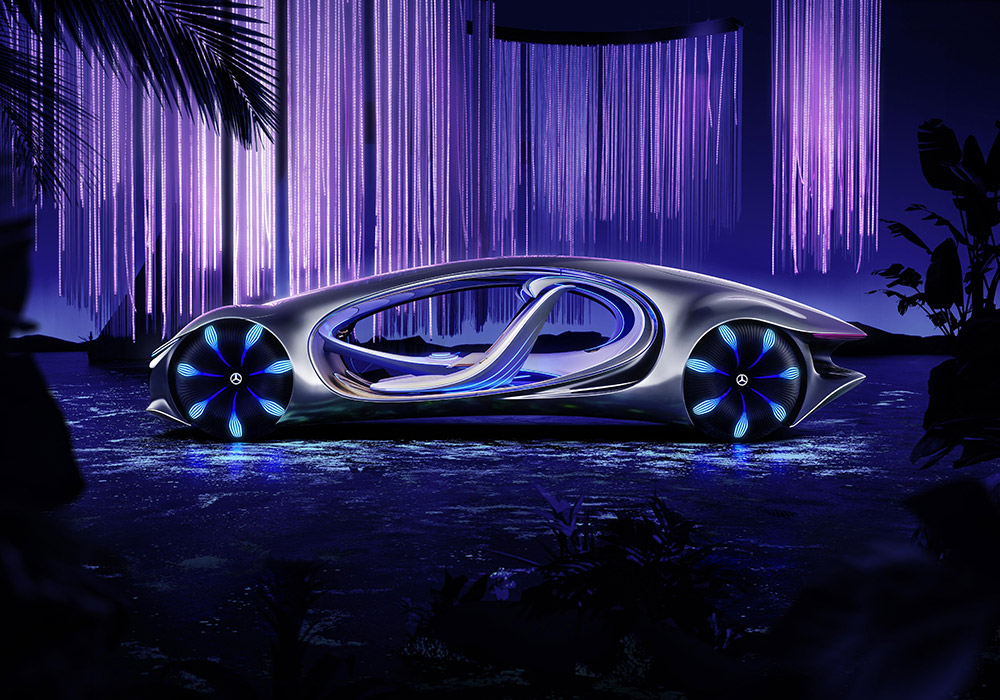 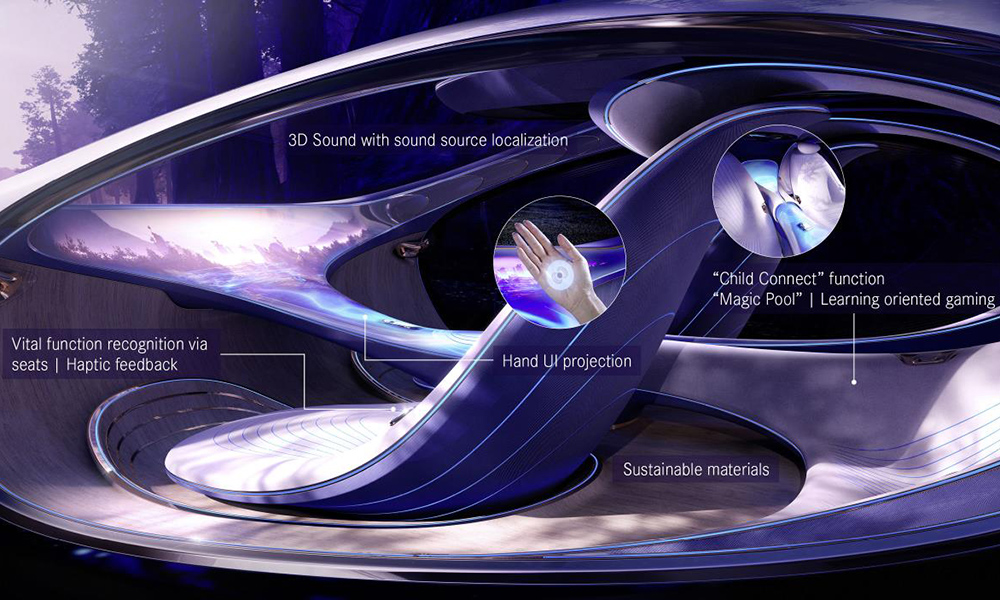 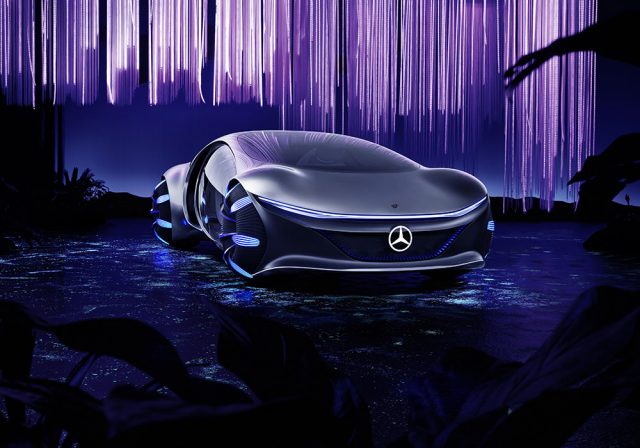 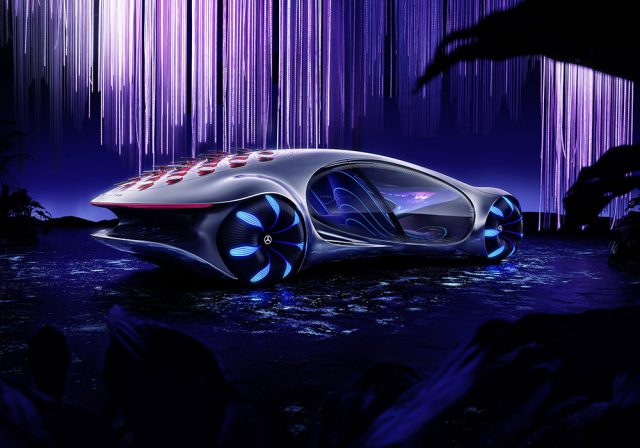 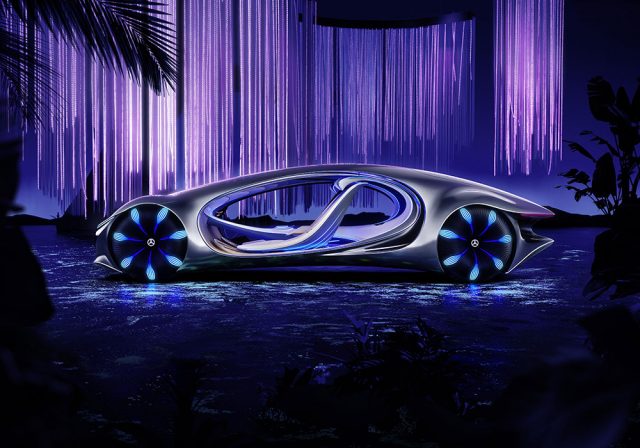 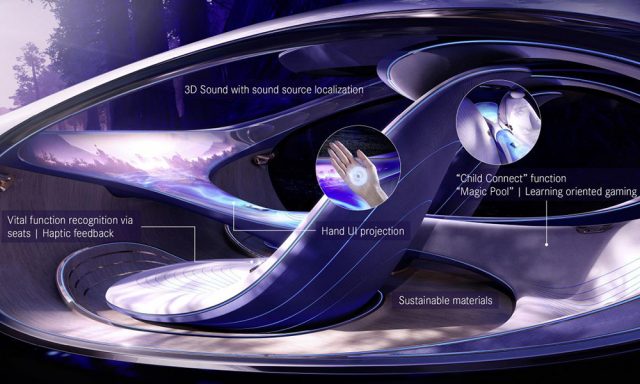 That's right, Sony has made a car. The Vision S is an embodiment of Sony's apparent commitment to realizing a world full of autonomous cars.

Now, you might be thinking, what could Sony — a company that makes PlayStations, TVs and phones — possibly offer the car world? Quite a lot, apparently. Sony has a lot of experience in displays, cameras, and AI, all of which are used in the Vision S. The concept car has advanced time-of-flight and imaging sensors (33 in total) which give it a better sense of what's going on around it. Based on all this information, the AI can decide what the car should do.

What's more, Sony reckons its experience in home entertainment should give the Vision S an in-cabin experience like no other car. The company's “360 Reality Audio” tech (no, us neither) will provide a “deep and immersive” audio experience through speakers built into each of the car's seats. Plus, in the front, there's a vast panoramic display which can be used to control all the in-car entertainment, as well as functioning as a display to keep the front passenger occupied.

Will it get made? Again, probably not. However, we'll almost definitely see Sony touting its wares in the in-car entertainment industry. 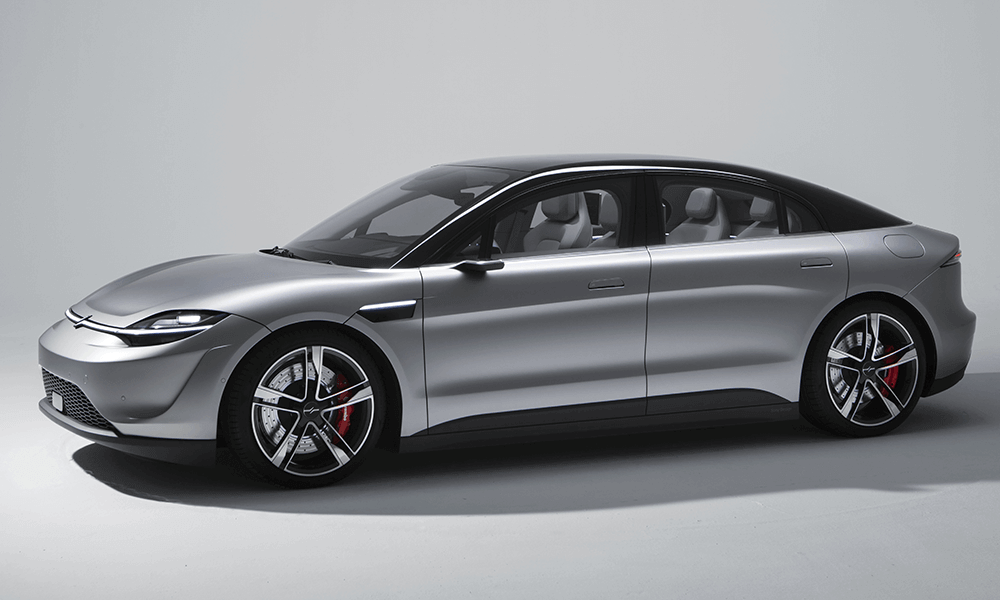 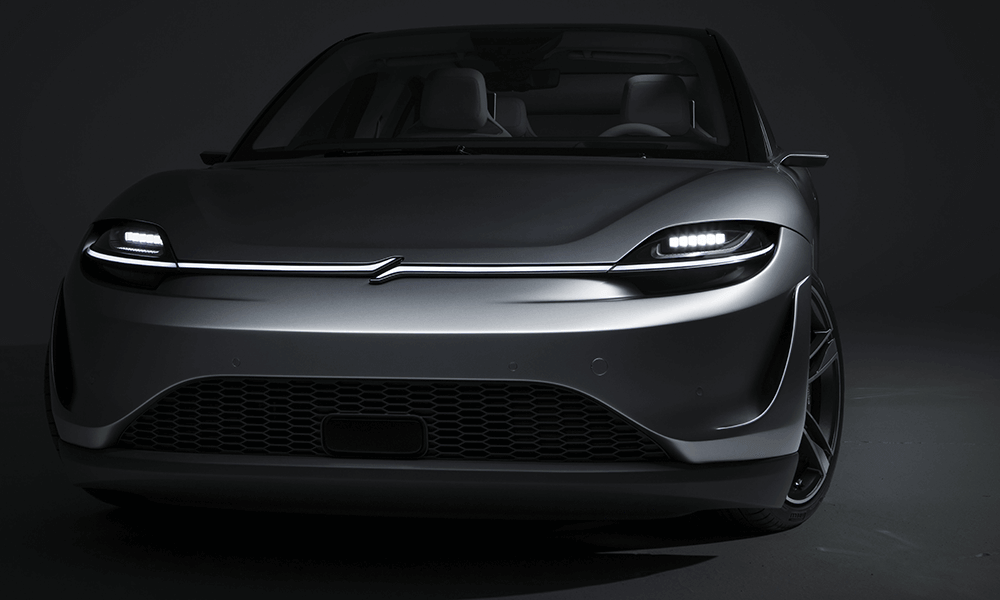 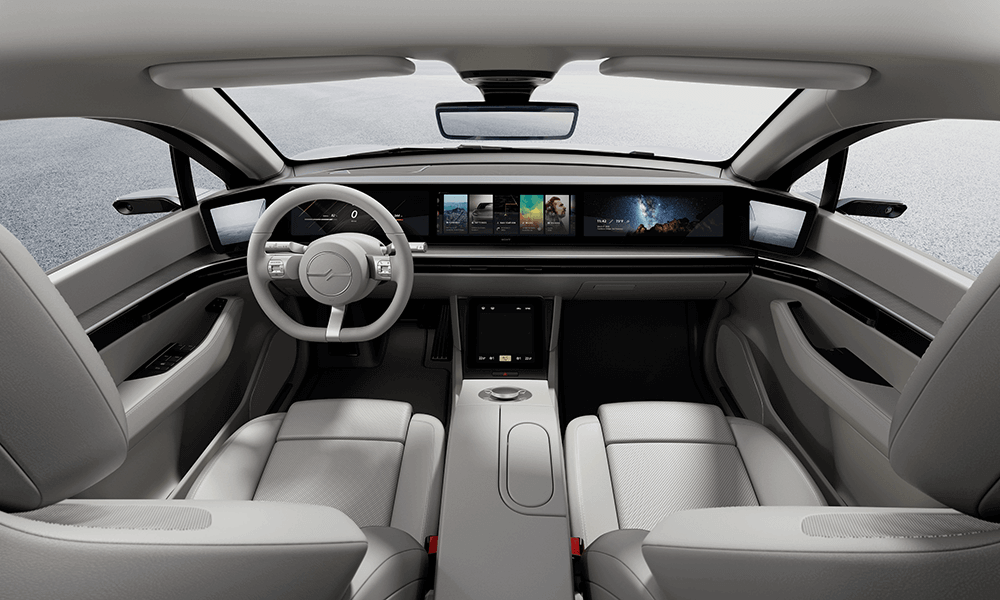 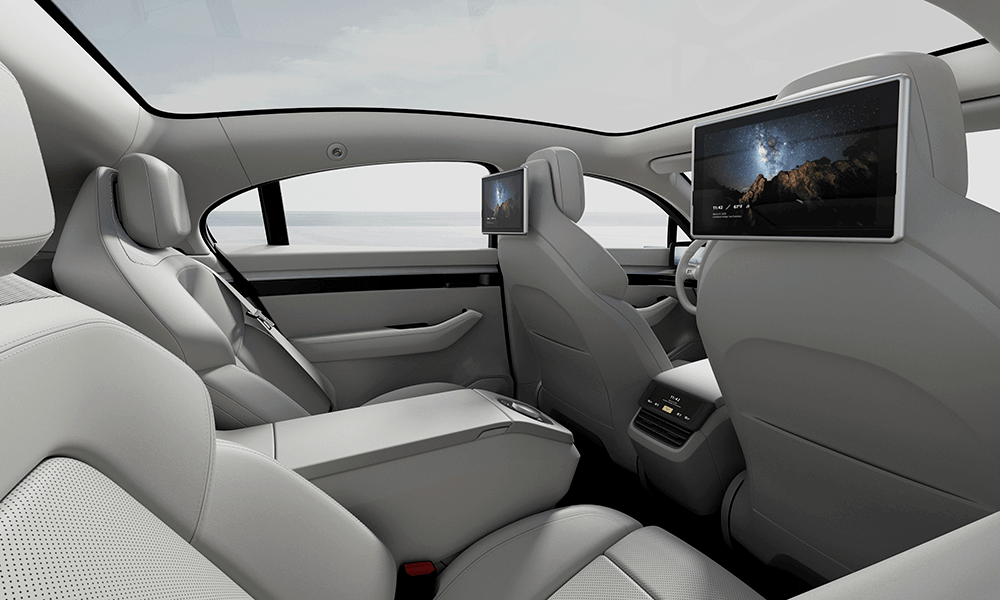 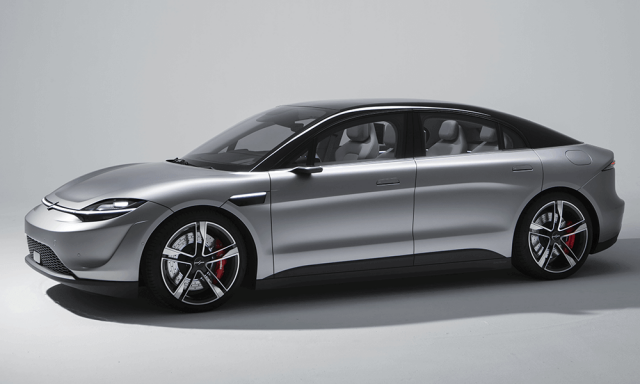 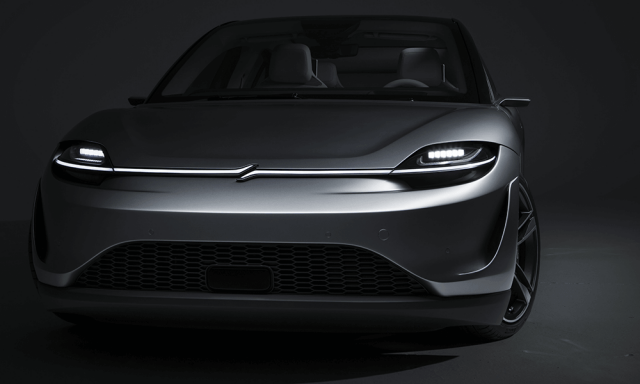 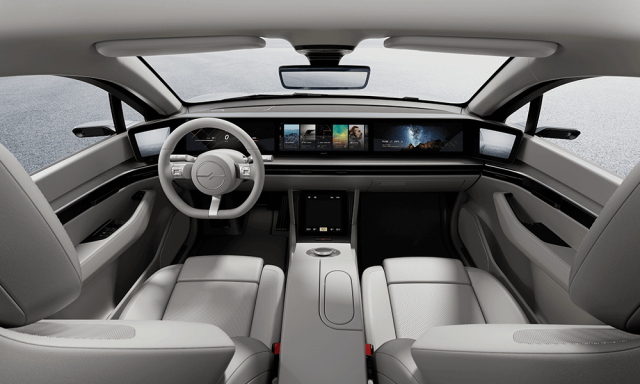 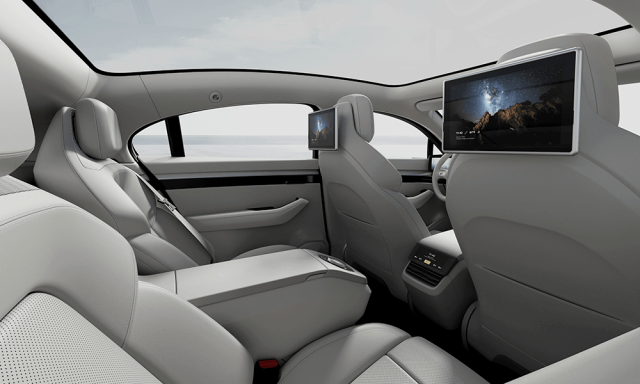 Back to regular car manufacturers now, but we're still some way off talking about regular cars. Honda's Augmented Driving Concept (we'll call it the ADC to save time) ticks all the regular concept car boxes — huge wheels, lack of roof, retro-futuristic design, and completely impractical controls. The ADC, for example, eschews regular pedals in favor of a steering wheel that controls acceleration and deceleration through telescoping in-and-out of the centre console.

However, Honda doesn't plan on people actually driving the car very often. “In the autonomous future,” the ADC's press release reads, “Honda believes that customers will be able to enjoy mobility in new ways when freed from the responsibility of driving.” To help us envisage the new ways we'll enjoy driving, Honda has provided a handy little infographic which, it has to be said, doesn't really make anything clearer.

ADC will also feature a “seamless transition” between autonomous to semi-autonomous driving thanks to various sensors which “continuously read the user's intention” to switch between the modes.

Still, the ADC does look quite cool with its roofless, sports car-like design. We're just not sold on Honda's promise of augmented driving.

Will it get made? Again, no. In fact, we can't really see much from the ADC making it into any production cars at the moment. Which is a shame, really, as it would be cool to see a sporty little Honda again. 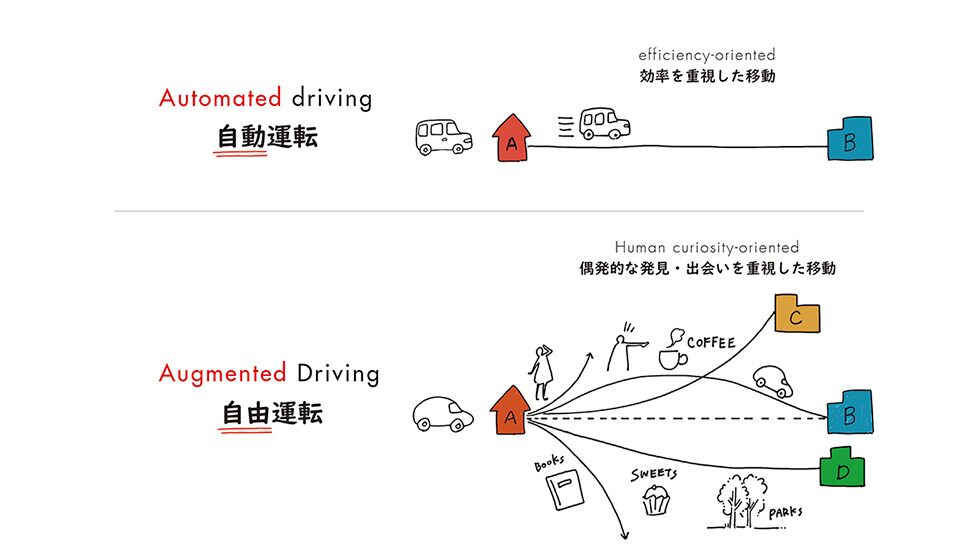 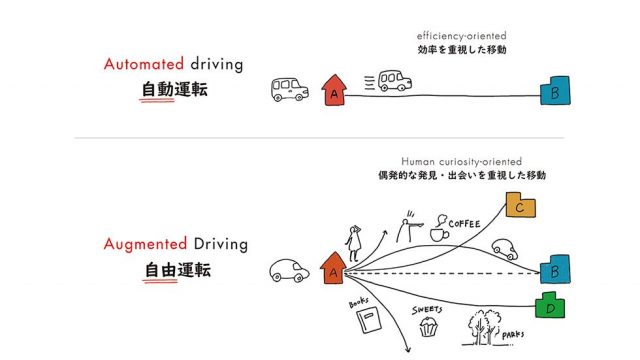 2020 is proving to be a year of surprises already, but one thing we definitely didn't expect was Lamborghini partnering with Amazon to offer in-car voice controls.

Yep, your $180,000 Lamborghini Huracan EVO will now come with Alexa voice controls. This, apparently, will make it easier to turn the heating up when you're flying along at 200mph. It's also the first time that Alexa voice controls have been offered on a supercar — something that surprises nobody.

“Lamborghini is a future shaper,” said Stefano Domenicali, the company's chairman and CEO, “and connectivity enables our customers to focus on the driving, thus enhancing their Lamborgini experience.” Being able to focus on the driving is a good thing, given that the Huracan EVO can accelerate from 0-60mph in less than three seconds, and hit 125mph in under ten.

Alexa's functions won't just be limited to in-car operations, however. You'll also be able to set the temperature in your mansion with Alexa, as well as open the gates to your vast driveway before you pull up — saving you the ignominy of having to press a buzzer.

Will it get built? You can buy one now. Well, you can't, but someone richer than you can and probably already has.

Hyundai Wants to Get Rid of the Car Entirely

Strange one, this. Car manufacturer Hyundai has decided that it would show off a joint conception of a carl-less future with Uber at CES this year. A strange decision given that, you know, Hyundai makes cars.

Anyway, in Hyundai and Uber's future world, cars will be a thing of the past. Instead we'll make long journeys in ride-sharing helicopter-cum-plane things. Hyundai and Uber's is called the S-A1, which takes off vertically from ‘Hubs.' These Hubs stay on the ground and serve as docking stations for ‘Purpose Built Vehicles' (PBVs, for short). PBVs are “eco-friendly urban vehicles” which offer “customized services in transit (i.e. coffee shop, medical clinic).” Clearly, in the future, we will never be safe from consumer capitalism.

CES visitors can take a look at a mock-up of the 180mph S-A1 in all its glory. Uber hopes to be get a flying ride-sharing service up-and-running by 2023, though that date seems optimistic to us.

There is some good news, however. The Hubs “create new communities by combining multiple PBVs” and will serve as a new “concept solution in which people can come together to interact.” Here at Tech.co, we could not be less excited for Hyundai and Uber's conception of the future.

Will it get built? The car, maybe. The communities, hopefully not. 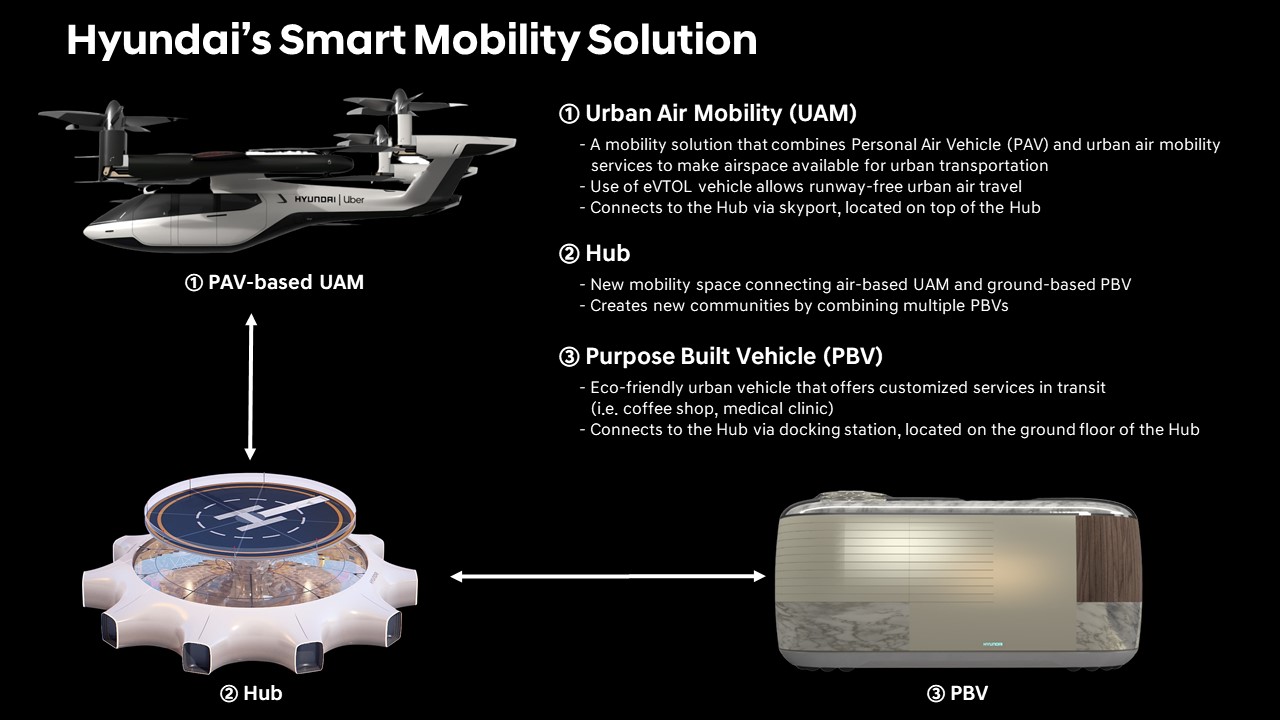 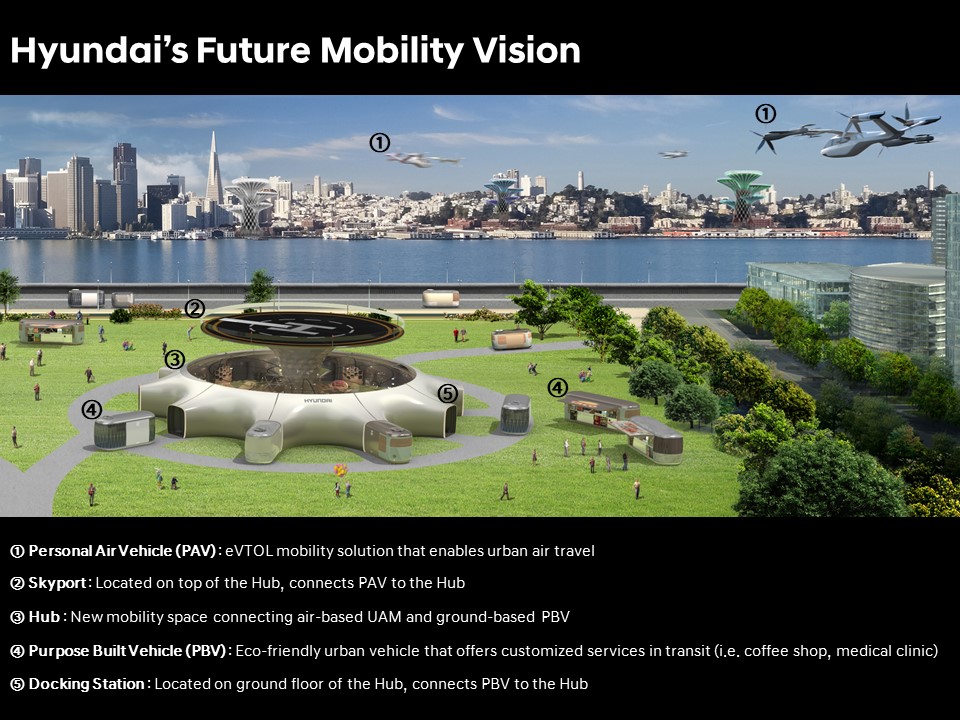 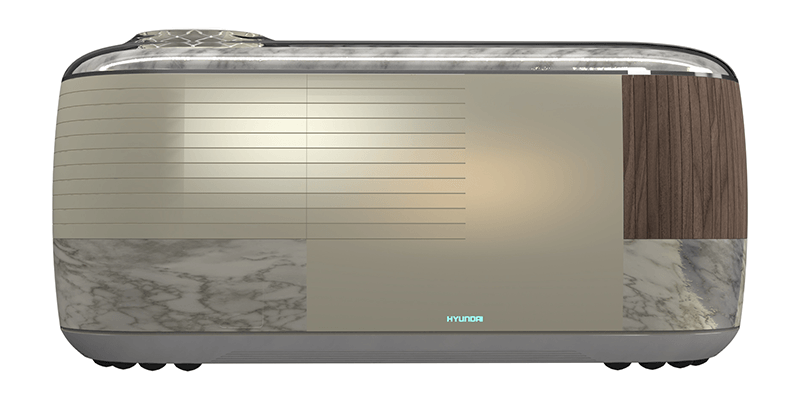 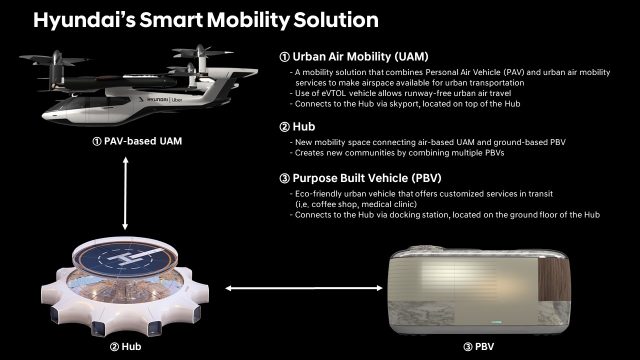 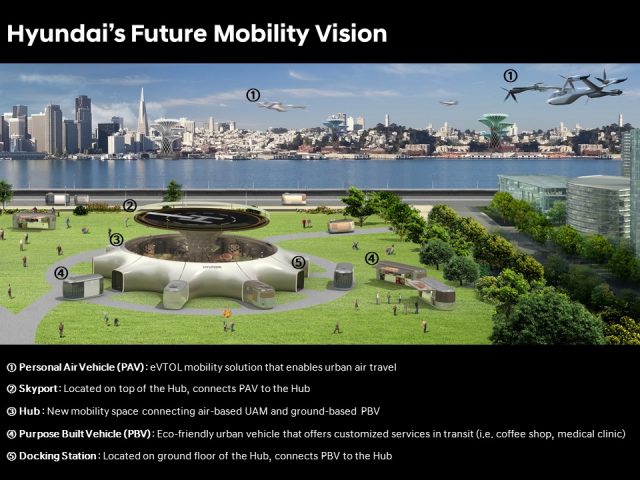 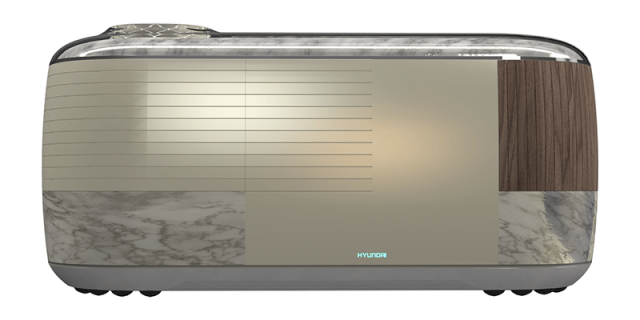