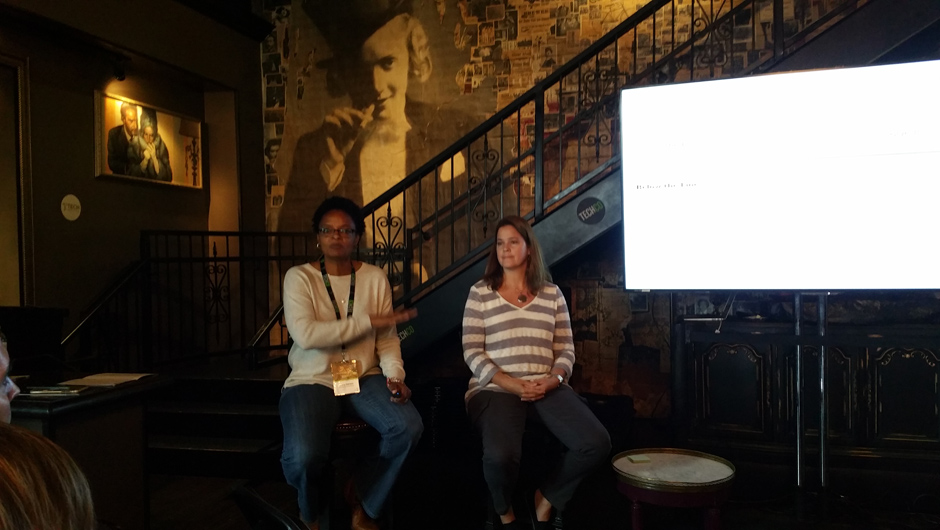 With the afternoon of our Monday Celebrate schedule winding down, we heard from Stacy Parson and Susan Cooney about achieving next level results for startup companies. Specifically, their session focused on teams and talent, and removing friction that gets in the way of accelerated performance.

Everybody who showed up learned a lot about feedback resilience, self-calibration, and how to create shifts in performance, influence, and relationships while simultaneously maintaining momentum. It's incredibly important that entrepreneurs learn how to deliver on intended results while building teams that exhibit both high productivity and high positivity.

You see, entrepreneurs need help navigating choppy waters sometimes while they try to build better, more efficient teams and startups. Parson gets brought into companies when they have potential problems in this regard: maybe they've gotten into a place where they didn't pay enough attention to culture from the start and didn't optimize for it.

Cooney and Parson fully admit that the content of the presentation isn't revolutionary or new, but it's something you have to evaluate and figure out – are you actually doing it? To that end, they opened on an interesting question: how do we address emotions and behaviors that slow us down? As a leader, are you creating a culture at your company that allows you to walk away and not worry that the wheels will fall off?

“We think we should all get along together, but it’s a miracle that we do at all. 75 percent of the people we meet are different from us, so when we find somebody we get along with we think it’s the norm, but that’s the exception,” says Parson. “In that light, conflicts and friction aren’t a big deal, it just is. That’s the human condition, and you can calibrate a solution for the problem versus assuming something is wrong with the relationship. It’s not personal. We’re human, it’s going to happen.”

The duo walked us through four different aspects of the framework:

Most entrepreneurs are in a scenario where what they're doing everyday isn't enough. It's either because the market says that, or your internal expectations say it. Regardless, you need to do more than you did yesterday or the day before. The question is how do you do it in a way that doesn't exhaust you?

Almost every point where you're stuck or slow has to do with peoples' ability to execute on a strategy. Difference of opinion on said strategy can slow you down, or perhaps somebody takes a chance on something innovative and gets it wrong. It all creates friction, and if you don't raise awareness of that friction you'll essentially be flooring the gas pedal while simultaneously hammering the brakes down. That is, if you're aware of friction points, and you know how to reduce it, you can move faster with the same amount of effort. That's what helps you get to the next level of wherever you're heading.

Alignment is one of the places where a lot of friction often occurs. Parson highlighted a four layer pyramid that includes experiences, beliefs, actions, and results, going from the bottom up. If your specific strategy is attuned for bigger shifts, you'll want to focus more on the bottom layers of the pyramid in experiences and beliefs. Alternatively, if you're chasing incremental changes, you'll want to pay attention to the higher tiers in actions and results.

The important thing to remember with all of this is that every action will get you a results. You need to press yourself and your company to ask: is this the intended result? As a leader, you want to focus on what your specific, intended result is and how you can best communicate it to others.

Above the Line / Below the Line

Just as every action will yield a result, every action also presents an opportunity for conflict or friction to arise. If you can maintain a specific focus on defined results, you're effectively seeing the issue, owning it, solving it, and implementing strategy. That, according to Parson, is what leadership looks like in this model and that's what is called being “above the line”.

The other end of the spectrum, being “below the line” isn't necessarily a bad thing, and it's actually quite natural. Entrepreneurs especially are familiar with this “below the line” lifestyle simply because they're constantly attempting new things and stepping outside of their comfort zones. You can also see how this applies to people outside of the entrepreneurial world as well.

Interestingly enough, most of our “below the line” actions are subconscious – about 90 percent of the time we're below the line but not aware of it. If you can get feedback, you can position yourself to stay above the line. Indicators that you're operating below are: covering your tail, being passive aggressive, not choosing actions, ignoring and denying, finger pointing, waiting and seeing, controlling versus managing, not knowing what to do, being confused, and asking people to tell you what to do.

Parson pointed out that there are two dimensions to effectiveness: productivity and positivity. People tend to toss out positivity and highlight productivity because they think productivity is measureable. However, it's no more quantifiable than positivity: we still have to use our gut and make decisions not always based on hard data.

If you can pay attention to both dimensions at once, you can get places and reach goals faster while also sustaining effectiveness over time. People need to be recharged and praised when they burst through tough challenges, and not giving enough on either end of the spectrum leads to burnout and, far worse, check out.