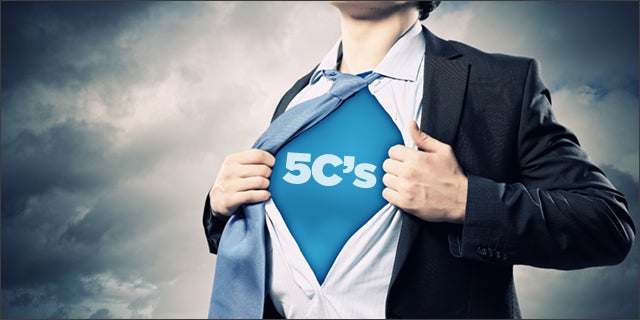 Recently, I was reviewing candidate requirements with one of my clients, the chief revenue officer of a well-known data management company. One of the requirements for this senior leadership position was “executive comportment.” I loved the phrase, as it succinctly captured that qualitative X factor marking those leaders who inspire the best in those around them.

But it got me thinking: what does it really mean, and how do you qualify for it? The following are the “five C’s” that I believe are the key ingredients defining executive comportment, and they can be useful when looking for cofounders and other team leaders.

In body language and communication, the individual exudes a belief in himself, justified by past performance. This is not to be confused with cockiness, which I equate with an almost delusional sense of worth based on entitlement. The former is the kid who won MVP for hitting the game winner; the latter thinks he’s an all-star because he has a participation trophy. Look for leaders with specific, measurable accomplishments. Pass on those who can’t produce any or who rely on excuses.

Composure is built on the pillars of confidence, experience, and planning. A belief in one’s abilities, combined with a “been there, done that” attitude and the foresight to anticipate a variety of potential scenarios, conveys an ability to remain cool in the face of company challenges, whether minor or existential. Ask your candidate to tell a story about a difficult challenge she faced and how she overcame it. Ask how she plans to meet long-term and short-term goals.

Civility is an underused term and, sadly, an increasingly uncommon trait. But those with executive comportment treat people with dignity and respect. They are polite and use business-appropriate language. That doesn’t mean they’re formal or stiff, though. Ask yourself, would your mom like this person? If they answer is yes, chances are good they’ll pass the civility test with your employees, partners, and customers.

In setting expectations for subordinates and managing upward to prevent surprises to management, a good leader communicates clearly and regularly. Your candidate should have a strong bias toward managing against metrics in order to accomplish the above. Ask how they go about setting and meeting those expectations. If it sounds loose, there’s a risk they’ll set their team, department, or company adrift.

“Be brief and be seated” is old but valuable advice for public speaking. When I talk with candidates, a big red flag is hoisted when the person sounds like they’re putting their feet on the desk to settle into a long conversation with me. I want to talk to people who have other things they want to accomplish today – after a brief exchange of pleasantries, we get to the point, make a decision, and move on to the next task at hand. We’re not rude to each other; rather, it’s a sign of mutual respect for time.

How about you? How would you define executive comportment?