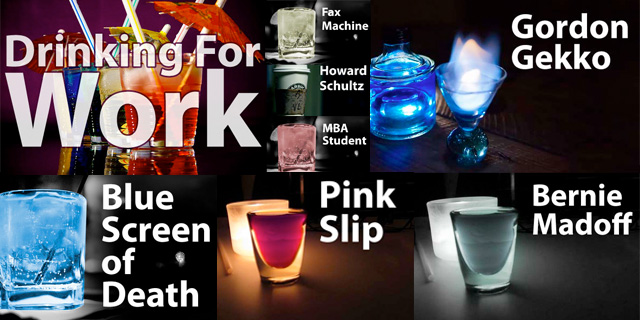 Tech Cocktail loves a startup that has a sense of humor. What better way to grab people's attention and expose a bit of personality? That's why this blog post from LA-based BetterWorks caught our eye (we also have a special affinity for a well crafted cocktail…). The startup service that provides employee perks for small and medium sized businesses created some special recipes geared towards that special drinking-in-the-office occasion… the question is, which is your particular poison? Here are the recipes re-published with permission from that crafty BetterWorks team.

Alcoholic drinks are named after many themes, from certain beach activities to strange old hoaxes.  But underrepresented in the cocktail world are office-themed drinks. And while there is a church (work) and state (everywhere else) libation division, the occasional office party needs its cocktail canon clarified. Here to fix the problem are nine office-appropriate original cocktail and shot recipes.

The “Blue Screen of Death”
A sharp, pungent, and unwelcome cocktail traditionally served spontaneously and in totally inappropriate situations.

The “Fax Machine”
An arcane, difficult, and ultimately-unsatisfying cocktail for people who honestly believe they were better-off before email.

The “Howard Schultz”
Named after the Starbucks CEO, the Howard Schultz is inspired by the brand's popular line of coffee-flavored desserts.

The “Pink Slip”
An office favorite. Due to the discomfort involved in consuming the beverage, the Pink Slip is seldom served twice.

The “Gordon Gekko”
An obscenely expensive and wholly-unnecessary cocktail reserved for the ultra-wealthy.

The “Keurig”
Named after the brand of office coffee makers which the drink requires, this is a playful early-morning drink that begs to be shared.

The “Madoff”
An tricky, unethical beverage best-suited for large gatherings.

The “Tony Hayward”
An embarrassing cocktail best consumed quickly before anyone sees you.

The “M.B.A. Student”
An overrated cocktail that you're probably better-off not making at all.