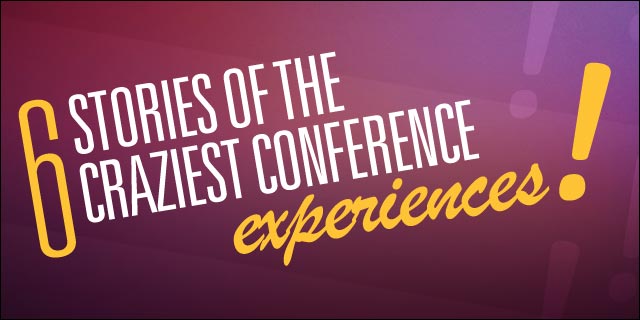 Whether it's for work or for fun, going to conferences can oftentimes be hit-or-miss experiences. Hopefully, many of you have had the luxury of attending conferences of your own volition, therefore really only going when you are interested in the topic or the overall theme of whatever conference you attend. Even in those cases, however, many conferences can leave only a small imprint in your memories as to what actually went down while you were there.

When I think about my own experiences at conferences, the ones that really stick out to me are the ones which involved truly memorable experiences. And for a few of those, such experiences involved some crazy moments and encounters that I will never forget. (At one nonprofit conference I attended, Britney Spears made a surprise appearance – which, when you're a gay man working in a traditionally mundane field, is a wholly unexpected and preposterous occurrence).

We put out an open call for some of the craziest conference experiences that other people have had, and we've managed to hone it down to the 6 stories below:

“Last year our company was at a Legal Technology Conference in New York when our liaison for the conference rounded everyone up on a bus and shuttled us to an East Side heliport. We all were truly amazed that there was a full court open buffet and open bar on the grounds, when we arrived, and everyone was given a VIP ticket for a full hour helicopter tour ride around Manhattan. It truly was a memorable experience that I will never ever forget.” – Gerry Rosen, CIO, SV Media Corporation

A Private Show from the Girl on Fire

“Meeting Lewis Hamilton at the BlackBerry World Conference in Orlando and the private performance from Alicia Keys that followed in the evening in Universal Studios (which was closed solely for BlackBerry). Those were good times!” – George Burgess, Founder & CEO of Gojimo

“Very late one weeknight during the Consumer Electronics Show, I found myself well off the strip in what looked like a nondescript warehouse from the outside but was actually the Ultimate Fighting Championship training gym. Monster's CEO Noel Lee was hosting the party and had brought in a winner of the reality show ‘The Voice' as entertainment. Something about the mix of a CEO driving around on a gold Segway, a reality show winner singing his best Cyndi Lauper covers in a UFC caged octagon and mixed martial arts experts mixing in with the crowd was particularly an ‘only in Vegas' moment.” – Brian Selander, Executive Vice President at The Whistle

“I make video games and was at the Game Developers' Conference (GDC) in San Francisco in 2008…I left [a meeting] as politely as I could and dashed to the men's room. My head swam as I tried to remember my plan for the next meeting…I'm sure I was muttering to myself as I washed my hands. In the sink next to me was Shigeru Miayamoto. Creator of Mario. Creator of Zelda. Video game royalty. My Japanese isn't so bad, so I told him I'm a big fan. We walked out together and made small talk. I asked if he'd had our San Francisco local delicacy: a burrito. He pointed out that it's really a Mexican thing. I mentioned that it's really only well known in the US, and if you were to tell a guy in Guadalajara that you wanted to eat a little donkey he'd look at you funny. He chuckled. I didn't want to talk about my surfing game with to somebody listening out of politeness. I didn't linger. I didn't snap a selfie. I didn't even exchange cards. So my brush with greatness ended.” – Trevor Stricker, President of Disco Pixel

Two U.S. Presidents and a Wedding

“I had a group of approximately 100 health care professionals staying at the Four Seasons in Houston, Texas. Also staying there was a member of the Saudi royal family and his entire entourage. The sales team at the Four Seasons had already made me aware of this and I knew that this meant a heightened level of security, which I did not believe to be an issue since my attendees would spend most of their time in the ballroom in meetings. The meeting was scheduled to conclude on Sunday and everything was on track. I became aware mid-afternoon on Saturday of a society wedding reception that night. This still didn't cause me to stop and have any concerns, until I found out that the bride was the daughter of a political mover and shaker. In the midst of a high-level pharmaceutical meeting, and a wedding reception, there were no less than former Presidents George H. W. Bush and Bill Clinton attending, as well as former Secretary of State James Baker. It was literally a secret service and security free-for-all. My attendees loved it – they staged themselves in the lobby and declared it to be the best people watching they had ever experienced.” – Glenna Fulks, Assistant Director, Corporate Events of the Advertising Specialty Institute

Monkey Pic or It Didn't Happen 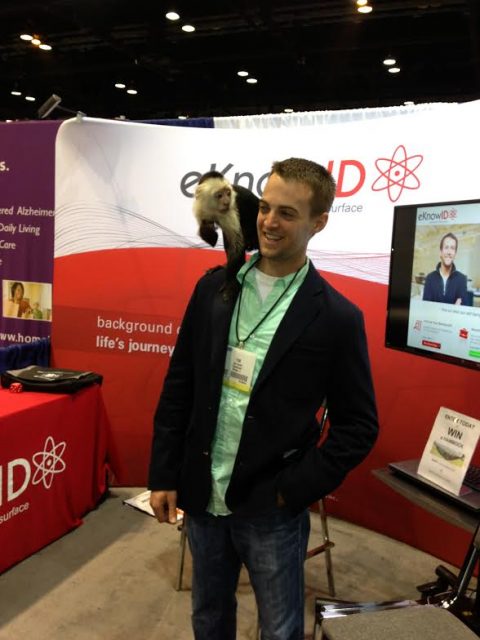 “At a SHRM conference last year, the company next to us had a live monkey as part of their exhibit. Their tagline was ‘get the monkey off your back!' The monkey attracted a lot of attention for the company and everyone wanted to take a picture with it, but live animals are unpredictable and the monkey became restless and fidgety after a long day working at the conference. It definitely made the day more fun though having a monkey across the walkway!” – Erin Wasson, VP of Marketing at UrbanBound

Bonus: The One with the Llamas 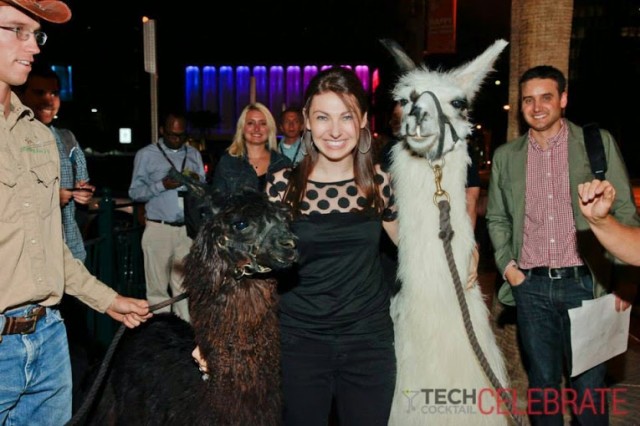 At last year's Tech Cocktail Celebrate, we had llamas! Wondering what surprises we have in store for this year's Celebrate? You'll have to join us and find out!

On October 6-7, Tech Cocktail Celebrate will gather hundreds of attendees, industry leaders, and inspiring speakers in downtown Vegas. Meet the hottest startups and investors from around the country, learn and collaborate with others turning their communities into startup cities, and enjoy music, parties and llama spotting. Grab your tickets here.