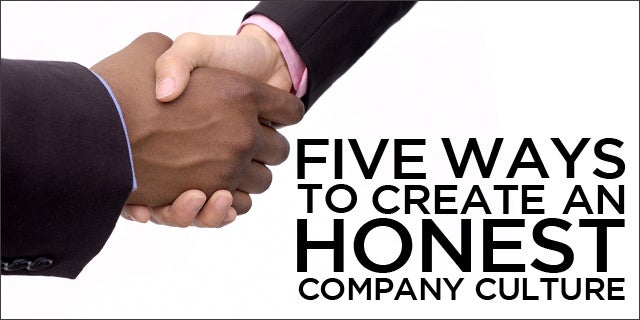 Recently, we wrote about how “an honest company culture could make your startup more productive.” Having reliable information about how every part of the company is doing helps you learn faster and plan better, not to mention have happier employees.

But how do you create a company culture of honesty? It’s up to the founders, and it’s best to start early.

If you hire dishonest people, your company culture will be dishonest by default. So place a high value on honesty in your job candidates.

“You cannot train a person to be honest, but you can train them to do a job. I have always said that my criteria for hiring are 80 percent character, 10 percent skills and track record, and 10 percent industry knowledge,” says Jeff Hunt, founder and CEO of Snap36.

To figure out if someone is honest, use your observation skills. Do any of their resume items seem exaggerated? Ask about them, and watch their response. The book Liespotting identifies a variety of signs of dishonesty: a frozen upper body, placing a barrier between you and your interlocutor, repeated touching of the mouth or eyes, fake smiles (where the eyes don’t crinkle), and gestures that don’t coincide with words (e.g., shaking the head no when saying something affirmative).

Instead of issuing an ultimatum for honesty, try to explain why it’s valuable and make employees want to be honest. Explain that keeping secrets makes problems and mistakes stick around longer. It can delay schedules, which means disappointing partners and investors. And it means you can’t trust the words coming out of your coworkers’ mouths, which is frustrating and paralyzing.

To show you’re serious, put honesty in your mission statement or handbook.

A culture where everyone is sharing feedback, improving, and moving quickly past mistakes is a more productive one. To create it, lead by example and ask for ideas and critiques. Set up individual meetings with your team leaders specifically to hear their updates and thoughts.

In the same vein, give candid feedback to your team – not harsh, but in the spirit of helping everyone get better. And encourage employees to do the same for each other, as they do at Mindvalley.

“A corporate culture where people feel comfortable making honest critiques of anyone's work allows you to create better products. Nothing should be above reproach, not your site design, CEO's ideas, or even your business model,” says Greg Smith, cofounder and CEO of Thinkific.

To facilitate this, Smith has someone other than the CEO run brainstorming meetings. For some reason, people feel more comfortable being honest when they’re not talking directly to the head honcho.

And expect honest feedback from investors, too. “Recently, I have seen some equity investors who make this one of their key principles – not mincing words and not tolerating ‘spin,’ for the good of the relationship and the best ROI,” says Nancy K. Eberhardt, CEO of Pathwise Partners.

If you don’t share updates about your company’s progress, employees can easily suspect that you’re hiding something – especially at a startup, where the long-term survival of the company is sometimes in question.

As one of its core values, Zappos commits to “build open and honest relationships with communication.” Part of that involves a quarterly all-hands meeting, where employees hear from executives about the state of the company and get entertained by guest speakers and fun videos.

A simple weekly or monthly meeting like this can keep the questions and doubts at bay.

“I also encourage employees to ask anonymous questions during company meetings, which I always answer on the spot,” says Gregg Smith, CEO of KoolSpan. “It’s hard to make something up on the spot so employees know that my answers are genuine.”

If you’re more of a behavioral economics type, make sure to put the right incentives in place. Most importantly, don’t punish employees for their honesty about a problem or mistake.

“If a piece of software doesn't work right, I want to know about it. I don't want to find out about it from an end user or a client; that's the worst. Rather than chewing out the person who brought the problem to my attention, you have to focus on how to fix the problem,” says Sean Casto, CEO of PreApps.

On the other hand, make sure to check employee reports and don’t tolerate any number-fudging or dishonesty. Little things like this convey that the company doesn’t value honesty and can lead to more serious indiscretions.

Finally, giving equity to employees can be a good way to align their incentives with the company’s.

“If employees are only motivated by money (salary), then they are motivated to hide the truth in order to seek approval, promotion opportunities, bonuses, and ultimately financial gain. But when you give them equity in the company, you find they become much more honest about their own and others’ performance. Their motives shift from financial gain alone, to genuine concern for the success of the company,” says Dr. Brent Coker of Webreep.

And that is the ultimate goal of an honest company culture. It won’t always be easy – there may be painful realizations or awkward moments – but you get a boost in productivity and the plain and simple refreshingness of honest communication.