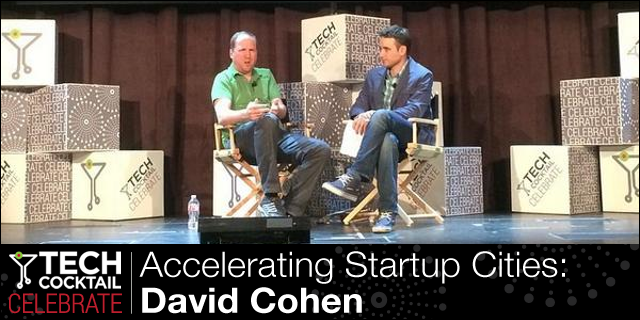 Before we wrapped up the day 1 sessions at Tech Cocktail's Celebrate Conference and headed over to Place on 7th for the National Startup Showcase & Mixer, Frank Gruber sat down with David Cohen for a fireside chat. And who better to talk accelerators with than the founder of Techstars? After a quick ditty on his ukulele, Gruber jumped right in.

A majority of the entrepreneurial community is aware of how TechStars got started in Boulder, Colorado, in 2007. It was always a great city, but Boulder desperately needed some help when it came to the entrepreneurial community, which existed primarily around storage and telecommunications. Not to mention Mobius VC was the only fund in the area, and you could count the number of angel investors on one hand.

“Lawyers and VCs are participants in a community, but the entrepreneurs are the leaders,” says Cohen. “The VCs will come specifically if there are good companies to invest in. Some might say there's nowhere near enough capital in Boulder, but I think the money is going to follow the interesting stuff.”

TechStars has constantly moved to the beat of their own drum, and one of the things they're doing differently now is their equity-back guarantee. Over the years they've seen some founders who are skeptical about the value of TechStars before doing the program. However, Cohen notes that these companies are never skeptical at the end of the program.

Cohen is also ensuring that they continually grow and expand the reach of the accelerator program. To date they've begun working with big corporations like Disney, Barclay's, and Nike and have opened an overseas office in London.

If that wasn't enough, TechStars has also recently implemented a quiet program called RisingStars, which expands tech startup opportunities to demographic groups that are currently underrepresented in the community. Cohen made an announcement to the entire audience today before he left the stage for all those who might be interested in the program.

“Talk to a TechStars mentor or founder to ask about this quiet program,” said Cohen. “Also, send me an email and I will help you out.”

And if you're attempting to get into an accelerator, Cohen wants everybody to know that it's all about quality versus quantity. A strong product execution is the best way to get noticed, whether that's via numerous early adopters or a successful early-stage product. He likens it to dating: “You don't just go ask everybody out at once, you focus your efforts.”