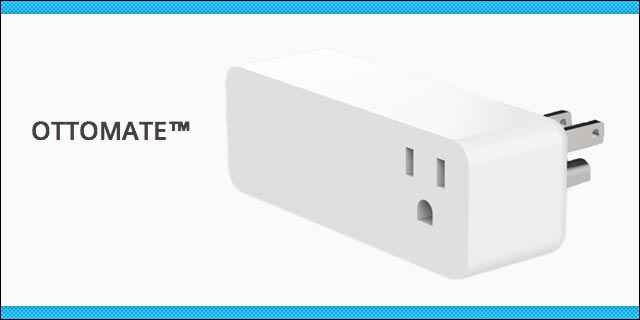 One night in May, Sami fell asleep with the lights on and woke up to his mother scolding him about wasting electricity. Instead of getting defensive like many teenagers might, he decided to do something about it.

Since then, he’s been teaching himself about programming, engineering, and electricity so he can build Ottomate, a gadget that lets you control your appliances and lights with your smartphone. You just plug them into Ottomate and plug Ottomate into the wall – or add it to your light switches – and voila.

Ottomate is a “smart” device, so it spends two weeks learning your preferences. If you start your coffee maker every morning at 7:30 am, it can learn this behavior and do it automatically. If you shut your lights off around 1 am – like Sami should have done in May – it can learn that, too. If you’re worried about leaving the stove on, it can turn off everything when you leave the house, detected by the GPS in your smartphone.

That’s where the energy savings comes in. Plus, when many of our devices are “off,” Sami says, they’re not really off. Ottomate cuts the electricity completely and, he estimates, can save you up to 75 percent on your energy bills.

Not many teenagers get excited about electricity and programming, but Sami had some inspiration. He learned Ruby on Rails with his mother, a serial entrepreneur who was teaching herself the programming language. She’s supported his idea, encouraged him when he couldn’t figure out a sticky algorithm, and introduced him to local startup celebrity Eric Koester as a mentor. Now, Sami says, she’s also teaching him how to write professional emails that don’t look like text messages.

As a freshman at Oakton High School, Sami took a technology class and learned about new innovations like 3D rendering. He spent that summer as an intern at the startup RUNIN Out. Even though he was just doing data entry, he was inspired by how hard the founder worked. And with all this worldly experience, you can’t blame him for preferring startup work to schoolwork.

“I enjoy this a lot more. In school, most of the stuff is just – the nicest way to say it is it’s just boring,” says Sami. The exception, of course, is his STEM class, where he learns about engineering, electronics, and building bridges.

Though regular school may be boring, Sami still has more to learn as a student of entrepreneurship. His biggest weakness, he admits, is getting tired and cranky when he stays up late hacking. But he’s ready for the challenges.

“I love being an entrepreneur,” he says. “I want to run Ottomate as long as I can.”