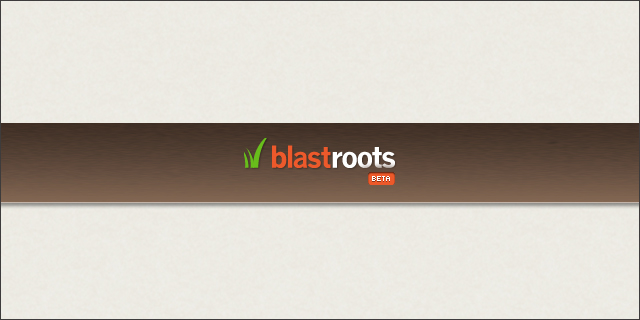 BlastRoots is a user-driven online political lobby campaign platform. They aim to bridge the gap between today's historically high dissatisfaction with government and historically low sense that government can be fixed.

Currently, the patent-pending platform is live in beta and deploys the user’s zip code and social networks to allow them to communicate directly with their elected officials and network contacts through multiple channels simultaneously. In brief, they’re crowdsourcing political advocacy, or perhaps better, democratizing democracy.

You can join an existing campaign, create a campaign, or “blast” information related to the issues you’re interested in. The ability to “blast” info is the heart of how the campaign platform works. It means you can email, post on Facebook, and tweet unified information on your networks simultaneously, as well as directly to your members of Congress.

The links blasted out by members of a campaign also lead their engaged audience back to the BlastRoots campaign, where they can see a unified effort, and find useful channels to take direct action.

The BlastRoots team comes together with experience in public advocacy and tech startups. Founder and CEO Christopher C. Hull is the former campaign manager of US public affairs at Hill & Knowlton, who has originated $10 million in advocacy business in the last decade. Cofounder and president John L. Merz is the former technology director of the AOL Greenhouse, its in-house startup incubator (Merz came out of retirement to join BlastRoots).

When I caught up with Hull, I wanted to know if they planned to allow users to follow a campaign without joining it, give and track their financial contributions through the platform, or add elements of gamification, all of which he said are part of the development plan. He also said that they plan to make this platform available for campaigns at the state and local level in all 50 state legislatures, which is not available anywhere else. “We think this is the most robust, free, online advocacy tool. We’re doing this because we truly believe BlastRoots can help fix politics.”

Their users are those who want to change policy – first those already working to do so, but eventually all those who want to but don't know how. They aim to enable small money donors in particular – those already giving money to candidates and causes – to invest resources directly in their own hot-button issues, bypassing intermediaries typically interposed between them.

BlastRoots believes campaigns run on their platform will give greater depth and color of sentiment, based on the unique content and greater potential breadth of user-driven campaigns. Politically, the team disagrees on just about everything, but agrees on this: government needs to change, and people need help to change it.

BlastRoots was a showcased startup at the Tech Cocktail DCWEEK mixer.

Guest author Kaitlynn Hendricks is a systems builder and a solution-focused, broad-scale economist. She works as a business developer in Washington, DC, whereby she spends her days pursuing, supporting and telling stories about ventures in development and stewardship of globally-conscious, locally-focused networks of human, physical, and liquid capital. She enjoys timeless and occasionally avant-garde fashion, reading things that are just a little bit too complicated to really understand, relentlessly challenging the status quo, and exploring the city on her vespa. You can follow her on Twitter @sophistikaty.