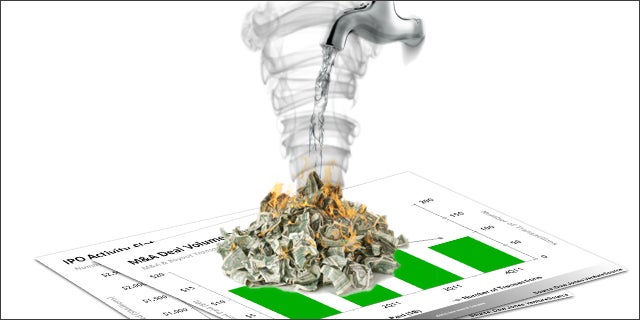 For anyone involved in the startup scene, you know that last year, VC activity was a little off.  Today, Dow Jones confirmed that – VC activity dropped by 14% compared to 2010 – an uphill climb for any entrepreneur who is exhausted and ready to cash out.

The news isn’t all bad, though.  The same companies that are enjoying lower costs to start up their venture can take advantage of that to stretch out their capital and attract larger acquisitions. The average price paid for an acquisition ($71 million in 2011) marks a 77% increase, while companies that were on average 5.3 years old raised an average of $17 million from VCs.

In 2011, 45 companies raised $5.4 billion via IPOs (in 2010, that figure was $3.3 billion), BUT that figure was affected by 2 gigantic IPOs – Groupon and Zynga – so take that number with a grain of salt before getting all excited.

Zoran Basich, editor of Dow Jones VentureWire, said that this year, “…we'll get a sense of whether the last two years of flat IPO activity is the new normal for the industry or if there's room to grow.”

What do you think?  Is last year’s activity signaling a new normal, or will 2012 be different?  Leave a comment below and share your thoughts.