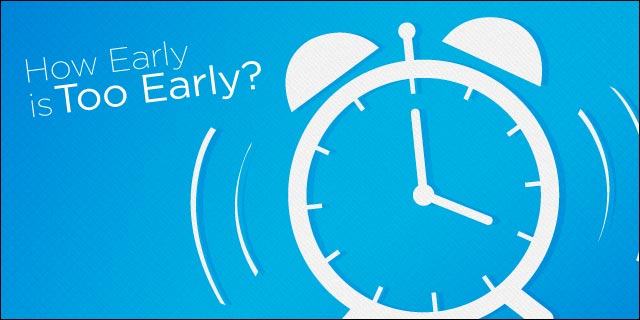 A major software company’s operating system consistently wins rave reviews from users for its ease of use. The company’s main competitor, believing it has a similar product ready to present a challenge, releases its new operating system — which is promptly lambasted for being clunky and less intuitive.

Sound familiar? It can happen to even the biggest companies — they rush to market without properly testing via focus groups and tarnish their reputation in the process.

This unfortunate plight is the conundrum all tech startups face: When should you begin selling your product?

The Benefits and Risks of Selling Early

Most tech companies waste too much time and money trying to perfect their products. If it’s viable, get it out there! Not doing so wastes a golden opportunity to make money, justify your business model, and grab market share.

Remember Twitter? It was terrible at first (think “fail whale”), but because it was the first to market, it became the dominant microblogging platform. Had Twitter waited to perfect its platform, another company may have grabbed the market leader position.

I’m not suggesting you rush to sell your product. Just as waiting too long can hurt your company, there are also several potential dangers in rushing to market.

Learning From the Past

Before Foursquare, there was Dodgeball, a mobile social platform. It came before iOS and Facebook, and its user interface wasn’t intuitive. Dodgeball was solid enough that Google acquired it, but the product never caught on because mobile technology wasn’t quite ready for it.

LoudCloud, a startup from Netscape founder Marc Andreessen, offered cloud storage to startups and large companies. While its service was essentially the same as we see today fromAmazon,Box, and others, the concept came to market too early and eventually changed gears to become Opsware.

My co-founder, Bill Jula, was involved with a professional reputation algorithm company, which worked much like the way Klout measures social influence. The idea was brilliant. The mistake came when, rather than continuing to offer the service for free, a premium was added for users who wanted reputation scoring verification. At that time, no one was willing to pay for this, so the business stagnated.

Companies likeReputation.com now offer a similar service — and charge for it — meaning my co-founder’s business was a great idea, but it had poor market timing and tried to sell too soon. Had he utilized focus groups effectively, he might have waited to release the service — and might have a thriving reputation scoring business now.

Testing your product on a small focus group or subset of your existing customer base provides great opportunities to test your product’s timing. Much like jurors, you should select the group carefully because its makeup plays a critical role in your decision-making. Here are five key questions to consider with your focus group:

Hitting the market early confers many advantages to a startup. You can get ahead of competitors, seize crucial market share, and possibly start making money sooner. On the other hand, there are many cautionary tales about companies that, for one reason or another, came too soon or simply flat-lined because of other bad decisions.

Learning from these examples and carefully examining feedback from your focus group will help you make pivotal decisions about when to release your product to maximize its return. After all, for tech startups, timing is everything.

Guest author Janis Krums is the founder and CEO ofOPPRTUNITY, a professional discovery platform that matches professionals based on real opportunities to do business. Janis is a serial entrepreneur, an advisor and an investor for startups. He can be reached onTwitter orGoogle+, or directly at janis@opprtunity.com.