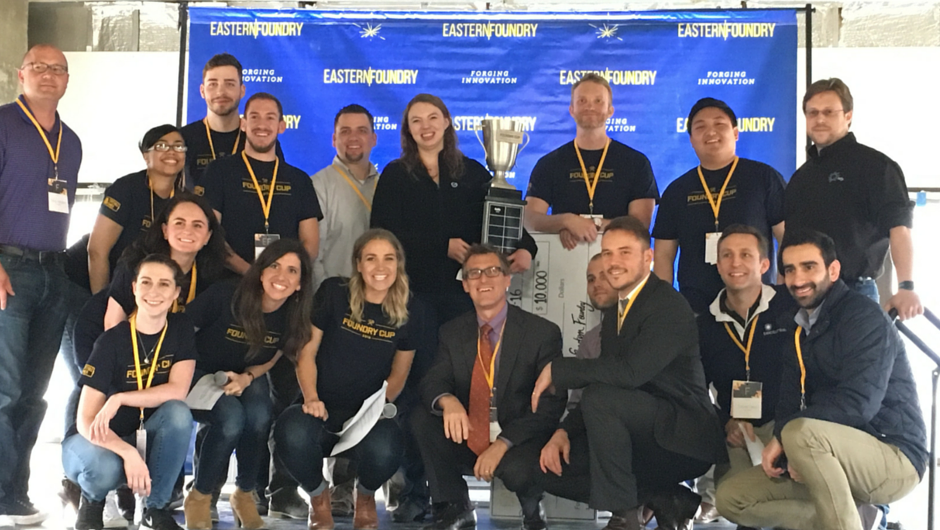 On Friday, Eastern Foundry hosted its second annual Foundry Cup. Seven finalists pitched to a panel of three judges for the grand prize of $10,000 and their name engraved on the official Foundry Cup trophy. An additional $1,000 was awarded to the Peoples' Choice winner.

Energy Intelligence – a company that has developed a road-mounted system that harnesses the kinetic energy of braking vehicles to generate electricity, saving high-traffic sites such as parking garages, distribution centers, and tollbooths up to 50 percent of their electric bill – went home with both the grand prize and the People's Choice award. The company currently has three patents, a tested product, and seven major facilities on board for commercial pilots in 2016. The grand prize was presented by last year's winner, Glen Coppersmith, CEO of Qntfy.

Eastern Foundry serves as an incubator and co-working space and offers services, trainings, and information to companies that are finding their way in the competitive world of government contracting. The theme of this year's competition was focused on portable power.

Innovative portable power solutions are a critical need for the government, and in turn the world, for people who work as first responders, in wilderness areas, or delivering aid to developing countries. One area of the government in which the need is the greatest is the military. Retired Lieutenant General Michael Barbero gave a keynote before the pitch competition where he stressed the need for lighter weight and more advanced equipment for soldiers in the field. He warned the contestants, saying, “I've sat in sessions where we sat with a bunch of Joes, with a bunch of soldiers, and one of them would pick up the latest piece of great gear and say, ‘who's the genius who came up with this piece of crap?' Don't be that genius.”

All of the finalists deserve recognition for their innovative technological solutions that could one day improve efficiency for major problems facing the government and the world. Here is a little bit about the seven finalists: