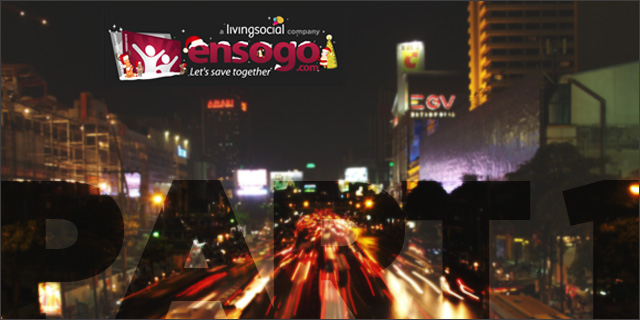 Founded in 2009, Southeast Asian daily deal site Ensogo was approached by LivingSocial and acquired in June 2011 for an undisclosed amount. At the time, cofounder Paul Srivorakul reports, they had about an 85% market share in Thailand, 50-60%t in the Philippines, and 45-50% in Indonesia.

Now, with a team of over 450, Ensogo is vying to stay on top and integrate into the LivingSocial network. Below, Srivorakul – a serial entrepreneur and future angel investor – shares some stories on what it’s like to be acquired by LivingSocial.

Tech Cocktail: What was the acquisition process like? Why did you choose LivingSocial?

Srivorakul: What we liked about them from the very beginning is they are very entrepreneurial and very innovative. We were in talks with everyone from Groupon, Yahoo!, to all these other guys before we chose LivingSocial, and the reason we chose them was just because they were very data-driven. Any decision that is made, it has to be backed up by data. These guys were really smart, so right off the bat we were very impressed.

Even though globally they weren’t the #1 brand like Groupon or even Yahoo! – as much as people think Yahoo! is not a big brand over there, in Southeast Asia they are – it was really just similar cultures: kind of scrappy, startup-type. They [LivingSocial] were just overall really nice people.

Groupon was very aggressive. In some ways, Groupon was like, “If you don’t let us acquire you, we’re going to kill you” kind of mentality. And I know that’s not really Groupon USA, that was more Groupon international, the German guys spearheading their M&As. When we got a chance to talk to the head of business development in the US – that’s how I could tell it was a completely different culture; we just didn’t fit with them.

But LivingSocial, they had the guys come out here and it was cool to see all their latest products and technologies. They got hands-on with us and walked us through where the model was heading. It was really interesting, whereas Groupon was all financial talk (but again that was Groupon international).

Tech Cocktail: What’s it like to be a LivingSocial company?

Srivorakul: LivingSocial has a regional Asia team that is very hands-on at helping with the integration – meaning to get the best practices from the US. I think one of the biggest challenges we have with acquisitions is to be able to take the learning from worldwide, or from the US, and actually get it executed locally – whether you’re migrating platforms or getting all the bells and whistles they have, which is Instant or Gourmet.

We’ve also learned a lot from their other acquisitions. TicketMonster [from Korea] is really aggressive in retail, and we’re learning a lot from them on how to execute in retail, because there aren’t that many Amazon-type companies out here. I think the ecommerce market is still ripe for disruption.

Tech Cocktail: What has been the biggest change since the acquisition?

Srivorakul: I would say just having to abide by brand guidelines. When you’re doing your own startup, you don’t have to worry about how to use the logo, how many centimeters from the left or right. There’s more approval processes for certain things, whether you’re trying to do an offline billboard ad or an online ad. The other one is that they significantly know online marketing much better – SEO, SEM, Facebook ads. So we get the headquarters helping us with all the keywords and customer-acquisition type of marketing.

Tech Cocktail: What has been most surprising and most challenging about the acquisition?

Srivorakul: I was surprised about how fast we moved into integration – hats off to them, because they hired an Asia team to help bridge the communication gaps between the US and us. We were the fifth or sixth startup they acquired, so they pretty much got the hang of executing that process.

Most challenging? You have weekly reports – just all the reporting stuff. It’s more rigorous, but it’s understandable.