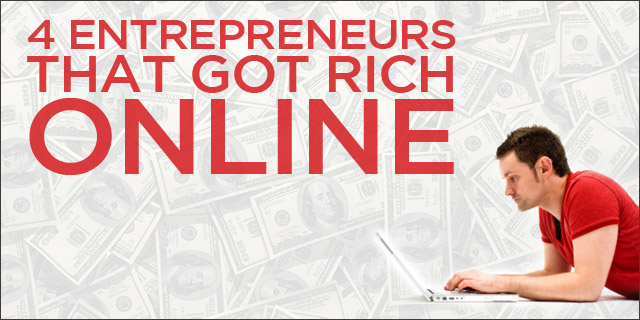 The rise of the Internet in the 1990s was a watershed event in human history for many different reasons. Information that once required a trip to the library could now be obtained while sitting at home with your desktop computer. Pop culture entertainment, once almost exclusively confined to television sets and movie theaters, is now streamable (and stealable) online. Companies that seek a competitive advantage must at least have a website.

Another way in which the Internet changed the game is that it opened a new door for entrepreneurs. People who innovated, with a dose of hard work and a sprinkle of smart marketing, have earned fortunes thanks to cyberspace becoming a household tool.

Here are four examples of people who became rich because of the Internet.

The Tumblr founder and CEO started as an intern at Frederator (the studio of Fred Seibert). Shortly thereafter, he started developing software to help people win at card games like poker and blackjack.

Karp then went to work for UrbanBaby, an online forum for parenting. He was given a couple of days to do a software development project and Karp completed it in four hours. As a result of this impressive performance, John Maloney (the head of UrbanBaby) promoted him and gave him shares in the company.

In 2006, UrbanBaby was sold to CNET and Karp left the firm to start his own software consulting business, called Davidville. This is when he took an interest in tumblelogging (short-form blogs). Karp and a coworker started developing their own tumblelog platform, and that platform was launched as Tumblr in 2007.

As of this writing, Tumblr has more than 110 million users. It was recently purchased by Yahoo! for $1.1 billion.

Certainly among the youngest of the Internet millionaires, Nick d'Aloisio struck it rich by selling his mobile app to Yahoo! The app, called Summly, was designed by d'Aloisio as a means to shorten content while he was studying for school. The incident reinforces the old maxim that necessity is the mother of invention. Apparently that's true in cyberspace as well.

Although it has not been disclosed how much Yahoo! paid for the app, British media reported that the deal was in the millions. Some sources said the amount was as high as $30 million. The app, as of this writing, has been downloaded about a million times in one year.

This Miami-born entrepreneur created his first website at the ripe old age of 10. He was already coding when he was in junior high school and started making contributions to Netscape (remember that company?) shortly thereafter.

Ross interned at Netscape for a while (at this point, he was 14) and eventually enrolled at Stanford. He became rich and famous by cofounding the Mozilla Firefox project because he was less than impressed with the direction Netscape was going after its purchase by America Online.

In 2003, Firefox was born. The following year, it was released. As they say, the rest is history. Ross is now worth tens of millions of dollars.

While he was still a high school student in 1998, Timothy Sykes took about $12,000 he had received in bar mitzvah gifts and decided to start day trading penny stocks. That initial investment would eventually earn him more than $1 million by the time he was in his early twenties.

As a senior in college, Sykes established his own hedge fund, called Cilantro Fund Management LLC. The fund focused primarily on short positions. Between 2003 and 2006, Cilantro was ranked number 1 fund in its category by Barclays, the British multinational banking and financial services company.

As of this writing, Sykes is a millionaire many times over. Today, he offers educational courses about how people can become rich by trading stocks.

Guest author Drew Hendricks is a tech, social media, and environmental addict. He's written for many major publishers such as National Geographic and Technorati.